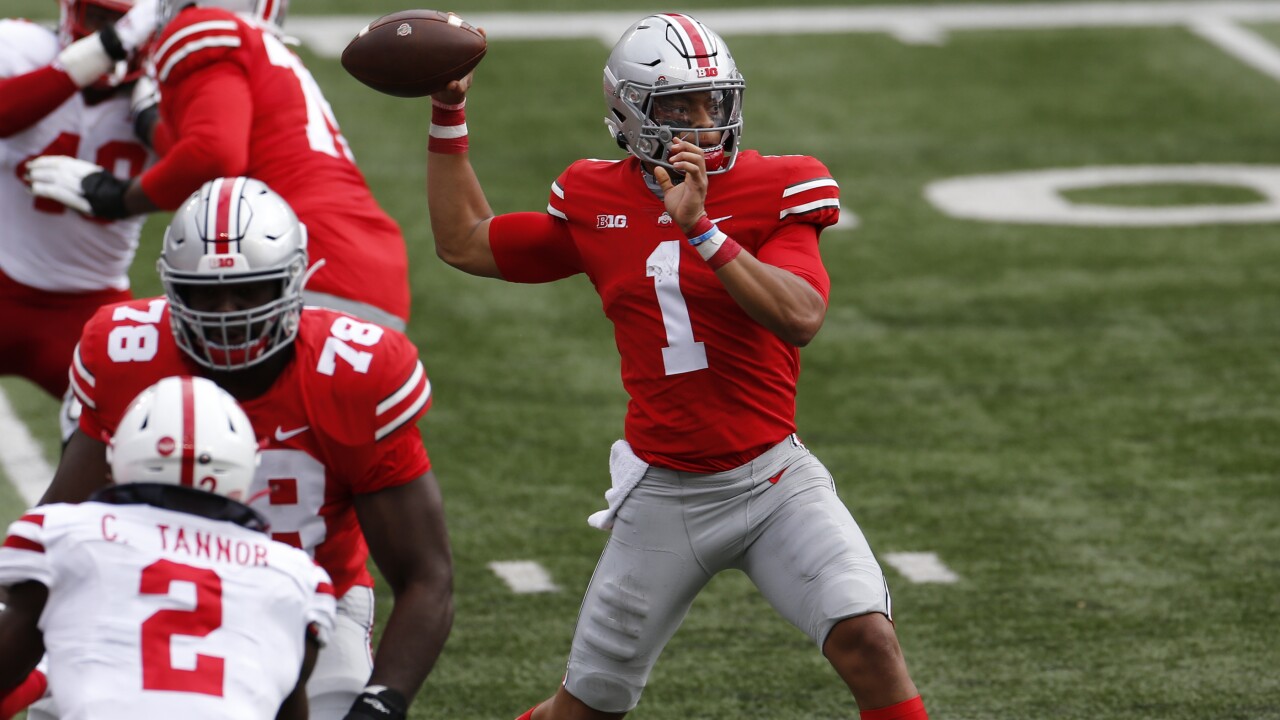 Now that Justin Fields has arrived, the Heisman Trophy race can begin.

Though the front-runner might not be the quarterback you think.

Fields made up some ground Saturday, with a spectacular season debut for No. 5 Ohio State against Nebraska.

He went 20 for 21 for 276 yards and a couple of touchdowns. His only incomplete pass was a deep ball that hit Chris Olave in the hands in the end zone, but the receiver couldn’t hold on after hitting the turf hard.

Fields also ran for 54 yards and a score, with a nice spin move to get into the end zone.

Fields and fellow Georgian Trevor Lawrence came into the season as the presumptive Heisman favorites, but with the Big Ten starting late Fields will only get nine games tops to make his case. That could be enough.

Meanwhile, Lawrence had his worst game of the season throwing the first pick-6 of his career and averaging only 6.7 yards per attempt as No. 1 Clemson messed around before putting Syracuse to sleep. Of course a ‘bad’ game for Lawrence was still pretty good.

So who’s the Heisman favorite at this point? Probably Alabama’s Mac Jones.

Jones is surrounded by blue-chippers and he had a high bar to clear in Tuscaloosa as Tua Tagovailoa’s replacement. But he’s not just another guy. The junior has three 400-yard passing games already and just missed another, going for 387 against Tennessee.

The big news out of that game was Alabama star Jaylen Waddle breaking his ankle. The injury ends his season and deprives college football of one of its most thrilling players.

There is no upside to Waddle’s injury, but if Jones can keep up his torrid pace and excellent play without him it will only bolster his Heisman resume.

BYU’s Zach Wilson and UCF’s Dillion Gabriel, who is putting up crazy numbers, deserve to be on the radar of Heisman voters but it sure looks like trophy will go to one of the quarterbacks playing for the three best teams in the country: Clemson, Alabama and Ohio State.

Tom Allen pulled one over on James Franklin and No. 8 Penn State and Indiana pulled out a victory against a Top-10 team for the first time in 33 years.

The Hoosiers’ coach let Penn State score a late touchdown just to get the ball back. After Nittany Lions freshman running back Devyn Ford obliged, Michael Penix Jr. and the Hoosiers made all the big plays, and Indiana had its biggest victory since beating Ohio State in 1987.

Franklin’s been one of the best coaches in the country, though he does draw some criticism for handling of late-game situations.

Whether that’s always fair is debatable. In this case, no doubt Penn State blew the end-game. Franklin said he went over the do-not-score scenario with his offense, but clearly not enough.

And really Penn State didn’t even need to run a play. Four quarterback kneel downs from the IU 14 would have given Indiana about 15 seconds to get into field-goal position with no timeouts.

Then in OT, Allen went for 2 and the win to break a 41-game losing streak against AP Top 10 teams.

“We’ve been close, and I’m sick and tired of being close,” Allen told reporters. “In my gut, it seemed like the right thing to do.”

The Nittany Lions are now staring at an 0-2 start with Ohio State coming to Happy Valley next week.

Just when the SEC looks as if it is turning into the Big 12, the best team in the conference best known for wide-open offense and suspect tackling is doing it with the defense.

No. 6 Oklahoma State remained the only unbeaten team in the Big 12, grinding down No. 17 Iowa State.

During Mike Gundy’s long run as Cowboys coach, Oklahoma has been a quintessential Big 12 squad. Spread offense. Up-tempo. Not much D.

The Cowboys came into the game leading the nation in yards per play allowed at 4.05. Other than a couple long runs by Cyclones star Breece Hall, defensive back Tre Sterling, linebacker Malcolm Rodriguez and the Pokes mostly held Iowa State in check.

To be clear, this isn’t 2011 Alabama-level defense, but the Cowboys make their opponents uncomfortable.

“We haven’t made plays (in past years) like the ones we made today,” Gundy said.

If the Big 12 wants to get a team in the playoff, Oklahoma State is pretty much the only hope.

AROUND THE COUNTRY: No. 18 Michigan might finally have a quarterback to get truly excited about in Joe Milton. Same goes for No. 14 Wisconsin in Graham Mertz. ... No. 9 Cincinnati won the AAC’s battle of unbeatens against No. 16 SMU, but that race has plenty of twists and turns left. The Bearcats still have Houston, Memphis, UCF and Tulsa left to play. ... Two coaches who really needed victories had good weekends: Tom Herman’s Texas team buried Baylor to snap a two-game losing streak. Maybe more importantly, the Longhorns players stayed on the field for the playing of the “Eyes of Texas” after a week of drama in Austin about song. In the SEC, Auburn got a late score to beat Ole Miss and take some heat off Gus Malzahn. For the second time in three weeks, the Tigers got the benefit of a fortuitous replay decision on a play that could have decided the game. Regardless, Auburn is 3-2 ... Rutgers snapped a 21-game Big Ten losing streak by winning at Michigan State in coach Greg Schiano’s first game in his second stint at the school. Not to take anything away from the Scarlet Knights but no Big Ten team was positioned to fail this season more than Michigan State. The Spartans had a late coaching change to Mel Tucker after Mark Dantonio stepped down in February. Then the pandemic hit and wiped out the spring and summer. Even in a typical year this would have been a rebuilding season in East Lansing. Now, the Spartans will be fortunate to win a game or two ... No. 25 Coastal Carolina played it first game as a ranked team and stayed unbeaten by beating Georgia Southern without quarterback Grayson McCall. The Chanticleers (5-0) have as many victories this season as the last two combined. ... From the ACC’s random-results generator: Wake Forest 23, No. 19 Virginia Tech 16. ... No. 3 Notre Dame found all the big plays in the passing game it needed to crush Pitt. The Irish get Georgia Tech next week before the big one against Clemson in South Bend, Indiana ... No. 20 Kansas State scored 55 points against Kansas with 17 first downs and fewer than 400 yards of offense thanks to two punt return touchdowns by Phillips Brooks. ... Pat Fitzgerald earned his 100th victory as Northwestern coach in a rout against Maryland. CBS Sports noted that in 15 seasons with the Wildcats, Fitzgerald has 18.5% of the program’s all-time victories. ... The Mountain West kicked off with Boise State as a big favorite and the Broncos looked the part against Utah State. ... From the 2020 is Weird file: On the day the Big Ten season started, Army accepted a bid to the Independence Bowl.

Follow Ralph D. Russo at https://twitter.com/ralphDrussoAP and listen at https://westwoodonepodcasts.com/pods/ap-top-25-college-football-podcast/