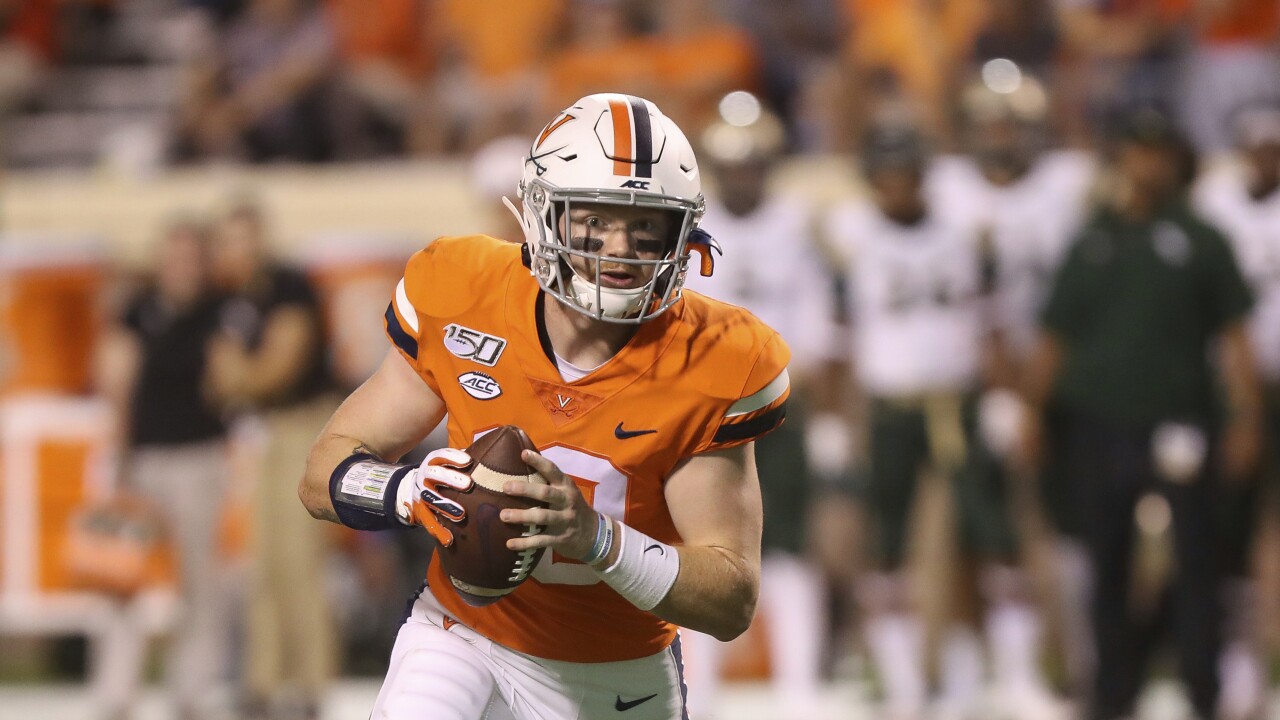 Andrew Shurtleff/AP
FILE - Virginia quarterback Brennan Armstrong (10) is shown during an NCAA college football game against William & Mary in Charlottesville, Va., Friday, Sept. 6, 2019. Armstrong will take over behind center, and while the lefthander does not possess the speed or explosiveness that highlighted Bryce Perkins’ two years in Charlottesville, he’s been effective enough through training camp to beat out dual-threat graduate transfer Keytaon Thompson from Mississippi State for the starting job. (AP Photo/Andrew Shurtleff, File)

CHARLOTTESVILLE, Va. (AP) — Brennan Armstrong ran for two touchdowns and passed for another and Virginia beat Louisville 31-17 on Saturday in a game that was pushed back a week by a COVID-19 outbreak among the Cardinals.

Armstrong scored on runs of 8 and 9 yards, the latter with 4:29 remaining to give Virginia (3-4, 3-4 Atlantic Coast Conference) a two-score cushion. He also hit Lavel Davis Jr. with a 9-yard scoring pass that gave the Cavaliers a 21-10 lead in the third quarter.

Quarterback Malik Cunningham gave the Cavaliers fits all day as he ran for a career-high 197 yards for the Cardinals (2-6, 1-6), but his first-quarter interception was returned 85 yards for a touchdown by Noah Taylor and he had the ball ripped out of his hands by Nick Grant at the end of 27-yard run, setting up Armstrong’s second rushing score.

The Cardinals were without seven players, but did not detail if any of the missing were COVID-related.

Armstrong, who rushed for 60 yards, finished 15 for 23 for 203 yards with an interception.

Louisville rushed for 317 yards and outgained the Cavaliers 478-368, but couldn’t overcome the turnovers

Louisville: The Cardinals caught a break late in the first quarter when Armstrong hit Tony Poljan with a 20-yard pass and Poljan fumbled trying to get into the end zone. The play was originally ruled an incomplete pass, but was overturned on review. Jack Fagot recovered for Louisville, which managed one first down before punting then intercepted Armstrong on the next series and went ahead 10-7 on Cunningham’s 19-yard run.

Virginia: The Cavaliers had only two penalties, but one was costly. Armstrong hit Davis for 24 yards on third-and-9 from the Cardinals’ 30, and when the 6-foot-7 freshman stood up after the catch, he appeared to taunt defensive back Russ Yeast and was flagged for unsportsmanlike conduct. That moved the ball from the 6 to the 21 and six plays later, Brian Delaney kicked a 23-yard field goal to give the Cavaliers a 24-17 lead.

The Cardinals are at home against Syracuse on Friday night.

Virginia is at home against Abilene Christian next Saturday.