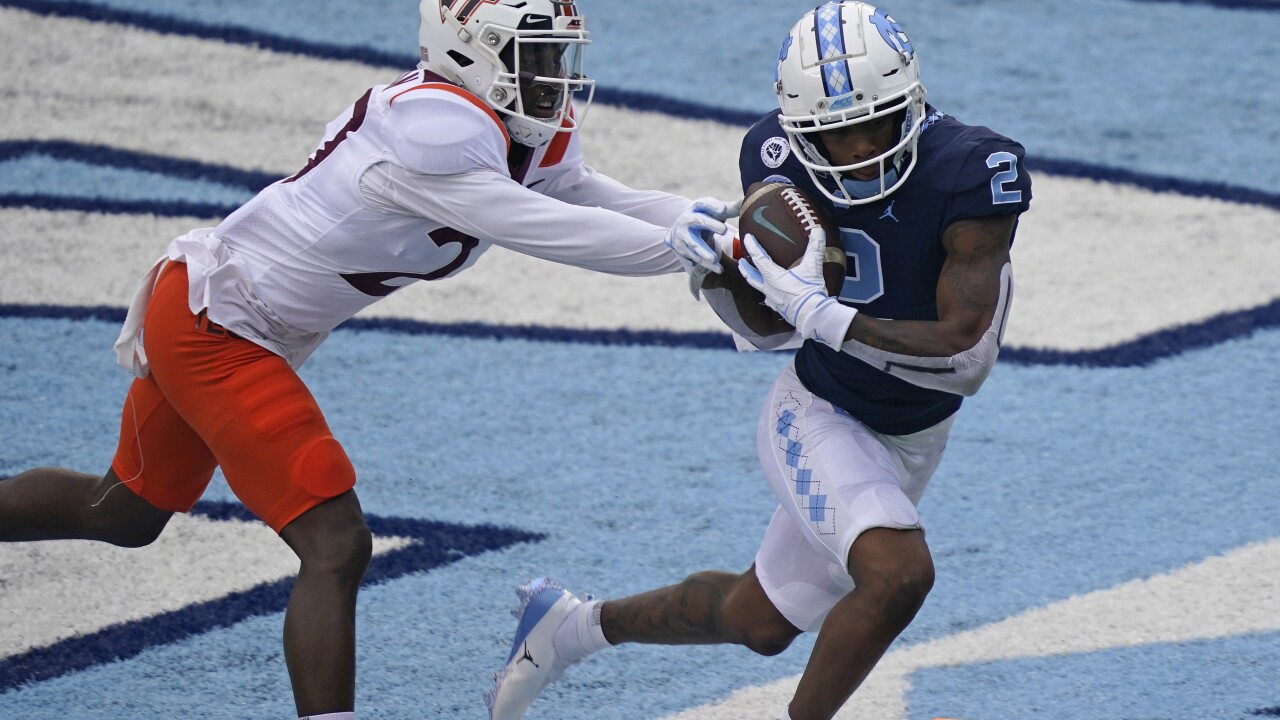 CHAPEL HILL, N.C. (AP) — Michael Carter ran for a career-high 214 yards and two touchdowns -- including a 62-yarder midway through the fourth quarter -- to help eighth-ranked North Carolina beat No. 19 Virginia Tech 56-45 on Saturday.

The Tar Heels (3-0, 3-0 Atlantic Coast Conference) leaned on a dominating running game. Javonte Williams also ran for a career-best 169 yards and two scores of his own, with both backs finding gaping lanes and weaving through defenders to keep the chains moving on the way to 399 yards on the ground.

UNC said it was only the second time in program history that the Tar Heels had seen two players crack the 150-yard mark in the same game, the other coming 39 years earlier.

Throw in Sam Howell’s three touchdown passes, and UNC finished with its highest scoring output ever against the Hokies along with 656 total yards — the No. 2 total ever posted against Virginia Tech’s defense, which was severely depleted in the secondary.

Carter’s huge run around the right side with 8:49 left finally gave the Tar Heels some cushion after they had seen the Hokies rally from a 42-17 deficit early in the third quarter to make it a one-possession game entering the fourth quarter.

Khalil Herbert ran for 138 yards and two touchdowns for Virginia Tech (2-1, 2-1), which again played shorthanded due to a combination of coronavirus and injury issues. Hendon Hooker, a returning starting quarterback who had yet to play this year, threw for two scores and ran for another.

This was UNC’s first home game since Gov. Roy Cooper announced the state would ease public -gathering restrictions related to the pandemic by allowing schools to fill 7% of their stadium capacity for fans. That cleared the way for 3,535 fans scattered about the 50,500-seat Kenan Stadium.

Virginia Tech: The Hokies have gone from being down 23 players and two full-time coaches against North Carolina State, to 21 players and two coaches against Duke, and then 15 players Saturday. Hooker’s return was a promising sign as he took over fully for Braxton Burmeister after halftime, along with the Hokies’ third-quarter run of 20 straight points -- fueled by an onside-kick recovery — to pull within 42-37 entering the fourth. But the defense gave up way too many big plays nearly all day as coach Justin Fuente had to piece together a secondary with few options at safety.

UNC: The Tar Heels had won five straight games dating to last year, with four straight lopsided margins followed by a close win at Boston College last weekend. They looked on their way to another blowout with three straight scoring drives to open the game while taking leads of 21-0 and 35-14 despite being down three defensive starters. That third-quarter stumble aside, the Tar Heels rolled much of the day with an offense that looked equally as prolific whether throwing or running.

The Tar Heels turned in an impressive performance for much of the day that could inch them up in the AP Top 25, while the Hokies could slide after trailing the entire way.