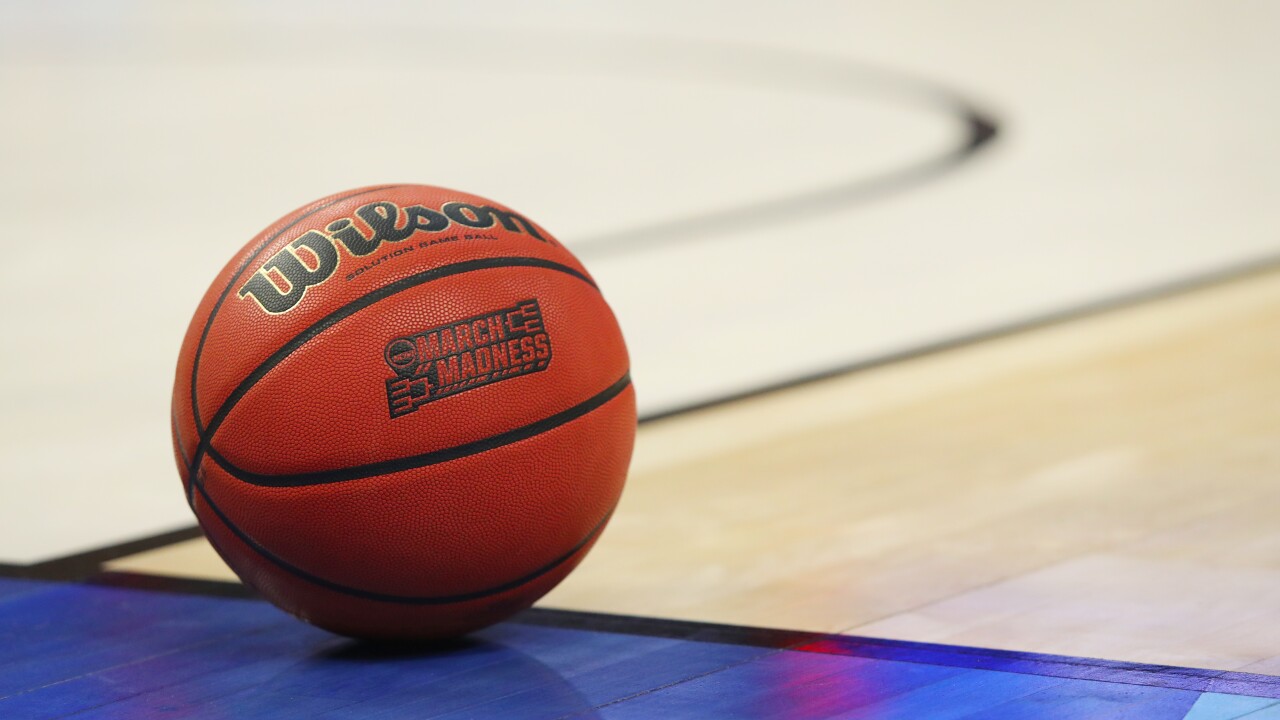 Bill Wippert/AP
A closeup view of an official game ball with the March Madness logo during a second-round men's college basketball game between Villanova and Wisconsin in the NCAA Tournament, Saturday, March 18, 2017, in Buffalo, N.Y. (AP Photo/Bill Wippert)

AMHERST, Mass. (AP) - For the second consecutive weekend, there won’t be any fans at Amherst’s NCAA Tournament games on campus because of the coronavirus outbreak.

The school is hosting Division III Sweet 16 games, with the Mammoths playing George Fox on Friday night. Mary Hardin-Baylor will face Christopher Newport in the other women’s basketball game. The semifinals are on Saturday.

“I respect the decision of Amherst College to prohibit spectators. However, the NCAA has made a deeply disappointing decision that will diminish the student-athlete experience. Our student-athletes have worked very hard to earn this extraordinary opportunity to participate in the NCAA national tournament. They should be able to celebrate that experience with members of their family, schoolmates and fans.”

"NCAA member schools and conferences make their own decisions regarding regular season and conference tournament play. As we have stated, we will make decisions on our events based on the best, most current public health guidance available. Neither the NCAA COVID-19 advisory panel, made up of leading public health and infectious disease experts in America, nor the CDC or local health officials have advised against holding sporting events. In the event circumstances change, we will make decisions accordingly."

“Given the rapidly changing nature of the COVID-19 situation, administrators at Amherst College made the very difficult decision to prohibit spectators from attending the NCAA games at our facilities out of an abundance of caution and being mindful of the health of the Amherst community, including the teams that competed,” Amherst said in a statement.provided by interim director of athletic communications Melissa Martin.

“We sincerely regret the disappointment and the difficulties these decisions may have caused. At this point, NCAA Tournament games at Amherst will proceed with this change, and we hope fans of the programs playing will nevertheless watch and support their teams via the live stream.”

Amherst hasn’t had any cases of the virus yet, but out of an abundance of caution the school decided to not allow fans at the games. That didn’t sit well with Mary Hardin-Baylor coach Mark Morefield.

“Every school has their right to decide. The three schools stand together to share with NCAA and Amherst that this isn’t fair,” he said in a phone interview with The Associated Press on Monday night.

“How do we tell parents that they can’t watch their daughters? It might be last time they see their daughter play. We’re going to stand together that this isn’t right. If you’re not capable of hosting, move the venue to somewhere closer to campus. Somewhere in Springfield. There are several other possibilities within that area to go ahead and move it to.”

Amherst and the NCAA said moving to another local site wasn’t discussed.

“The priority of NCAA championships is the health and well-being of student-athletes, team personnel, host communities and all who attend NCAA championship events. We rely on the host schools to determine their own safety and security protocol for events on their campus,” the NCAA said in a statement to the AP.

Tufts, which is about 90 miles from Amherst, is hosting a regional this weekend and spectators are allowed in the gym.

At least the three teams heading to Amherst have time to inform fans they won’t be allowed at the games. For the first-round contest, the school only gave the teams a few hours’ notice that the games would be played in an empty gym.

Amherst, which averages about 250 fans at home games, wasn’t the only school to play its opening NCAA Tournament games in an empty gym. Johns Hopkins hosted the Division III men’s basketball opening weekend games and didn’t let fans in.

Mary Hardin-Baylor played its first two games in San Antonio and fans were allowed at that site. Morefield didn’t understand why, especially since he said they were 10 minutes from where people were quarantined for the virus.

“It doesn’t seem to make sense,” Morefield said. “There is a heightened concern because of the virus, which is rightfully so. But you see other venues that are taking the precautions set forth by CDC.”

Morefield said there was an already-scheduled conference call with the schools to go over logistics about the weekend’s games. He said it got contentious for a brief time while discussing the closed gym, but the call quickly went on to other things.

The basketball games aren’t the sporting events closed to fans this week. Amherst has a first-round NCAA Tournament women’s hockey game Wednesday that also won’t have fans. The Mammoths allowed fans at baseball and softball games and a lacrosse game this past weekend.

“We are beyond disappointed that the NCAA is allowing Amherst College to block the student-athletes’ parents, families, and friends of each of the four teams from watching what could be the final game of their careers,” George Fox athletic director Adam Puckett said in a statement provided to the AP.

“Parents have made countless sacrifices of their money and time to support their daughters from a young age, and the fact that the NCAA is allowing Amherst to host and ban spectators for a second consecutive week is unacceptable.”

Amherst had medical personnel at the gym last weekend for the for the first two rounds of the NCAA Tournament. The workers were available to take the temperature of any members of team traveling parties who didn’t feel well. Medical staff also will be on hand this weekend.