Fantasy Football: Players to start and sit for NFL Week 2 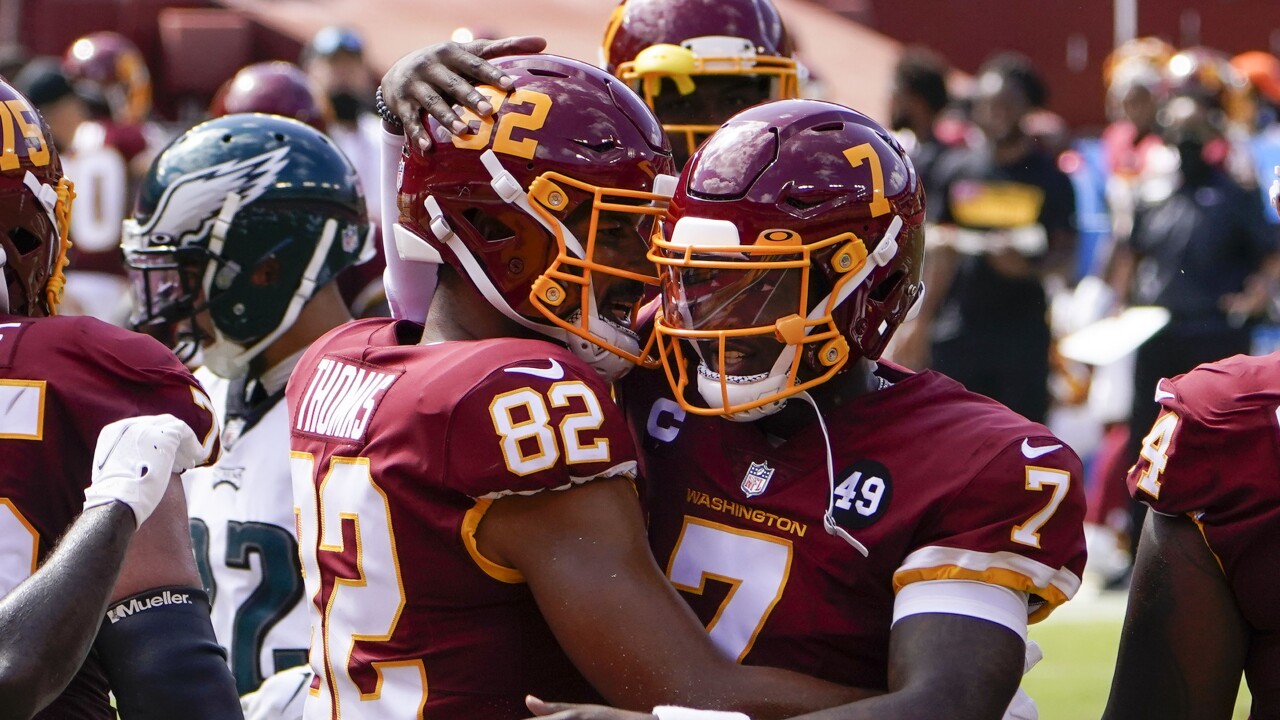 HAMPTON ROADS, Va. (AP) - One week into the fantasy football season tends to bring premature panic along with some excessive celebration, especially when it comes to a sleeper pick that delivered.

While most fantasy owners tend to keep a level head about their Week 1 results, fine-tuning a roster for Week 2 isn’t the worst thing in the world.

Come late Monday night, some trends will be in place, enabling fantasy owners to properly separate the proverbial wheat from the chaff. Though early, Week 2 will feel like a make or break vibe for some players (see Wentz, Carson).

START: Matt Ryan, QB, Falcons: The Cowboys didn’t allow a passing touchdown in Week 1 but did allow a league-worst 13.8 yards per completion. That’s potential trouble against Ryan, who comes off a 454-yard effort in Week 1 loss and will use WRs Julio Jones, Calvin Ridley and Russell Gage upon a suspect Dallas secondary.

START: Benny Snell Jr., RB, Steelers: Snell was basically the Pittsburgh running game in Monday’s win over the Giants, accounting for all but one of the team’s 20 rushing attempts after starter James Conner (ankle) was sidelined. The Broncos gave up 116 yards to Derrick Henry in their loss to the Titans, but could be in more dire straits with Snell, especially if QB Ben Roethlisberger opens the passing lanes early to allow Snell’s running to exploit the Denver defense.

SIT: Adrian Peterson, RB, Lions: Peterson’s 93 yards on 14 carries were a pleasant Week 1 surprise, but don’t count on a Week 2 repeat. Peterson managed just 31% of the Lions’ RB snap counts and the fact that Packers QB Aaron Rodgers will feast on an injury-riddled Detroit secondary means the Lions could be playing catch-up for most of Sunday afternoon.

START: Emmanuel Sanders, WR, Saints: With All-Pro Michael Thomas (ankle) sidelined for Monday night’s matchup at the Raiders, Sanders will see more than the mere five targets he had in Week 1. Sanders also gets a sweeter matchup as the Las Vegas defense had the ninth-most fantasy points allowed to opposing receivers in Week 1.

SIT: DK Metcalf, WR, Seahawks: Seattle’s second-year wideout had five catches for 95 yards and a score in Sunday’s win over the Falcons, but facing the Patriots’ secondary is a different challenge. New England allowed just 126 receiving yards in its win over the Dolphins, and it’s a sure thing that All-Pro Stephon Gilmore will be covering Metcalf for much of Sunday night.

START: Logan Thomas, TE, Washington Football Team: One of the more popular waiver wire adds, Thomas led Washington with eight targets in Week 1. The Cardinals have struggled against opposing tight ends in recent years, and only an injury to 49ers All-Pro George Kittle kept them from being hurt again in Week 1. Thomas’ athletic presence likely means they won’t dodge it twice.

SIT: Noah Fant, TE, Broncos: Fant had a solid Week 1, catching five passes for 81 yards and a touchdown, but the return of WR Courtland Sutton will cut into his production. The Broncos will also be facing a Steelers defense that did a stellar job of locking down Giants TE Evan Engram in Week 1, making Fant a considerable risk.

START: Austin Ekeler, RB, Chargers: He’s a gold-plated must-start in PPR formats against a Chiefs defense that he caught 17 passes for 151 yards against last season. Ekeler will still get the bulk of the ground game versus a KC run D that allowed 5.4 yards per carry to the Texans, the second-worst average in Week 1.

SIT: Christian Kirk, WR, Cardinals: The presence of DeAndre Hopkins made Kirk a non-factor as he had just one catch for zero yards on five targets. There’s nowhere but up for Kirk, yet it’s not enough to consider starting him versus a Washington Football Team that had the ninth-best fantasy showing against opposing wideouts in Week 1.

START: CeeDee Lamb, WR, Cowboys: Lamb was on the field 82% of the time in his NFL debut, catching five targets for 59 yards. With TE Blake Jarwin (ACL) done for the season, expect Lamb to be targeted more frequently, a trend that should begin against a Falcons secondary that allowed the fourth-most fantasy points to opposing wideouts in Week 1.

SIT: Jordan Howard, RB, Dolphins: Howard did score in Week 1, but 7 yards on eight carries isn’t going to cut it. The emergence of Myles Gaskin, who had 63% of Miami’s RB snap counts compared to Howard’s mere 15%, translates to Howard getting only a handful of touches against a Bills defense that allowed just 3.5 yards per carry and 52 total rushing yards to the Jets in Week 1.

START: Philip Rivers, QB, Colts: Don’t expect Rivers to ease up after throwing for 363 yards on 36 of 46 passing in Week 1. The loss of RB Marlon Mack (Achilles tendon) means Indianapolis will further emphasize its passing attack against a Vikings defense that allowed a league-high 54.5% of its third downs to be converted in their loss to the Packers.

SIT: Baker Mayfield, QB, Browns: Don’t be the fantasy owner whose Week 2 slips into a hole on Thursday night. Thus far in his brief career, Mayfield has been a mediocre passer in September, managing a paltry 6.48 yards per attempt and a 7-9 TD:INT number. Even in deeper leagues, there will be better Week 2 options for fantasy users to consider, including the option of streaming Daniel Jones (Giants) or even the quarterback Mayfield will face on Thursday, Bengals rookie Joe Burrow.

This column was provided to The Associated Press by SportsGrid Inc., www.sportsgrid.com