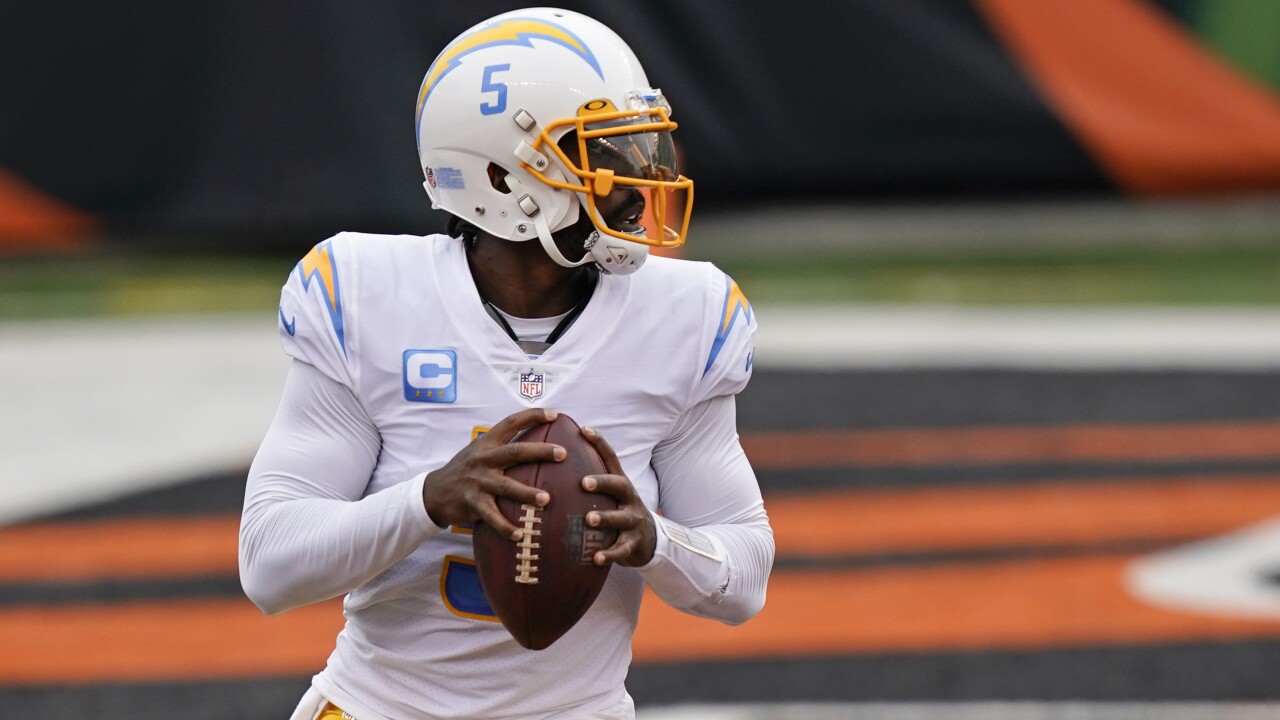 CINCINNATI (AP) — Playing with a starting quarterback other than Philip Rivers for the first time since 2005, the Los Angeles Chargers mustered just enough offense — and got just enough breaks.

The Chargers got it done against the Cincinnati Bengals on Sunday but showed they still have plenty of work to do behind journeyman Tyrod Taylor.

Taylor — LA’s starter for now, with rookie Justin Herbert awaiting his opportunity — and running back Austin Ekeler chipped away at the improved Bengals defense and found just enough cracks to escape with a 16-13 win. The Chargers got a break when Randy Bullock missed a 31-yard field goal that would have tied the game with 7 seconds left, thwarting a last-minute rally by Bengals rookie quarterback Joe Burrow.

Taylor, who has had stints with Baltimore, Buffalo and Cleveland, was a mundane 16 for 30 for 208 yards. Rookie Joshua Kelley ran for the only Chargers touchdown, and Michael Badgley booted three field goals.

“Early on in the game, a little out of synch,” Taylor said. “And I’ll take full blame for that. We have to be better on third down, and that starts with me. We can do that. As the game progressed more and more we were able to get on the same page.”

The Chargers’ biggest play of the first half was a 36-yard pass from Taylor to Mike Williams. But the drive stalled and LA settled for a 24-yard field goal by Michael Badgley.

Late in first half, Taylor couldn’t convert a fourth-and-short on a keeper. On the next series, Taylor hooked up with Henry for a 33-yard gain but again had to turn to Badgley for a field goal.

The Chargers finally got over the hump with a drive capped by a 5-yard scoring run by Kelley that tied the game at 13 with 12:23 left.

“We needed that touchdown,” Taylor said. “It came at the end of a long drive, and to be able to finish that with a touchdown was definitely big for us and a momentum swing forward. I wasn’t pretty by any means.”

Joe Mixon’s fumble on the first play of the Bengals’ next drive gave the ball back to Los Angeles, which had three shots inside the 5-yard line but had to settle for another field goal.

“They were just trying to find things that work because in the beginning of the game, things were going our way,” Bengals linebacker Josh Bynes said. “They were trying to find what was going to work, and they found that. They executed well when they needed to, and that’s why they won the game.”

LA coach Anthony Lynn said Taylor’s avoidance of turnovers — Cincinnati gave the ball away twice — was one of the keys to the game, along with the running of the Kelley, who finished with 60 yards in his NFL debut.

“We have to execute better,” Lynn said. “It will get better. We’ll clean it up.”

“It’s crazy my first game is a nail-biter,” he said. “I was just hoping for some type of (kick) block or some craziness. I was hugging my position coach. Just happy. Just so happy to get a win, especially in the first game of the season.”