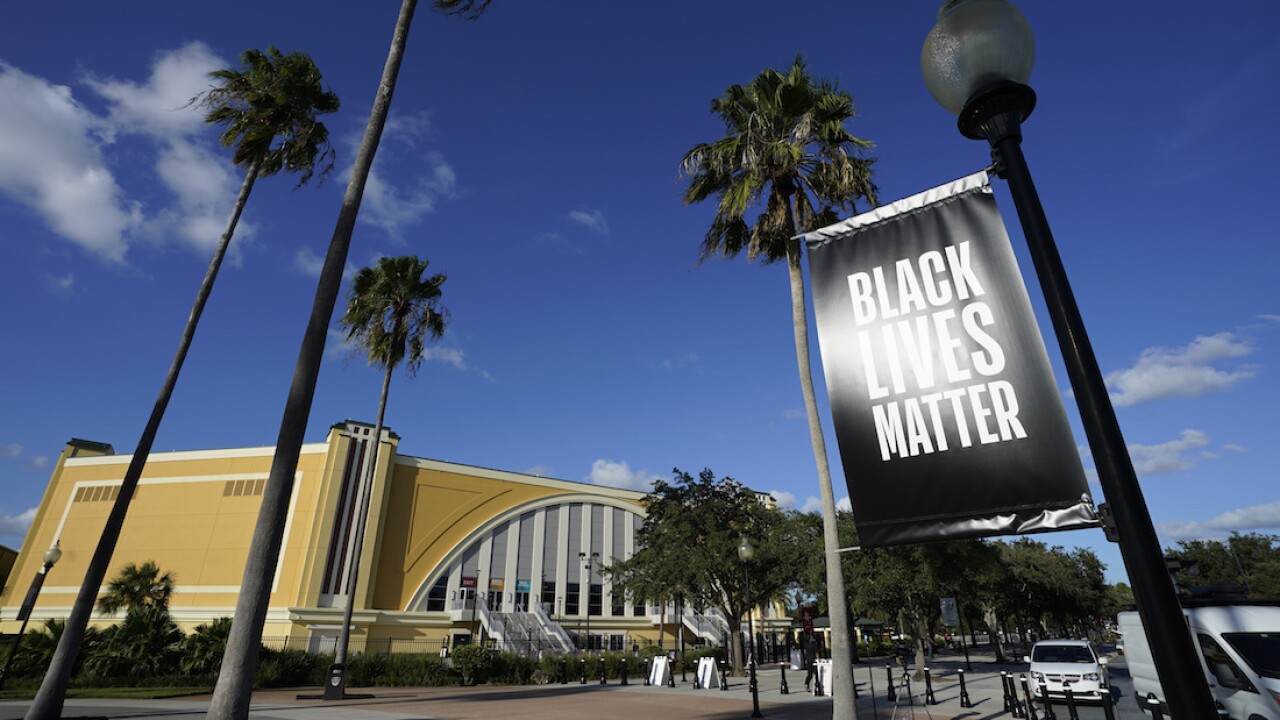 Copyright 2020 The Associated Press. All rights reserved.
Ashley Landis/AP
A Black Lives Matter banner hangs outside of the arena after a postponed NBA basketball first round playoff game between the Milwaukee Bucks and the Orlando Magic, Wednesday, Aug. 26, 2020, in Lake Buena Vista, Fla. The game was postponed after the Milwaukee Bucks didn't take the floor in protest against racial injustice and the shooting of Jacob Blake, a Black man, by police in Kenosha, Wisconsin. (AP Photo/Ashley Landis, Pool)

The sports world came to a halt on Wednesday as leagues postponed games as players protested the shooting of a Black man by cops in Kenosha, Wisconsin.

The unprecedented move began when the Milwaukee Bucks refused to play their game against the Orlando Magic. In a statement, the team said they were protesting the police shooting of Jacob Blake.

Here's where leagues currently stand amid the protests:

NBA
After three games were postponed on Wednesday and reports that the Lakers and Clippers voted to end the playoffs, the NBA's season was up in the air.

By Thursday, however, players reportedly agreed to continue playing.

The league announced on Twitter that Thursday and Friday's games were also postponed.

On Friday, the league announced that games would resume on Saturday.

According to the press release, the league and players are coming together on three key issues: establishing a social justice coalition that will focus on increasing access to voting, promoting civic engagement, and advocating for meaningful police and criminal justice reform, arenas will convert into voting sites for 2020 general election, and creating ad spots to promote "greater civic engagement in national and local elections and raising awareness around voter access and opportunity."

“These commitments follow months of close collaboration around designing a safe and healthy environment to restart the NBA season, providing a platform to promote social justice, as well as creating an NBA Foundation focused on economic empowerment in the Black community, the league said. “We look forward to the resumption of the playoffs and continuing to work together -- in Orlando and in all NBA team markets -- to push for meaningful and sustainable change.”

The Athletic's Shams Charania released the times of the games being played on Saturday.

At first, it did not look like the league wouldn't follow in the NBA's footsteps, with the match between Orlando City SC and Nashville SC going on as scheduled.

But when players for Atlanta United and Inter Miami decided not to play, the league reversed course. MLS issuing a statement saying that the remaining games between Dallas-Colorado, Real Salt Lake-LAFC, San Jose-Portland, LA Galaxy-Seattle would be postponed.

In a statement, the league stated games would resume Friday.

The protests are more personal for the Brewers and Mariners. The Brewers play 40 miles away from where Blake was shot and the Mariners have the most Black players in the league.

On Thursday, MLB players decided to donate their salaries on Aug. 27 and Aug. 28 to The Players Alliance to combat racial inequality..

NHL
The National Hockey League has postponed Thursday and Friday's playoff games after members of the Hockey Diversity Alliance asked the league to suspend its games in the wake of a Black man being shot by police in Wisconsin over the weekend.

The league faced backlash on Wednesday when it allowed several games to happen and held a moment of reflection, instead of postponing them as several other clubs had done.

On Friday, the league announced that games would resume Saturday.

WNBA
Before players for the Washington Mystics and Atlanta Dream were to play their game, they decided they would not take the court. The league then announced that all three games were postponed.

The league said the games would be rescheduled.

On Thursday, the league issued a statement saying all of Thursday's games were postponed.

According to Local 24's Jalyn Souchek, players from Ole Miss walked out of practice and chanted "no justice, no peace" at the town square.

#BREAKING Ole Miss football team walked out of practice today to protest for racial justice and an end to police brutality. Team is chanting “no justice no peace” at town square pic.twitter.com/t2B3JVJadA

University of Oklahoma players and coaches did not practice but instead marched around campus together.

According to OU lineman Creed Humphrey, the entire team registered to vote on Friday.

It should be noted that the protests occurred on the fourth anniversary of former San Francisco 49ers quarterback Colin Kaepernick sitting during the national anthem as in a demonstration of social injustice and police brutality.