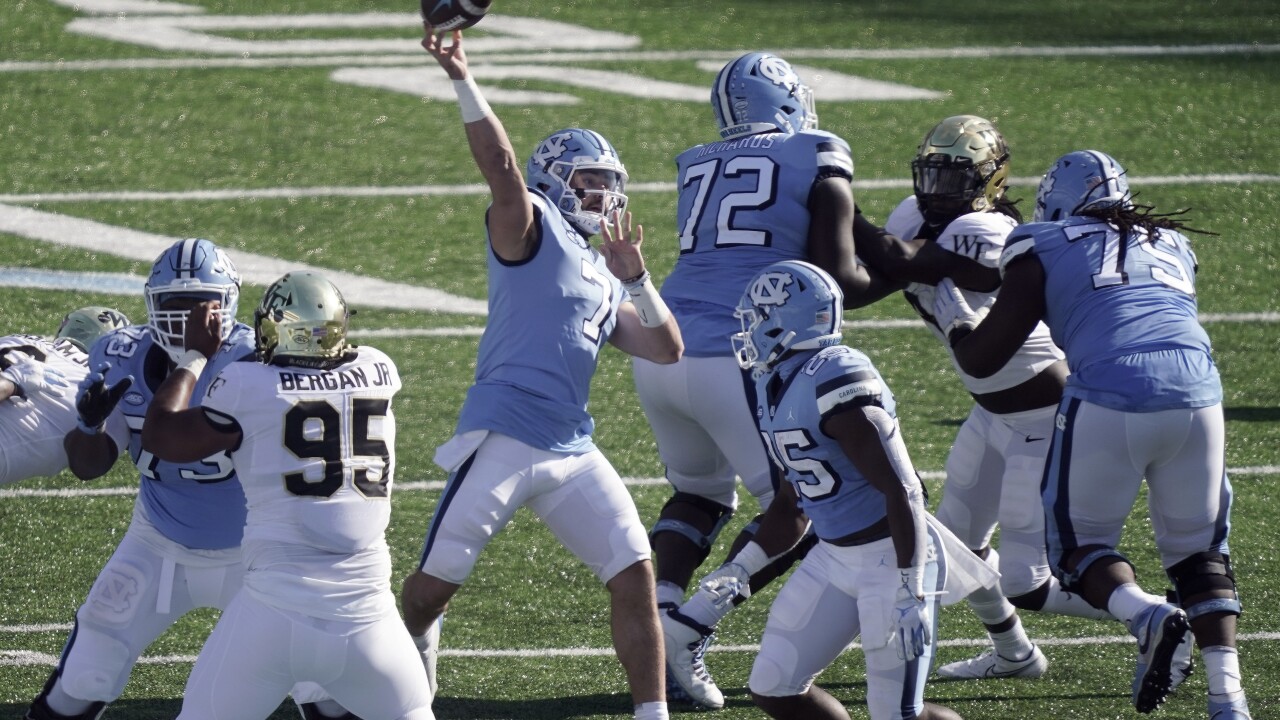 The sophomore threw for program records of 550 yards and six touchdowns and scored the go-ahead rushing TD with 4:11 left to help North Carolina rally past Wake Forest 59-53 on Saturday, capping a comeback from 21 down in the third quarter.

Howell’s 20-yard keeper helped the Tar Heels (6-2, 6-2 Atlantic Coast Conference) match their biggest comeback in program history. It was part of a run of 35 unanswered points after falling behind 45-24, with Howell and the Tar Heels’ offense rolling nearly all day at a record-setting pace.

“Sam and I have talked a lot about a legacy for a guy like him,” coach Mack Brown said. “And his legacy will be how many games he wins. And that’s what quarterbacks are remembered for.”

The Tar Heels finished with a program-record 742 yards, with Brown calling it “one of the best offensive performances that I’ve ever been around.” Yet more importantly, the Tar Heels completed comebacks after frantic rallies fell short in losses to Florida State and Virginia in the past month.

“I think a lot of teams would’ve just just quit ... but we just kept fighting back on both sides of the ball,” Howell said, adding: “I’m just proud of the way we were able to fight back.”

Sam Hartman threw for a career-best 429 yards and four touchdowns to lead the Demon Deacons (4-3, 3-3), who had their own huge offensive output with 606 yards. His second to Donavon Greene was an 18-yarder that pushed Wake Forest to its 45-24 lead with 6:56 left in the third quarter.

But UNC’s defense hung in and finally slowed the Demon Deacons, forcing punts on the next four drives to give the Howell-led offense an opening. Then, after Howell’s go-ahead keeper, Chazz Surratt sacked Hartman on fourth down to set up Williams’ score that made it a two-possession game.

Hartman led one final scoring drive, but Williams recovered the onside kick with 56 seconds left to all but end a wild afternoon in the longtime instate series.

“Give North Carolina a lot of credit,” Wake Forest coach Dave Clawson said. “They’re a really good football team. And even when we were up 21, you don’t feel like any lead is safe against them.”

Wake Forest: The Demon Deacons entered this one with four straight wins, three coming in ACC play, and just one turnover all season. They looked poised to beat the Tar Heels for the second straight season before that five-drive drought, while the defense couldn’t take Howell and the Tar Heels out of rhythm as UNC made its move.

UNC: Brown talked this week about wanting to see his team “grow up and mature” and build off a win against Duke without having a setback. They flirted with exactly that, falling behind big as they did at FSU (down 24) and Virginia (21) with those games ending as three-point losses. But they responded, with receiver Dazz Newsome saying: “We most definitely feel like we can come back on any amount of points that we are down by.”

“I thought we took a huge step forward today,” Brown said, “because we didn’t come close. ... We actually won, and that’s something that we hadn’t been doing.”

Both team’s receivers came up big.

Newsome (10 catches for 189 yards) and Dyami Brown (eight catches for 163 yards) each had two TD grabs for UNC, including a 75-yard score for Newsome in the first quarter.

Jaquarii Roberson had 12 catches for 167 yards and two scores for Wake Forest, while Greene added eight catches for 170 yards before suffering a second-half injury.

After going up 21, Wake Forest had three-and-outs on three of its next four drives that all ended in punts. That included Hartman’s chain-moving pass bouncing off Nolan Groulx’s arms to set up UNC’s fourth-quarter drive for a tying TD.

“Just missed throws here and there,” Hartman said. “And that comes back on me. I think there were opportunities still there. I just missed a couple and that’s what it is.”

UNC: The Tar Heels have an open date before hosting No. 2 Notre Dame on Nov. 27.