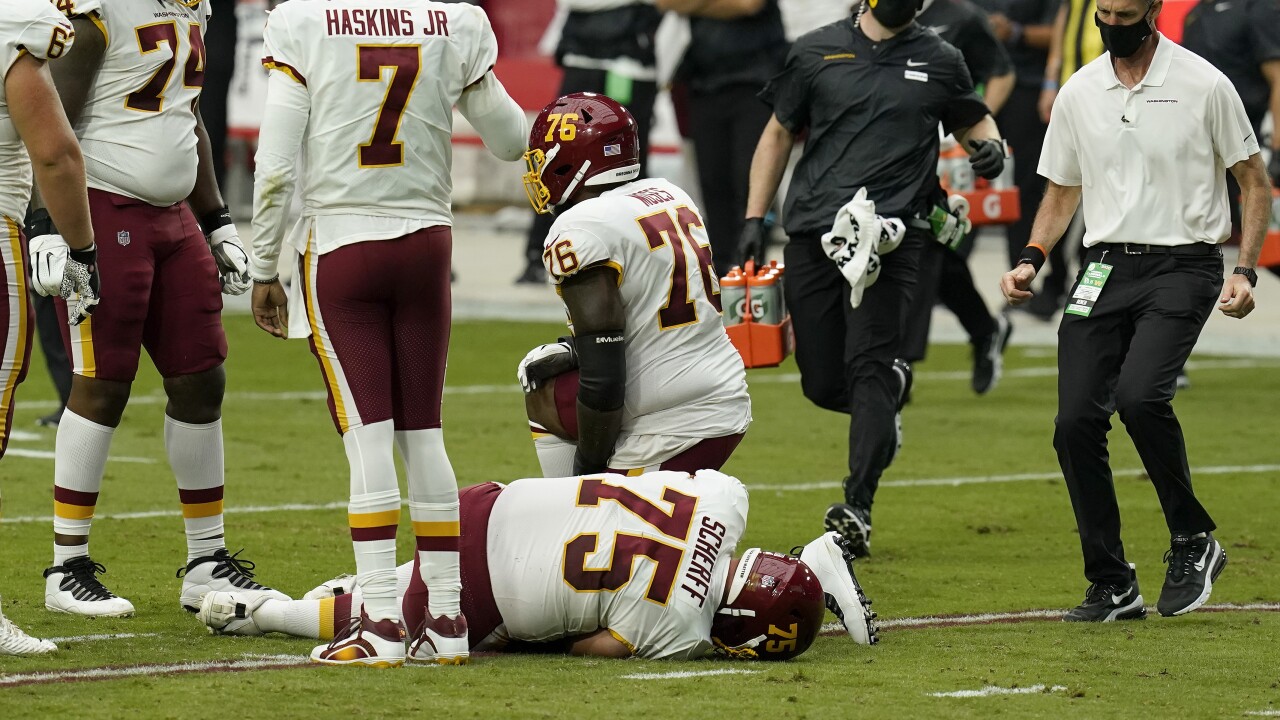 Ross D. Franklin/AP
Washington Football Team offensive guard Brandon Scherff (75) lies on the turf after an injury against the Arizona Cardinals during the first half of an NFL football game, Sunday, Sept. 20, 2020, in Glendale, Ariz. Washington will be without its best offensive lineman for at least a couple of weeks after guard Brandon Scherff injured his right knee and missed the second half of a 30-15 loss at Arizona. AP Photo/Ross D. Franklin)

LOUDOUN COUNTY, Va. (AP) - Washington’s best offensive lineman writhing on the ground in pain wasn’t a sight the coaching staff or players needed to see at any point this season, let alone this early.

Standout guard Brandon Scherff missed the second half of the 30-15 loss at Arizona on Sunday with a right knee injury and will be out at least a couple of weeks, according to coach Ron Rivera. It’s not good news, but it’s not as bad as some of the other major knee injuries around the NFL because Scherff isn’t expected to be out long term.

“We’ve got some good news on him,” Rivera said Monday. “It’s positive. He’s going to miss a couple of weeks or something like that, but it’s all positive. We’ll go from there.”

Tuesday, the team officially placed Scherff on Injured Reserve. According to NFL rules, he will miss at least three weeks of action.

While blocking on a play late in the first half, right tackle Morgan Moses inadvertently pushed Cardinals defensive end Angelo Blackson onto Scherff’s right leg, and he got rolled up on. He was replaced at right guard by veteran free agent pickup Wes Schweitzer.

“I love him. I think he is a good, physical football player,” Rivera said of Schweitzer. “He’s a guy that hasn’t had a lot of opportunities because he was injured during camp for about a week. He missed some practice time, but he’s come back and worked himself into position. I think he will do a good job for us in lieu of (Scherff), if that’s what the case is.”

Not having Scherff against Cleveland and Baltimore will hurt, and it’s far from the only problem Washington is facing. The team has certainly come back down to earth after scoring 27 consecutive points in Week 1 to come back and beat Philadelphia.

Rivera is wondering if he and the other coaches are asking too much of a young team too soon.

“We want to make sure that the things we’re doing right now are enough for our guys to have success,” Rivera said. “We don’t want to get ahead of ourselves thinking, ‘Oh we’ve got this; we can put this in now.’ We’ve got to look at us too. It’s not just all about the players, it’s about the coaches too. I wanted to make sure everybody knew that. I’m not looking to blame anybody or throw anybody under the bus.”

Washington has shown it can make halftime adjustments to mount a comeback. It wasn’t enough against the Cardinals, but it may be a sign of progress.

“We’re starting to figure out that we can move the ball and change the line of scrimmage, run hard and they can’t tackle us,” quarterback Dwayne Haskins said. “We started to run the ball better. We just have to find a way of getting to that mentality earlier.”

The bad starts that are making those comeback attempts necessary are not a recipe for success. Washington allowed Arizona to score the first 20 points after Philadelphia had the first 17 a week earlier.

Turnovers are another problem with two costly fumbles Sunday.

“We’re a good football team, but we’re not experienced enough to overcome helping the other team beat you,” Rivera said. “I told the players today, ’At the end of the day, it’s tough enough to try to beat somebody, but when you help them, that’s even tougher.’”

Washington knew it had a top receiver in 2019 third-round pick Terry McLaurin, and now the rest of the league is treating him like one. McLaurin got some tough man-to-man coverage and sometimes double coverage when the game was still in reach. Fantasy owners will still appreciate the seven catches for 125 yards and a touchdown he wound up with, and it’s evidence of what he can do.

“We weren’t expecting (man coverage on McLaurin) until third down,” Haskins said. “Once we got adjusted to that, we got to a point where we got to the ball, and we were in man coverage matchups and them basically asking us to beat them, and we didn’t.”

Haskins lost a fumble and made some other rookie-type mistakes in the second start of his second pro season. Rivera acknowledged he’s putting a lot on Haskins’ plate and wants to figure out what makes him shaky early in games.

“It’s almost as if he’s so hype that he goes through his progressions really quickly or he’s trying to get the ball out of his hands sooner than he needs to,” Rivera said. “You want him to be a little bit more patient because he’s making good reads. He’s making good decisions. But he’s either going through it too quickly, and not delivering a good ball early on.”

Cornerback Kendall Fuller missed a second consecutive game with a knee injury, and that hurt Washington’s secondary as Kyler Murray ran for two touchdowns and threw for another against a defense that was dominant in Week 1.

7 — Total first-half points for Washington through the first two games of the season.

Rivera and offensive coordinator Scott Turner have to figure out what’s behind the bad starts, particularly with Haskins. On defense, Jack Del Rio needs to adjust and get more of the kind of performance against Philadelphia than against Arizona.