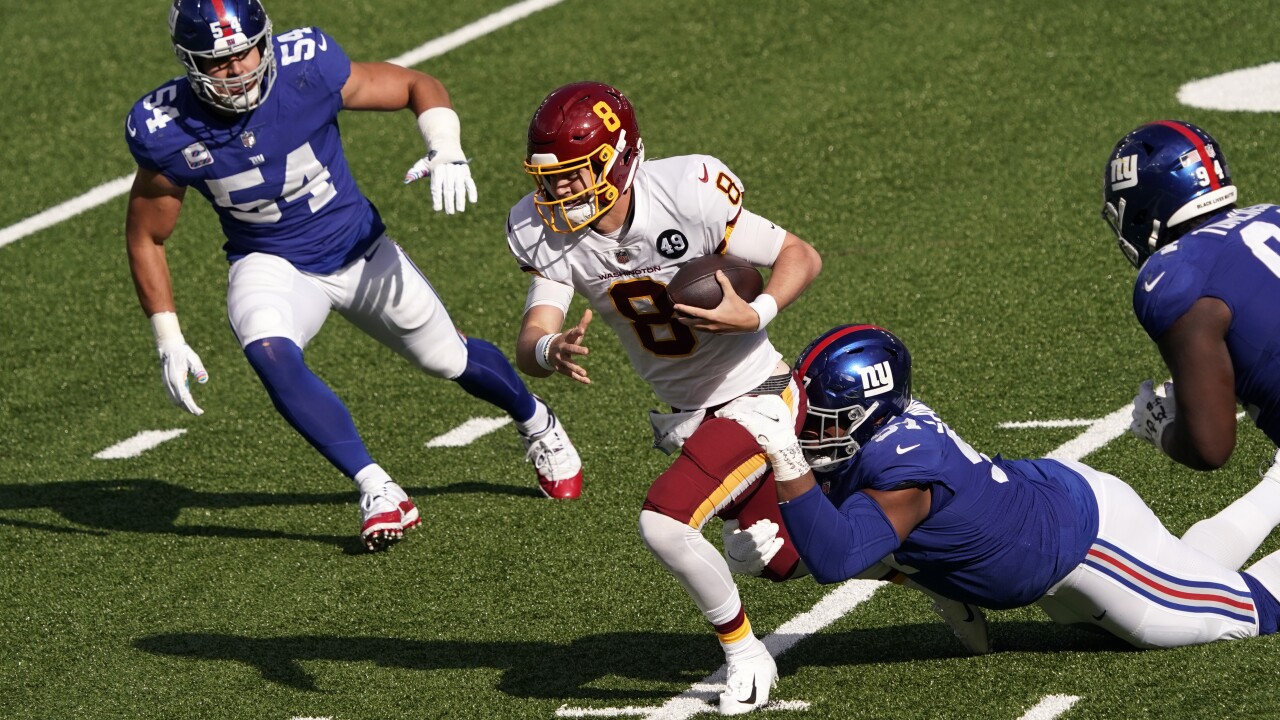 That’s enough to likely keep his job as Washington’s starting quarterback. It remains to be seen if Allen can win games like coach Ron Rivera wants.

Allen threw for 280 yards and a touchdown, lost a fumble and threw an interception in the 20-19 defeat that came after he missed the 2-point conversion Rivera called for in the final minute. Washington is 1-5 with the first-place Dallas Cowboys visiting Sunday, when Allen is expected to start once again.

“His statistics are pretty darn good: He was 31 of 42 for 280 yards,” Rivera said. “Unfortunately, he did have the interception and the fumble, but we totaled 337 total yards. That gives us an opportunity, if we’re scoring points, to be competitive in a game, and I think we got what we wanted out of it in terms of being competitive.”

Washington is only competitive in the NFC East because it’s the worst division in the NFL. Second-place Philadelphia is only a half-game up on New York and Washington, and the close race is why Rivera pulled the plug on second-year QB Dwayne Haskins four weeks in to hand the job to Allen.

When Allen injured his left arm midway through a blowout loss to the Rams, Alex Smith came in and finished the game. Rivera turned back to Allen against the Giants, and it’s clear — for better or worse — the 24-year-old is his guy.

“You start to figure out what defenses are trying to do a little bit more,” he said. “For me, to be able to be in there for the whole time and really try to give us a chance to win in the fourth quarter, that’s all I can ask for.”

Elements of the defense are coming together after holding Daniel Jones and the Giants to 99 net yards and intercepting him in the second half. Cornerback Kendall Fuller had the pick, and defensive end Ryan Kerrigan picked up a sack in vintage fashion.

Remember when Washington released Adrian Peterson to put the ball in the hands of running backs by committee? That was all well and good when Rivera was trying to build for the future, but now he’s trying to win now and his team ranks last in the league in rushing yards.

Tight end Logan Thomas caught a 29-yard TD pass from Allen before halftime against the Giants and might be a useful part of the offense in the aftermath of Jordan Reed’s offseason release and Vernon Davis’ retirement.

“I believe Logan can do that stuff all the time,” Allen said of Thomas catching the ball over defensive back Julian Love and scoring with a perfect toe drag in the end zone. “He’s kind of like a rebounder, so we wanted to give him a chance.”

Veteran safety Landon Collins is having a rough season. Collins struggled to catch up to Jones on a 49-yard run a week after taking a bad angle on a 56-yard TD pass from Jared Goff to Robert Woods.

Collins was supposed to be a model of consistency on an improving defense. Instead, he’s been part of the problem.

Two rookies are down and probably out for at least the Cowboys game. Receiver Antonio Gandy-Golden injured a hamstring, and offensive lineman Saahdiq Charles’ job as starting left guard ended on the second play of scrimmage against the Giants with a left leg injury.

2 — As in the 2-point conversion Rivera said he went for because Washington was on the road. There were no fans in the stadium.

Figure out what direction to take the season. Rivera snapped so quickly from developing youth and teaching to needing to win games, that backfired and now it’s a matter of how many losses it will take to revert to the original plan.