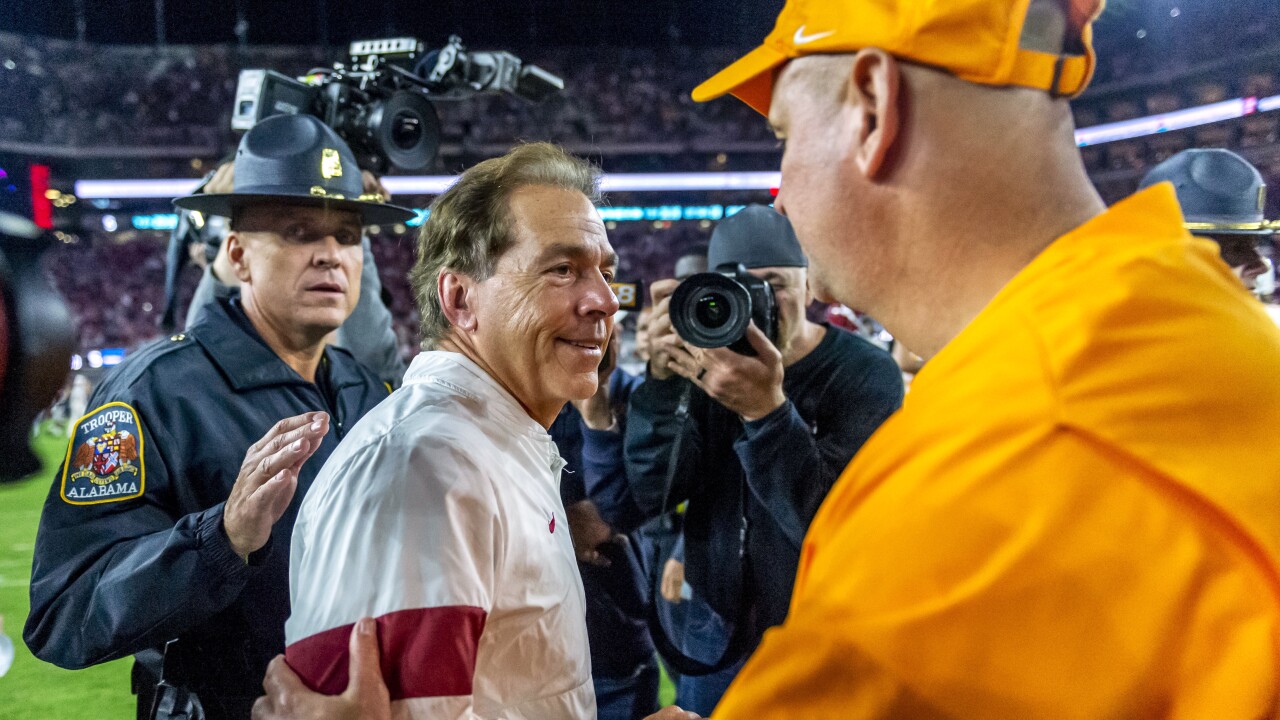 KNOXVILLE, Tenn. (AP) - By the numbers, Alabama-Tennessee (3:30 p.m. - LIVE on News 3) isn’t much of a rivalry anymore with the Crimson Tide having won 13 straight.

Don’t tell that to Alabama fans.

“I know it’s real big for the state of Alabama,” said Crimson Tide nose guard D.J. Dale, a native of Birmingham, Alabama. “I look at it as them just being the next opponent, just taking it week by week and going into this week 0-0 and hopefully after the game we’re 1-0.”

The rivalry best known as the Third Saturday in October remains important to those remembering the tradition of victory cigars and the days of Bear Bryant, Johnny Majors, Ken Stabler and Peyton Manning.

Though Alabama (4-0) is ranked second and chasing another national championship while Tennessee (2-2) has dropped out of the Top 25, nothing changes with this game being played this season on the fourth Saturday of October in Knoxville.

“Everybody knows that this Tennessee game is a big rivalry game,” Alabama coach Nick Saban said. “It means a lot to a lot of people in the state of Alabama, and I’m sure that because it’s a rivalry game, we’re going to get the absolute best version of Tennessee’s team.”

Saban has never lost to Tennessee at Alabama, and Vols coach Jeremy Pruitt is 0-2 against Saban. The Volunteers understand nothing lasts forever, especially after Kentucky snapped Tennessee’s 17-game winning streak with a 34-7 rout.

“In the end, it’s all about us, and that’s all we have,” Tennessee center Brandon Kennedy said. “We have to stick together and come back so we can be successful next game.”

Some other things to watch for when Alabama travels to Tennessee:

Alabama has already had three games this season with a pair of 100-yard receivers, including DeVonta Smith and Jaylen Waddle against Georgia and Mississippi the past two games. Waddle and John Metchie III did it in the Texas A&M game. It’s only happened nine other times in program history.

“This is probably the best Alabama offense I’ve ever seen since I’ve been alive,” said Pruitt, a native of Rainsville, Alabama.

Tennessee senior quarterback Jarrett Guarantano was the unquestioned starter at the beginning of the season and didn’t turn the ball over once through a 2-0 start. But he’s struggled over the past two games with six of the Vols’ seven turnovers, and Pruitt said all four quarterbacks have gotten work in practice this week.

Brian Maurer, slowed by nagging knee and hamstring injuries through fall camp, has practiced the past couple weeks. He started last season at Alabama. J.T. Shrout was intercepted last week, and freshman Harrison Bailey has been trying to catch up in practice the past two weeks.

“Any one of them that’s behind me during games, I believe that they can do well,” Kennedy said of the Vols’ quarterbacks.

This is Saban’s fourth consecutive game against one of his former assistants. He moved to 22-0 with a 41-24 win over then-No. 3 Georgia and Kirby Smart. Pruitt had two stints on Saban’s Alabama staff and was defensive coordinator from 2016-17.

He took over his defensive line Sunday after firing Jimmy Brumbaugh, the same assistant Pruitt hired earlier this year. Pruitt said he wants more push in the middle from his line to help improve pass coverage. He also defended the firing with the athletic department losing millions due to limited attendance during a pandemic.

“No. 1, do what you think is best for our players,” Pruitt said. “Every decision that we’ve ever made around here is for the what’s best for our student athletes. And we’ll continue to do that.”

Alabama will put two extended streaks to the test. The Tide has won 28 consecutive games against teams from the SEC East and beaten a record 93 unranked teams in a row. Tennessee has not beaten Alabama since 2006, a 16-13 win in Knoxville, losing the last six in Neyland Stadium.