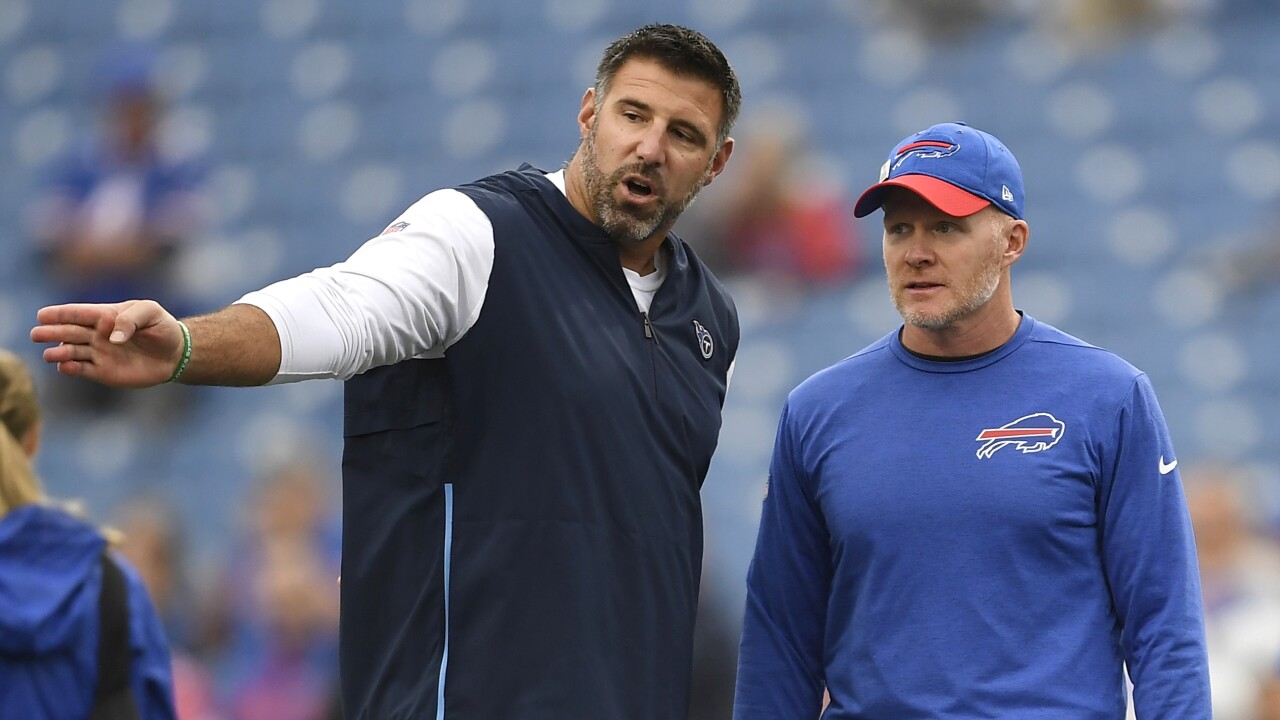 NASHVILLE, Tenn. (AP) — The Tennessee Titans have no positive tests, and they will host the Buffalo Bills as rescheduled for Tuesday night, a person familiar with the situation told The Associated Press.

The Bills (4-0) left for Nashville on Monday night, but the Titans needed another day without a positive test for the game to go forward. The Titans (3-0) had the NFL’s first COVID-19 outbreak with eight testing positive Sept. 29 when their facility was shut down and reached a total of 24 players and personnel.

Tennessee now has gone without a positive test on six of the past nine days, according to the person who spoke on condition of anonymity because neither the NFL the Titans commented on all the test results.

The Titans last played Sept. 27, a 31-30 win in Minnesota over the Vikings. They returned to their facility Saturday and were allowed by the NFL to practice Sunday with only players, coaches and trainers after a staff member tested positive.

The Bills have only had their schedule disrupted as they try to continue their best start in years. The Titans have become pariahs while dealing with the NFL’s first COVID-19 outbreak that kept them out of their own building much of the past two weeks.

Titans safety Kevin Byard said it’s been tough watching teammates test positive and worrying about them and their families while not knowing when they would play again. The NFL first postponed, then rescheduled their Oct. 4 game with Pittsburgh to Oct. 25, and their game with the Bills pushed back two days.

“At the end of the day, we’re not going to make any excuses man,” Byard said. “We’re going to come in here and focus on what we need to focus on, and that’s winning the ballgame.”

The Bills beat the Raiders 30-23 last week. This franchise hasn’t won five straight since 2004, and another win would give Buffalo its best start since 1991 when that team went to a Super Bowl.

“As a team that’s off to a good start, we feel like we’ve got a good thing rolling here and we want to play,” Bills quarterback Josh Allen said. “That’s our mindset.”

Buffalo has won three straight in this series, including a 14-7 win in Nashville a year ago as the Titans stumbled to a 2-4 start. Buffalo coach Sean McDermott has made clear Tennessee made it to the AFC championship game in January.

These Titans also are rested with their previous game Sept. 27 in a 31-30 win in Minnesota.

The Bills will be the first team to play the Titans since the NFL closed Tennessee’s facility Sept. 29. The Vikings have not had a positive test result since playing the Titans.

“They’re aware of certainly the situation down there, but they’re also confident in the processes that are in place, both at the league level, and and what we’re doing here,” McDermott said of his Bills.

The Titans have gotten three of the 13 players placed on the reserve/COVID-19 list back with defensive captain and lineman DaQuan Jones and long snapper Beau Brinkley activated Sunday. They still will be without starters defensive lineman Jeffery Simmons and wide receivers Corey Davis and Adam Humphries.

It didn’t take long for veteran cornerback Josh Norman to make his presence known in Buffalo. After missing the first three games with a left hamstring injury, the offseason free-agent addition forced and recovered a fumble and was in on four tackles in his Bills’ debut against the Raiders.

Norman earned additional playing time after starter Levi Wallace hurt his left ankle in the first quarter and has since been placed on injured reserve. Norman is attempting to kickstart his career following four sub-par seasons in Washington, which led him to being cut with one year left on his contract.

The extra rest could help the Bills too. Starting cornerback Tre’Davious White did not practice through Saturday and is listed as questionable because of a back injury.

Buffalo will be without starting weak-side linebacker Matt Milano (pectoral). His absence was notable in being sidelined with a hamstring injury in a 31-28 win at Miami in Week 2 when Ryan Fitzpatrick threw for 328 yards — the most against Buffalo since Jameis Winston had 384 in Tampa Bay’s 30-27 loss on Oct. 22, 2017.

THEY GOT A KICKER

The Titans lost to Buffalo last year when their kicker missed three field goals and had one blocked. Now they have veteran Stephen Gostkowski, who has made the game-winning field goal inside the final two minutes of each of Tennessee’s wins this season.

Gostkowski made a career-high six field goals against the Vikings, and he tied an NFL record as the 10th kicker to make three of 50 yards or longer in a game. He also was the fifth player in NFL history to hit those three in a single half. He’ll have his long snapper back too.

A major snowstorm that hit Buffalo in 2014 marked the previous time Buffalo had a game pushed back. So much snow fell, the Bills had to give up hosting the New York Jets on Sunday, Nov. 23, and instead play the following night at Detroit. The Doug Marrone-coached Bills beat the Rex Ryan-coached Jets 38-3.

Some six weeks later, Ryan was hired by Buffalo in replacing Marrone, who opted out of his contract.