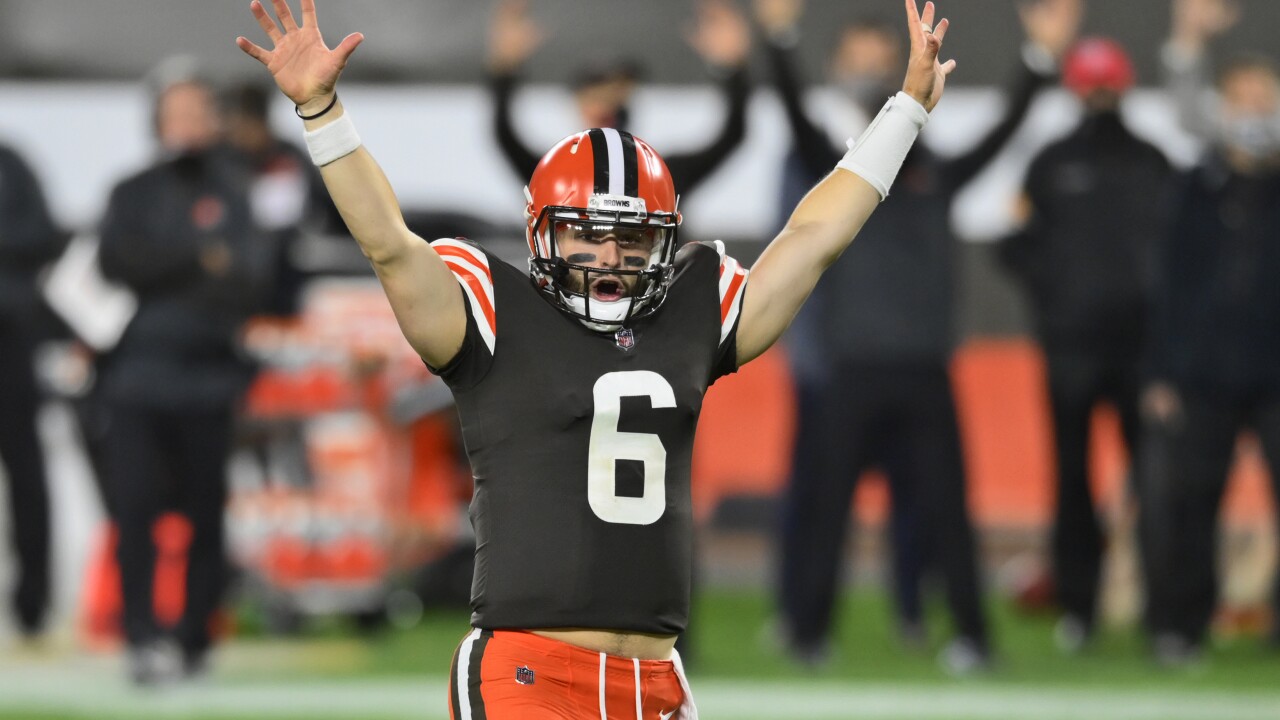 David Richard/AP
Cleveland Browns quarterback Baker Mayfield celebrates after running back Kareem Hunt scored a touchdown during the second half of the team's NFL football game against the Cincinnati Bengals, Thursday, Sept. 17, 2020, in Cleveland. The Browns won 35-30. (AP Photo/David Richard)

Mayfield connected with Odell Beckham Jr. o n a 43-yard scoring pass in the first half as the Browns (1-1) rebounded from an atrocious performance last week in Baltimore, where they were roughed up 38-6 by the Ravens and looked mostly inept in Stefanski’s debut.

“We’re not going to ride the wave,” Stefanski said. “We don’t look behind or look ahead.”

Things went much more smoothly for Mayfield and Cleveland’s offense against the Bengals (0-2) and No. 1 overall pick Joe Burrow, who threw three TD passes and showed incredible poise in just his second game.

Burrow’s third TD pass — a 9-yarder to Tyler Boyd with 43 seconds left — pulled the Bengals within five, but the Browns recovered the ensuing onside kick and ran out the clock.

Mayfield made it a priority to get the ball early to Beckham, who had only three catches for 22 yards in the opener. Beckham finished with four catches for 74 yards.

Mayfield completed 16 of 23 passes for 219 yards and one interception.

Chubb and Kareem Hunt were a potent 1-2 punch Cleveland. Hunt had a TD catch, ran for a score and rushed for 86 yards.

“They’re two talented backs that compliment each other and push each other,” Stefanski said. “We’re gonna look for ways to get those guys to rock.”

Burrow finished 37 of 61 for 316 yards. He wa s sacked three times, and had an unfortunate moment when he tried to call timeout and had the ball snapped past him. But the reigning Heisman Trophy winner matched Mayfield pass for pass and showed why the Bengals believe he can turn them around.

Burrow’s attempts were the second-most in history for a rookie. Only Carolina’s Chris Weinke (63) threw more in a game as a rookie.

Fittingly, the matchup between Ohio’s teams came as the NFL officially turned a century old. It was on Sept. 17, 1920, when an agreement during a meeting in Canton laid the groundwork for what became a multi-billion dollar business and America’s most popular sport.

There were 6,000 fans inside 68,000-seat FirstEnergy Stadium for Cleveland’s home opener after the Browns were granted a variance by the state of Ohio to have a gathering larger COVID-19 regulations allow.

Fans stayed socially distanced, masked for the most part and brought needed energy after both teams played in empty stadiums in Baltimore and Cincinnati a week ago. Some of the loudest cheers came after Beckham’s TD.

Mayfield’s scoring strike to Beckham in the second quarter was the kind of play the Browns envisioned the pair making more often.

After faking a handoff, Mayfield rolled left to buy time before lofting a perfect throw down the sideline to Beckham, who beat Bengals cornerback William Jackson III to give the Browns a 14-3 lead.

Burrow kept the Bengals in it with a 23-yard TD to C.J. Uzomah in the second quarter, but Cincinnati’s defense couldn’t slow down the Browns and Mayfield tossed a 6-yard TD pass to a wide-open Hunt gave Cleveland a 21-10 lead.

The Browns pushed it to 28-13 in the third quarter on Chubb’s second TD run, which came after Myles Garrett stripped Burrow near the goal line and Cleveland recovered.

The NFL traces its beginnings to a meeting in Canton, Ohio on Sept. 17, 1920. Commissioner Roger Goodell offered a toast to the league’s big birthday.

“To the more than 25,000 players who’ve ever played in this league: Your talent and tenacity are forever etched in our memories,” he said. “To the players of today: From the superstars adding to their legacies, to the dynamic young players blazing new trails – you are the backbone of the NFL. To the most loyal and passionate fans anywhere: The NFL would be nothing without you. ”

Due to the coronavirus, Bengals owner and president Mike Brown didn’t travel and missed his first regular-season game since 1968.

The 85-year-old Brown told the team’s website that not going was “wrenching.”

Brown had attended 824 consecutive games. The only one he had missed previously was in 1991, when he skipped a preseason game to be with his dying father, coaching great Paul Brown.

Bengals: Uzomah was carted off with a right Achilles tendon injury after making a catch in the fourth.

Browns: DE Adrian Clayborn went out with a hip in injury in the second quarter. He sacked Burrow before going out.