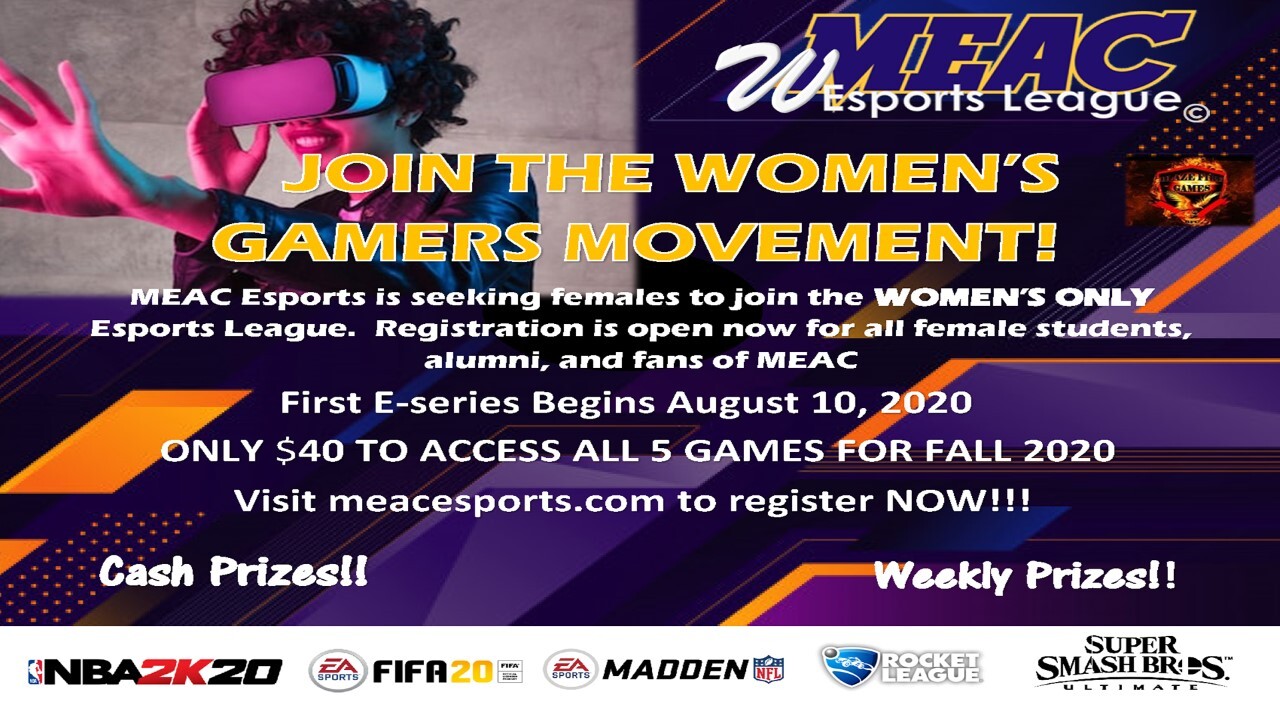 NORFOLK, Va. (MEAC Communications) – Registration for the Mid-Eastern Athletic Conference (MEAC) Esports Women’s League, in conjunction with Blaze Fire Games, is open today. Women are allowed to play in the MEAC Esports League alongside the men; however, to reach and involve more women in the gaming industry, establishing a women’s league would assist in accomplishing this goal. The MEAC Esports Women’s League will encourage women, especially women of color, to get involved in the business of gaming.

Registration is $40 and will cover all of fall 2020 (July 20-Dec. 20) for the MEAC Esports Women’s League. The first eseries will run from Aug. 10-Sept. 14, with players able to participate in competitions for such games as NBA2K20, FIFA 20, Madden NFL, Rocket League and Super Smash Bros. Ultimate.

Registration for the MEAC Esports Women’s League includes access to all five games, with players able to select up to three game concurrently.

The online nature of esports will allow for players to engage with one another safely from their own homes until all universities return to normal campus activity, at which point the esports program will include on-campus components. This league seeks to provide opportunities to women, particularly women of color, to learn not only gaming but coding producing tournaments, game music, and other aspects of gaming and esports.

In order to facilitate the online competition, the MEAC and Blaze Fire Games have selected GYO Score as their technology and league management platform partner. Through GYO Score, students will be able to participate in regularly-scheduled matches and directly challenge each other in ladder-style competitions that will promote a fun and competitive atmosphere.

Blaze Fire Games is a licensed digital content provider which taps into a variety of creative talent and skills across the globe. The company aims to connect a diverse group of participants by introducing them to a career path where they will learn to compete in a gaming environment.