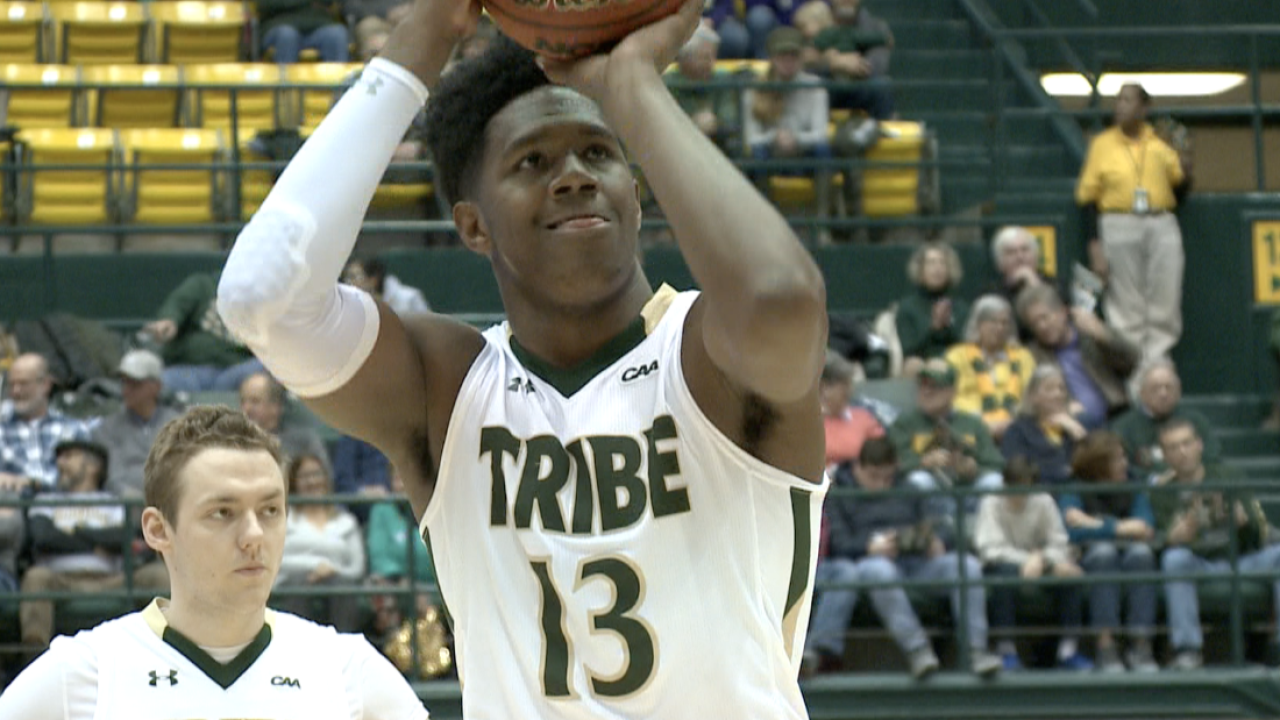 WILLIAMSBURG, Va. (TribeAthletics.com) - Like an uninvited party guest who doesn't seem to care that it's 3 a.m., Drexel kept hanging around Thursday night. It took two huge plays by Nathan Knight, one on each end of the floor, in the final 30 seconds to finally send the Dragons home.

Facing a team it had lost to by 27 points almost four weeks earlier, W&M (17-10, 9-5 Colonial Athletic Association) needed every bit of Knight's night to break a three-game losing streak.

"I knew going into the final stretch, (Drexel) wasn't just going to lay down," said Tribe guard Bryce Barnes, who finished with 18 points and four rebounds. "I was confident Nate was going to pull through in the end. And he did it for us."

For Knight, it's become SOP. In each of W&M's wins over Northeastern this season, Knight made the winning basket in the final two seconds.

The Tribe led from the moment Barnes scored 19 seconds into the game. Five times W&M made a basket to extend its lead to double digits. Five times Drexel (13-13, 6-7) refused to fold.

When Coletrane Washington knocked down a 3-pointer in front of the Dragons' bench and converted the and-one, Drexel had cut the Tribe's lead to 71-70 with 45.8 seconds left. After a timeout, Knight found himself in the left corner being guarded by Drexel's Tim Perry.

As the shot clock reached single digits, Knight drove the baseline, went under the basket, and drew contact from Perry. As he did, Knight used his right to bank a reverse layup high off the glass and in. His free throw made it 74-70 with 21.6 seconds left.

Knight wasn't done. Wynter, a huge problem all night for the Tribe with 24 points, came off a screen and went up for a jumper from the right block. Knight came over and blocked the shot with 7.5 seconds remaining to seal it.

"The thing we did there was change our ball-screen coverage and switch," Fischer said. "Coach (Julian) Boatner had that suggestion, and it was great because Wynter was really in a rhythm.

"(Knight) does so many things that help us. That was a pretty good day at the office for him."

Barnes nearly doubled his scoring average in the first half with 14 points on 6-of-8 shooting. He scored six of the Tribe's first eight points.

"It was huge for Bryce," Knight said. "He's done it day in and day out. He's a tremendous basketball player and an even better teammate. It was great to see him have some success tonight."

"It seemed like every time we pushed the lead out, Drexel would make a run," Fischer said. "I thought a couple of those runs they made were (because of) some mistakes by us. We fouled the 3-point shooter three times tonight. They just kept coming."

Not that the Tribe was surprised.

"They took it to us at their place, so we knew what they were capable of," Knight said. "Wynter, (Zach) Walton, Coletrane, they have tremendous shooters. The biggest thing for us was to stay the course."

Nobody used the term "must win," but the Tribe clearly needed this game. In breaking its longest losing streak of the season, W&M pulled into a tie for third place in the CAA.

"This was definitely important," Barnes said. "Counting this game, we had five games left. You want to take it game by game, but our ultimate goal is to win our conference. We know we need momentum going into the tournament.

"We had a disappointing week last week, so we wanted it to turn it around. We're a really good team, and we know what we're capable of. We came in and got it done today."