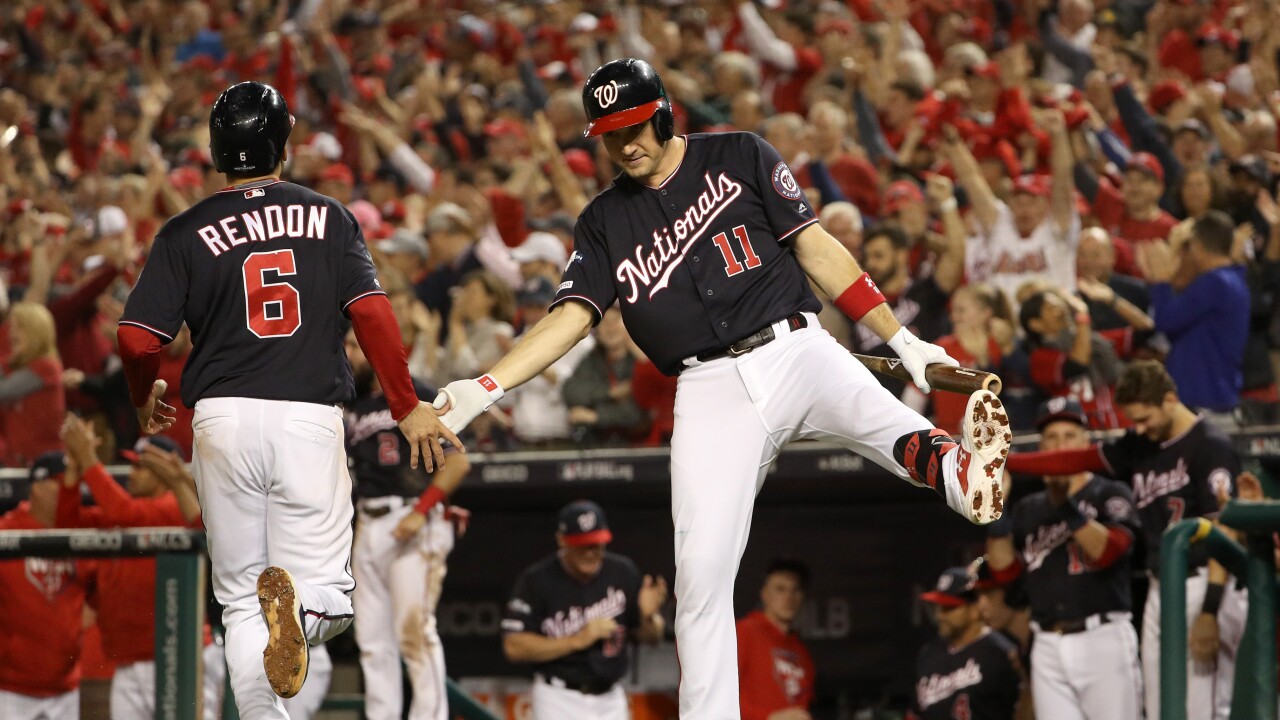 WASHINGTON, DC – OCTOBER 14: Ryan Zimmerman #11 of the Washington Nationals celebrates after Anthony Rendon #6 scored on an RBI double by Howie Kendrick #47 in the fifth inning of game three of the National League Championship Series against the St. Louis Cardinals at Nationals Park on October 14, 2019 in Washington, DC. (Photo by Patrick Smith/Getty Images)

WASHINGTON (AP) - EDITOR’S NOTE: Ryan Zimmerman, a Kellam H.S. product (Virginia Beach) and UVA product, is a two-time All-Star infielder who has played 15 years in the majors - all with the Washington Nationals. He holds most of the team’s career hitting records, and his two homers and seven RBIs last postseason helped the Nationals win their first World Series championship. With baseball on hold because of the coronavirus pandemic, Zimmerman occasionally will offer his thoughts -- as told to AP Sports Writer Howard Fendrich -- in a diary of sorts. In the 10th installment, the 35-year-old Zimmerman discusses what’s on his mind now that there is a plan in place for a 2020 season.

I’m still deciding whether to play.

When it comes down to it, it’s a decision not just for me, but for my family as well.

I have a 3-week-old baby. My mother has multiple sclerosis and is super high-risk; if I end up playing, I can pretty much throw out the idea of seeing her until weeks after the season is over.

There’s a lot of factors that I and others have to consider. I don’t think there’s a right or wrong answer; it’s everybody’s individual choice.

I am by no means someone who thinks we all need to hide in our houses until a vaccine is found. That’s not feasible for anybody. We just need to do things in a sensible, smart way.

I don’t want to be a pessimist about this. I hope that, whatever I decide, the season goes off well, nothing happens, nobody gets seriously sick.

But there are a lot of moving parts and a lot of variables we’re not going to be able to control. That’s what we need to assess.

There’s a lot of talk about rule changes for extra innings and the DH; in my mind, what better year to try some of this stuff out?

With a 60-game season, there’s going to be people who think certain things about this year, anyway. So if you’re thinking about changing things in the game at some point, this is the perfect year to see if people in baseball and fans like it, see if they don’t.

But I’m thinking more about the health and safety perspective -- and the toughest part for us is going to be the travel aspect of it.

That includes for “spring training,” when people are going to be flying in from all across the country and from out of the country, as well. It’ll be interesting to see just how that part of it works out, with so many people going from wherever they are and gathering together all of a sudden.

We haven’t seen a schedule yet, but I’m going to assume 30 games are on the road. I don’t know how long the trips are going to be, but it’s a significant amount of travel and staying in hotels and going places that are outside of where we’ve been allowed to go the last few months.

Once games begin in the NBA and NHL, they’re not going to travel from city to city. Once they’re in their places, they’re there.

And I’ll tell you this about baseball: The owners aren’t going to be traveling with us. I’m pretty sure they’re going to be hanging out at their houses, watching baseball on TV.

We’re going to be the ones out there, if we decide to play. We’re the ones taking all the risk.

If you’re going to participate, there are rules you have to follow. The “bubble” is only as good as the people inside of the “bubble.” It’s not like there’s going to be COVID police on our hotel floors.

So it will come down to the players and everyone involved and what they do with each and every second of their day.

When you start thinking about it like that, it starts becoming a little more complicated.