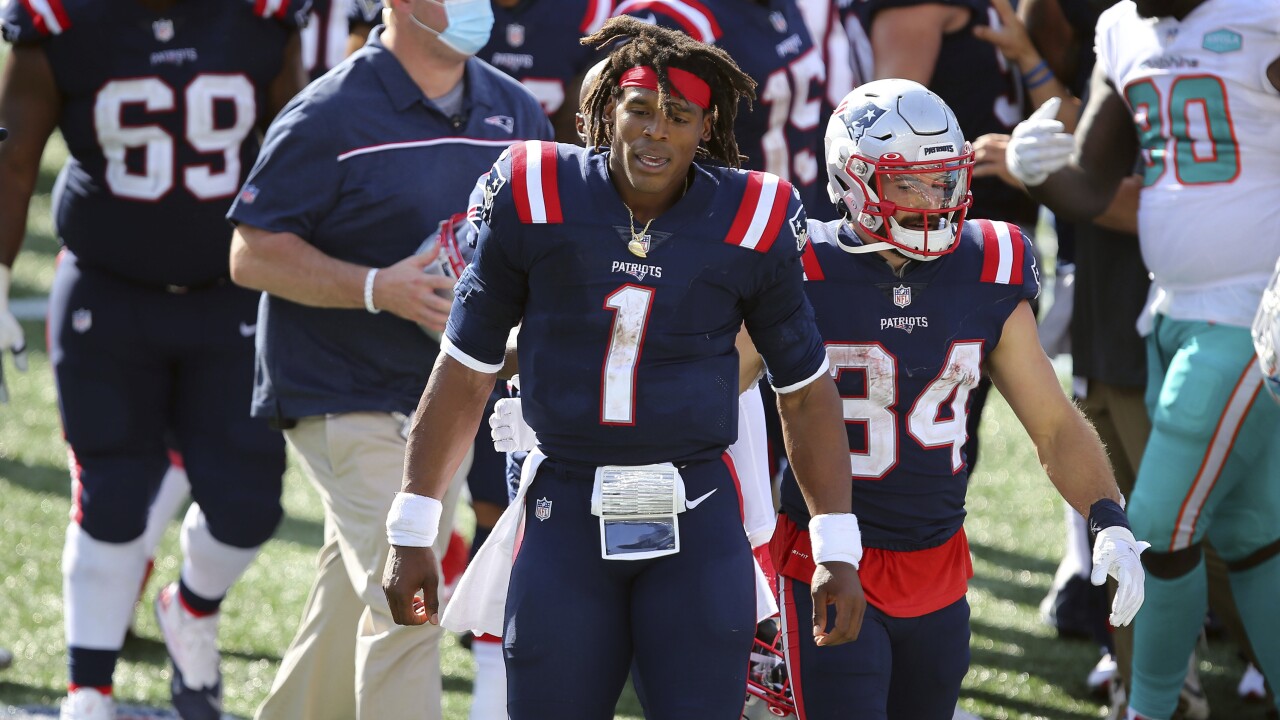 Newton rushed for 15 times for 75 yards and threw for 155 yards, leading a Patriots offensive attack that did most of its damage on the ground in their first game since the departure of Brady to Tampa Bay as a free agent.

Sony Michel added a touchdown for New England, which had 217 of its 357 yards on the ground. Newton was 15 of 19 passing.

Most of the sights and sounds normally associated with Gillette Stadium’s usually raucous crowd were silenced by a Massachusetts COVID-19 ordinance prohibiting fans from attending for at least the first two games of the season.

Aside from the play on the field, the only familiar staples of a normal game day were the presence of Patriots mascot and cheerleaders, though they cheered from a concourse high above New England’s entrance tunnel.

It didn’t seem to bother the Patriots, who had plenty to cheer about.

Miami struggled for most of the game offensively and lost top receiver DeVante Parker, who left in the third quarter with a hamstring injury. Ryan Fitzpatrick was 20 of 30 for 191 yards and three interceptions. Miami was held to 269 total yards.

Newton scored from 11 yards early in the third quarter to put New England up 14-3.

The Patriots were threatening again late in the period, but Jerome Baker kept the Dolphins in the game. He stripped N’Keal Harry inside the 5-yard line, causing a fumble through the end zone for a touchback.

Miami then cut New England’s lead to 14-11 in the fourth quarter on a 1-yard TD run by Jordan Howard and 2-point conversion run by Fitzpatrick with 10:31 left.

The Patriots went quickly on their ensuing series and moved inside Miami’s 40, thanks to a 23-yard run by Julian Edelman and 15-yard penalty on Baker for a late hit. Newton muscled inside the 1 on a fourth-and-1 draw play. Michel went over the top for a TD on the next play.

The Patriots’ defense then shut the door when Fitzpatrick was intercepted in the end zone by J.C. Jackson.

Newton’s arrival was expected to bring more of a running mentality to New England’s offense and it showed early.

Newton carried on the second play of the game and capped an 11-play, 80-yard drive with a 4-yard touchdown run on the Patriots’ third possession to put them up 7-0. The 2015 league MVP was untouched as he crossed into the end zone on the play, spiking the ball and flexing as he was surrounded by teammates.

As promised in a video released by the team on Friday ((https://www.apnews.com/e97bda72c43e4447a1e9c86ce7957c04)), the Dolphins exited the field prior to the pregame playing of “Lift Every Voice and Sing” about a half-hour before kickoff. Miami remained in the locker room during the national anthem, following through on a pledge the team made in its video.

Patriots players and staff, including team owner Robert Kraft, lined up in the end zone and stood together as a video rendition of the song by Alicia Keys played on the Gillette Stadium video board as part of a league-wide nod to the social justice movement taking place across the country. The Patriots stood together on the sideline during the national anthem, many with their hands over their hearts.

For the half the Patriots rushed 19 times, compared to just nine passes. But Newton’s TD was the only score for New England in the opening 30 minutes, which included three punts and a missed field goal. It marked the eighth time since 2015 that the Patriots were held to seven points or less and 150 total yards or less in a first half.

The Dolphins didn’t fare much better. They had a field goal just before halftime, but Fitzpatrick was intercepted twice, including once by reigning Defensive Player of the Year Stephon Gilmore.

Edelman pulled in 6-yard pass early in the second quarter, his 600th career reception. He is now second in franchise history behind only Wes Welker (672).

Patriots: at Seattle on Sunday.