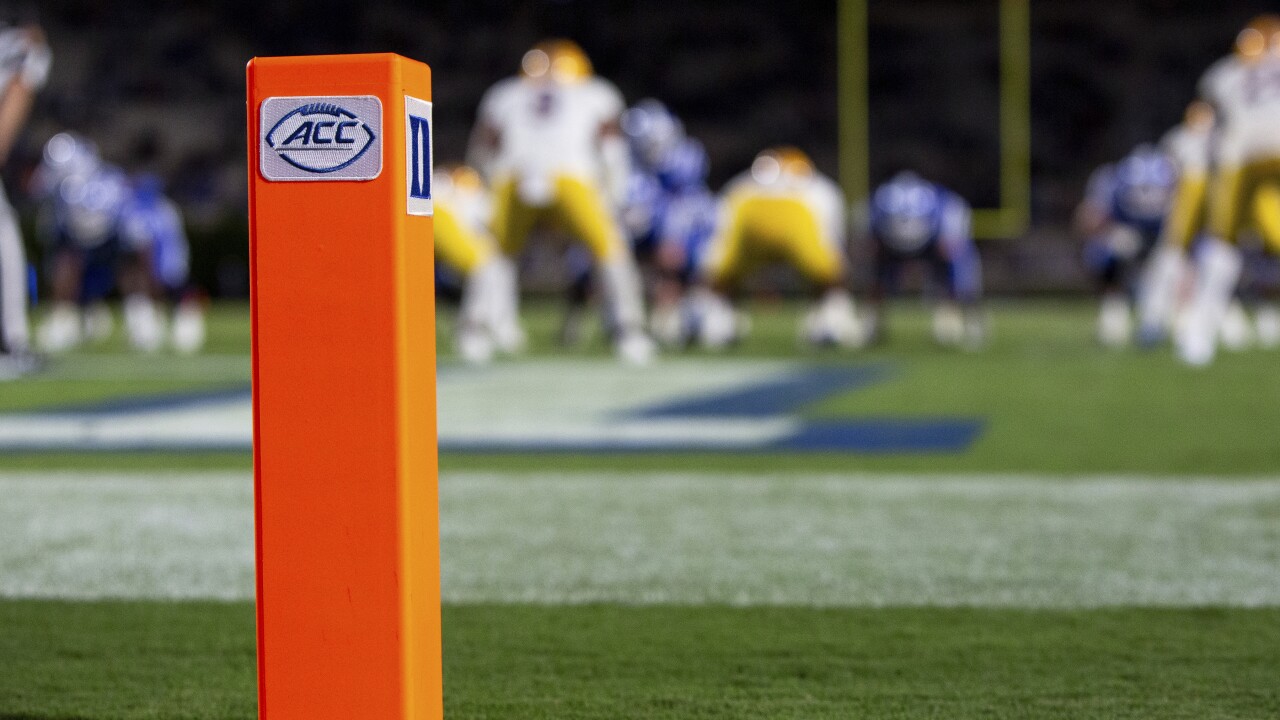 Ben McKeown/AP
The ACC and Duke logos seen on a pylon at the back of and end zone during an NCAA college football game between Duke and Pittsburgh in Durham, N.C., Saturday, Oct. 5, 2019. (AP Photo/Ben McKeown)

SOUTH BEND, Ind. (AP) — The last time quarterbacks Ian Book and Chase Brice shared the same football field, Brice got the last laugh on his way to a championship ring.

When No. 10 Notre Dame entertains Duke in its inaugural Atlantic Coast Conference season opener Saturday, Book and Brice will get most of the attention. The last time they met, on Dec. 29, 2018, in Arlington, Texas, Brice was the backup to freshman sensation Trevor Lawrence and saw late mop-up duty as Clemson dominated the Fighting Irish 30-3 in a College Football Playoff semifinal on its way to the national title.

Book leads coach Brian Kelly’s Fighting Irish after throwing for 3,034 yards, running for 546 and totaling 38 touchdowns during an 11-2 campaign in 2019. Brice, a graduate transfer, will be making his first start for Duke coach David Cutcliffe.

“I’m ready for this weekend and I know we are as a team – we have a great challenge ahead,” said Brice, who threw for 1,023 yards and nine touchdowns and rushed for 187 yards and one TD as Lawrence’s backup. Against the Irish in 2016, Brice went 0 for 2 passing but gained 31 yards on two carries as the Tigers ran out the clock.

“I think we’ve got to be aggressive on both sides of the ball,” Cutcliffe said. “We can’t be afraid. We can’t play on our heels.”

Cutcliffe thought his team did that last November during a visit from Notre Dame. The Irish, in the midst of a season-ending, six-game winning streak, romped 38-7 behind Book’s season-high 139 rushing yards and another 181 yards and four TDs through the air.

Book’s offensive line returns intact, but his weapons have changed. Kyren Williams and Chris Tyree lead the running brigade, while Ben Skowronek, a grad transfer from Northwestern, is expected to be one of the new targets, replacing the departed Chase Claypool and Cole Kmet.

“It’s been fun to work with new players,” Book said. “I feel comfortable with them, which is where I need to be.”

This is the first of 10 ACC games for both teams and the first time ever that Notre Dame will be playing for a conference title in football. The ACC accommodated the Irish with 10 games and a chance to play for the ACC title after the pandemic wrecked Notre Dame’s schedule.

“There are some differences certainly about this opener and the challenges of getting to this point,” Kelly said. “If you win (the ACC) you keep your mission alive for a national championship.”

ONCE UPON A TIME

“When we found out we were playing Notre Dame to open, I think it helped us,” said Cutcliffe, who was to be Charlie Weis’ offensive coordinator at Notre Dame beginning in 2005 but underwent triple-bypass heart surgery and didn’t get the chance.

The Blue Devils believe they will make amends for their dismal performance against the Irish last season.

“I feel like we’re more physical,” said center Will Taylor, who replaces Jack Wohlabaugh (knee). “(New offensive line) Coach (Greg) Frey has prepared us, gotten our minds right, helped build up a new kind of culture and standard that we play to.”

The 4-2-5 defense has solid pass rushers in Victor Dimukeje and Chris Rumph III and an experienced secondary led by Mark Gilbert and Michael Carter.

“What we’re coming out to do Saturday is establish that physicality,” Carter said.

Duke’s secondary should get a boost with the return of cornerback Gilbert, a redshirt senior who has six career interceptions. Gilbert didn’t play last season while still recovering from that injury.

Gilbert’s counterpart at Notre Dame is Shaun Crawford, who suffered season-ending injuries during his freshman, sophomore and senior seasons as a cornerback and played last season with a dislocated left elbow. Crawford begins his sixth season as the starting strong safety.

“I never thought I’d be a starting safety,” said the 5-foot-9, 180-pound Crawford, a team captain. “I’ve just tried to take the physicality, the instincts, the playmaking skills that they have and just put it into my game whenever I am on the field.”