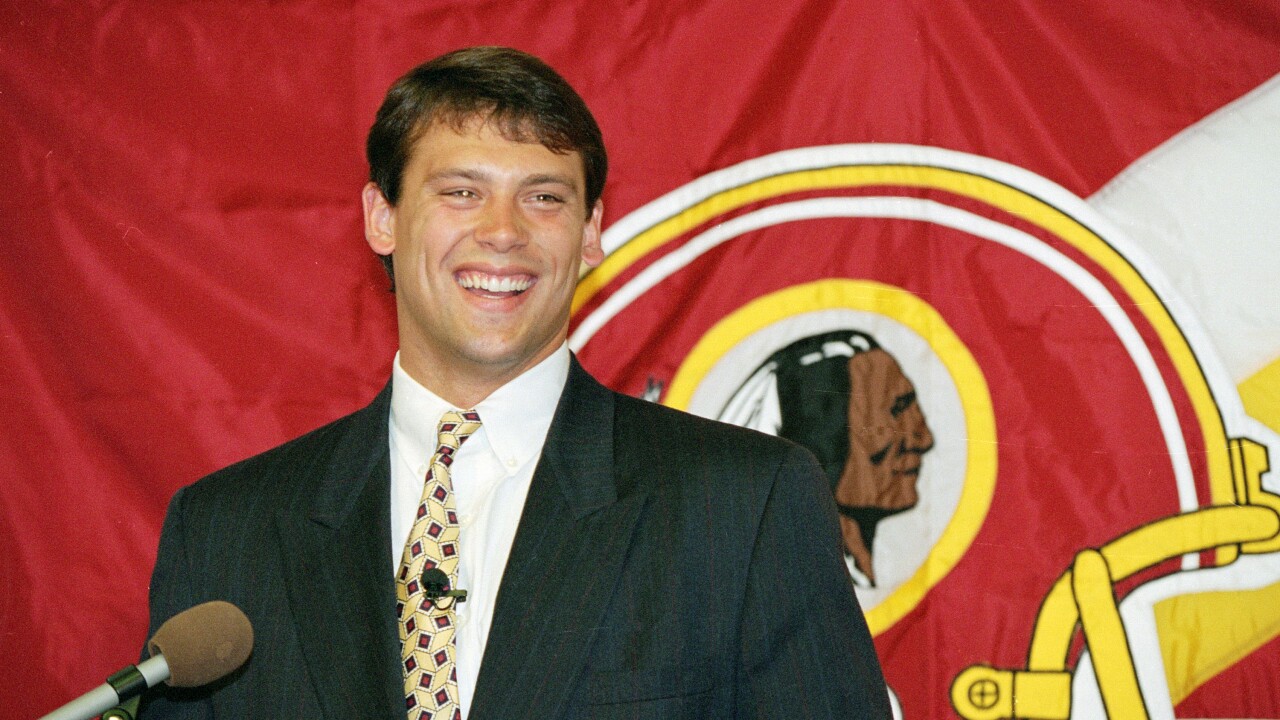 J. Scott Applewhite/AP
Washington Redskins' first-round draft choice quarterback Heath Shuler of Tennessee smiles while meeting with reporters at Redskin Park in Ashburn, Va., April 25, 1994. Shuler was taken with the third pick of the NFL draft by the Redskins, who are rebuilding after a disastrous 4-12 season just two years after winning a Super Bowl. (AP Photo/J. Scott Applewhite)

WASHINGTON (AP) - In advance of the 2020 NFL Draft beginning Thursday, Associated Press writer Stephen Whyno takes us back through Washington Redskins Draft history. Thursday, the 'Skins are slated to select second in the Draft, behind only the Cincinnati Bengals.

BEST FIRST-ROUND DRAFT PICK: Darrell Green. Washington celebrated its first Super Bowl victory by taking a building block for its next two with the final first-round pick in 1983. Selected immediately after Miami got Dan Marino, Green started right away and was a mainstay in the Redskins secondary for almost two decades. He was an All-Pro on the 1991 championship team and was inducted into the Pro Football Hall of Fame in 2008. Sammy Baugh (sixth overall in 1937), Charley Taylor (third in 1964), Art Monk (18th in 1980) and Champ Bailey (seventh in 1999) also became Hall of Famers.

BEST SECOND-ROUND PICK: Paul Krause. The Redskins have one of the NFL’s worst track records in the second round, though Krause intercepted 28 passes in his first four seasons after being the 18th overall pick in 1964. Krause was a two-time All-Pro with Washington but had his best days after being traded to the Minnesota Vikings in 1968. The playmaking safety went into the Hall of Fame in 1998 and still holds the NFL record with 81 career interceptions. Kicker Chip Lohmiller (55th overall in 1988) is a distant second place among Redskins second-rounders.

BEST LATE-ROUND DRAFT PICK: Chris Hanburger. With their 18th-round pick — 245th overall — in 1965, Washington got a 13-year starter at linebacker who’d become a four-time All-Pro. Hanburger started 135 consecutive games from 1968-77, a streak that ended only when he had his appendix removed. Along with Jack Pardee, Hanburger was part of the defense that helped the Redskins reach their first Super Bowl, and he was inducted into the Hall of Fame as a senior candidate in 2011. Guard Russ Grimm (69th overall in 1981) was part of the famed “Hogs” offensive line that paved the way for three Super Bowl titles.

WORST FIRST-ROUND DRAFT PICK: Heath Shuler. The third overall pick in 1994 started only 13 games for the Redskins, completing 47.7% of his passes and throwing for 13 touchdowns and 19 interceptions. Washington lost nine of those games, and it was clear its glory days were over. One more season with New Orleans didn’t go much better for Shuler, who went on to serve in Congress and if not for Ryan Leaf would be in the discussion as the biggest QB bust in NFL draft history. Robert Griffin III takes a lot of heat, but that should be more for what the Redskins gave up to move up to take him second in 2012 and how his injuries were mismanaged.

WORST SECOND-ROUND DRAFT PICK: Malcolm Kelly. Washington’s franchise-long track record for botching second-round picks hit its peak in 2008 with selections of receiver Devin Thomas 34th, tight end Fred Davis 48th and Kelly 51st. Davis had six respectable seasons and Thomas went on to be an effective special teams player elsewhere, but Kelly’s career was derailed by injuries after just 28 catches in 21 games. Each era has included plenty of bad second-round picks, from Jim Staton and Ed Salem in 1951 to Su’a Cravens in 2016.

BEST DRAFT TRADE: The Ricky Williams trade. The Redskins got eight picks, including two first-rounders, from New Orleans for moving down from No. 5 to No. 12 in 1999. Thanks to the Saints’ desperation for Williams, Washington had the capital to move back up to take Bailey seventh overall and selected linebacker LaVar Arrington with the second overall pick in 2000.

WORST DRAFT TRADE: The RGIII trade. To get Griffin at No. 2 in 2012, Washington traded the No. 6 pick and its second-rounder that year plus first-rounders in 2013 and 2014 to the Rams. Griffin’s magical rookie season led to a playoff berth, but the depth depleted by the trade hurts the Redskins to this day. Not to mention, Ryan Tannehill went eighth, Russell Wilson 75th and Nick Foles 88th in the quarterback-heavy draft, but at least the Redskins got Kirk Cousins 102nd with one of the picks they didn’t deal away.

DID YOU KNOW THEY ONCE DRAFTED?: Keenan McCardell. The receiver out of UNLV would’ve been a steal with a 12th-round pick, 326th overall, in 1991 if the Redskins didn’t cut him after one season on injured reserve. McCardell went on to play parts of 16 NFL seasons with his best time in Jacksonville and actually finished his career with Washington in 2007.