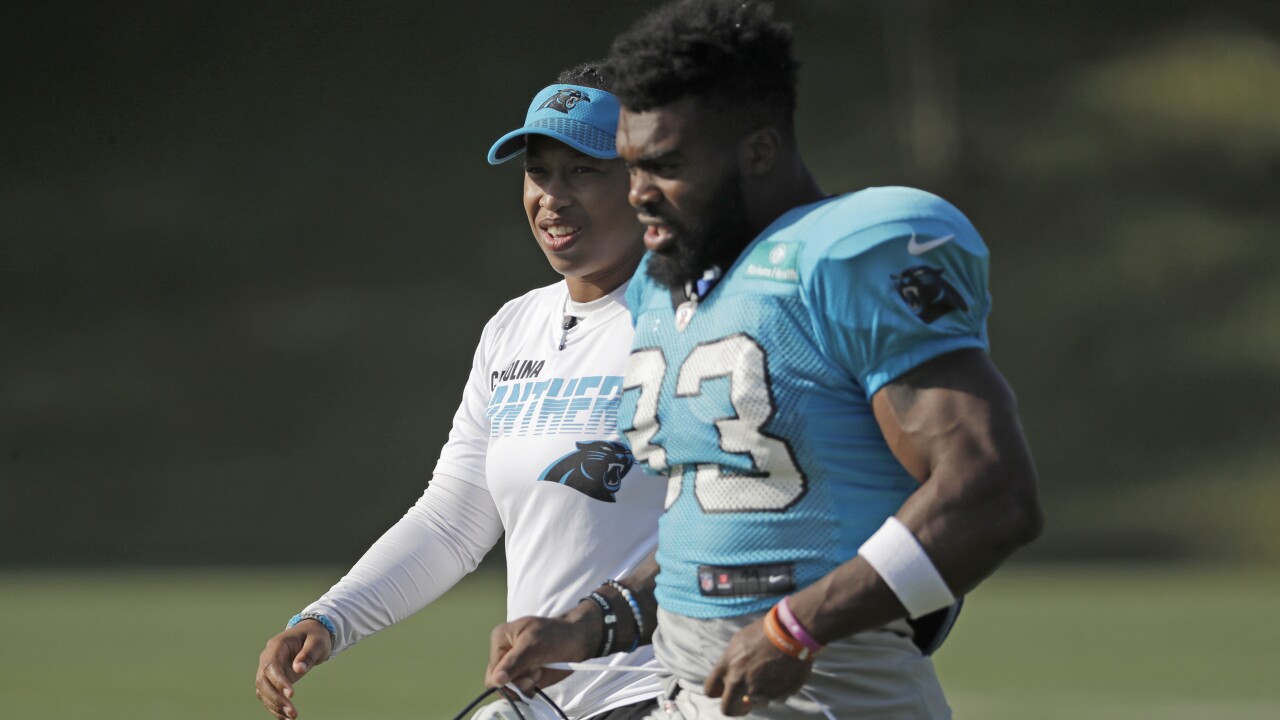 LOUDOUN COUNTY, Va. (Redskins Public Relations) – The Washington Redskins announced today that they have named Jennifer King a full-year coaching intern. In her role, King will work with the offensive staff throughout the course of the offseason, training camp and regular season and will specifically assist Randy Jordan with the running backs.

King comes to the Redskins having coached in the National Football League, the Alliance of American Football and in the college ranks. As first reported by Rhiannon Walker, King is the first full-time African American female assistant coach in NFL history.

“Jennifer is a bright young coach and will be a great addition to our staff,” said Head Coach Ron Rivera. “Her familiarity with my expectations as a coach and my firsthand knowledge of her work ethic and preparation were big factors in bringing her to the Redskins.”

King was most recently an offensive assistant with Dartmouth College. She primarily worked with the wide receivers and created defensive scouting reports and secondary specific scouting reports for the wide receivers. Dartmouth finished the 2019 season 9-1 and captured the Ivy League Championship. The team averaged 33.3 points per game and averaged 382.4 yards per game.

King interned for the Carolina Panthers during the offseason in 2018 and 2019. In 2018, she was an intern wide receivers coach and assisted Lance Taylor with on-field development drills and in position meetings. She assisted with the creation of scouting scheme cards for the opposing defense and charted practice and in-game player participation and defensive schemes. In 2019, she returned to the Panthers in the role of intern running backs coach and worked with the running backs in organized team activities, mandatory mini camp and training camp. She worked one-on-one with rookies on playbook proficiencies and individual skill development along with analyzing drill efficiency and drill concepts. She worked with the Panthers running backs, including Pro Bowl running back Christian McCaffrey.

In between her two internships with the Panthers, King was an assistant wide receiver coach and special teams assistant for the Arizona Hotshots of the Alliance of American Football. The Hotshots were 5-3 and tied for first place in the AAF Western Conference before the league disbanded. At the time of the league being dissolved, the Hotshots ranked No. 2 in yards per game (343.9) and points per game (23.2).

King has participated in NFL coaching clinics from 2015-18 and also took part in the NFL Women’s Career in Football Forum in January of 2018. The forum was a highly selective two-day event which connected qualified female candidates for positions in football as coaches, officials, scouts and athletic trainers.

King also has experience coaching women’s basketball. She was the Head Coach of Johnson & Wales University Charlotte from 2016-18. During King’s tenure the team had an 37-10 record and they captured the USCAA Division II National Championship in 2018. She was named the USCAA Division II National Coach of the Year in 2018. King also was an assistant coach on the Greensboro College women’s basketball staff from 2006-16. During King’s 10 years with the team, they went 136-54, won five conference titles and appeared in the NCAA tournament five times.