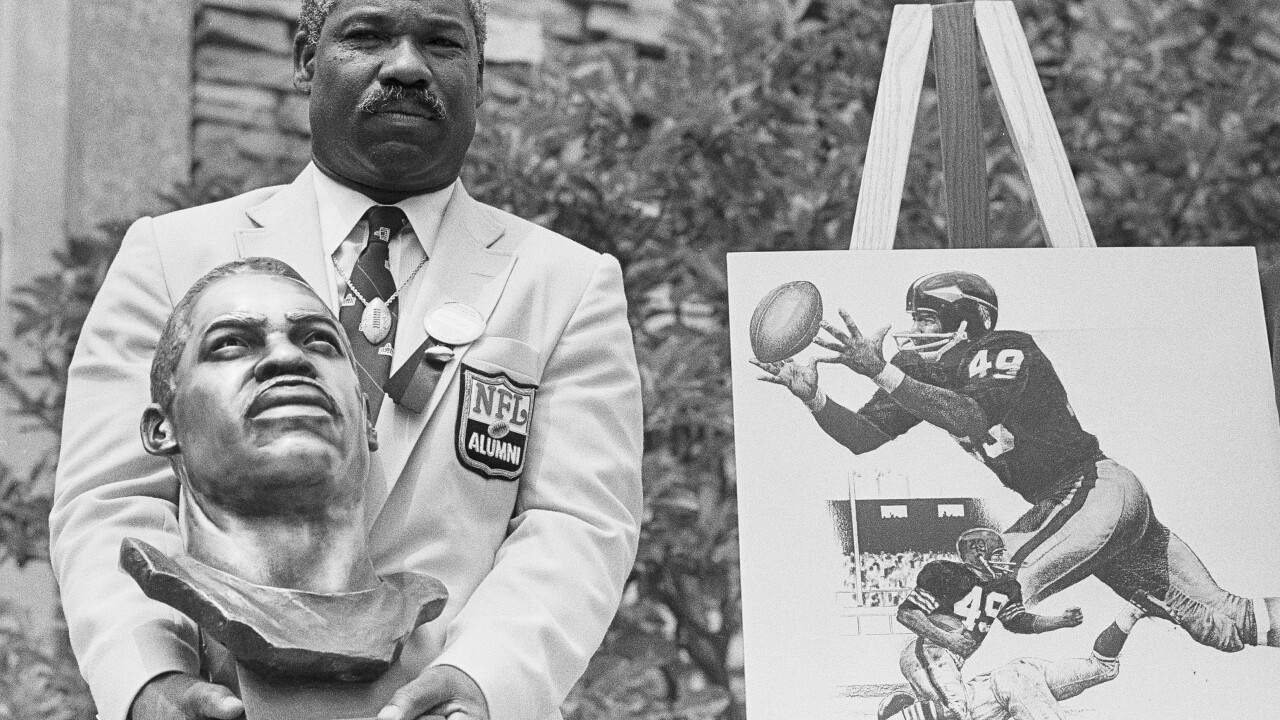 Gus Chan/AP
FILE - In this July 30, 1983, file photo, former Cleveland Browns and Washington Redskins halfback and wide receiver Bobby Mitchell poses with his bronze bust after being inducted into the Pro Football Hall of Fame in ceremonies in Canton, Ohio. Mitchell, the speedy late 1950s and ’60s NFL offensive star the Browns and the Redskins, has died. He was 84. The Pro Football Hall of Fame said Sunday night, April 5, 2020, that Mitchell’s family said he died in the afternoon. (AP Photo/Gus Chan, File)

The Washington Redskins will retire the jersey of Hall of Famer Bobby Mitchell. They will also rename the lower level of FedEx Field for him, replacing the section named for former owner George Preston Marshall.

The team, which is under pressure to change its name during the ongoing national reckoning over racism, said Saturday that Mitchell’s No. 49 will become only the second jersey in the franchise’s 88-year history to be retired. The other is the No. 33 of Hall of Famer Sammy Baugh.

Mitchell, Washington’s first African American player, died in April. The Redskins were the last NFL team to integrate the roster.

Significantly, dropping Marshall’s name from the lower bowl of the stadium follows by one day the removal of his statue at RFK Stadium, the team’s former home.

Marshall moved the team from Boston to Washington and resisted integrating the roster with Black players until “forced to do so” in 1962.

The team’s announcement of the change did not mention Marshall, who was inducted into the Hall of Fame in 1963 and died in 1969.

Events DC officials who oversee RFK Stadium in Washington — FedEx Field is in Landover, Maryland — called the removal a “small and overdue step on the road to lasting equality and justice.”

Calls for the team to change its nickname have ramped up, too, and the Washington Post’s editorial board on Friday called on Redskins owner Daniel Snyder to do so.

Mitchell, who played running back and receiver, not only was one of Washington’s greatest players, but a trailblazer.

“Bobby was our Jackie Robinson,” said Brig Owens, an outstanding safety for the team. “He had to handle the pressure of being the first African American football player to integrate the Washington Redskins. He, like Jackie, was a military officer headquartered in the D.C. area when he received notice of his trade (from Cleveland).

“In the face of great adversity, he served as a role model for the Washington, D.C. community, the Redskins, its fan base and the NFL. He was committed to the National Leukemia Society and the Shaw Food Committee where for 40 years they fed over 500 families at Thanksgiving. He was more than an exceptional football player and athlete, he was an exceptional human being. He was like a brother to me.”

After four seasons with the Browns, Mitchell spent seven years in Washington . He was an All-Pro in 1962, his first season in Washington and also his first at wideout. Mitchell even led the NFL in yards receiving that season and again in 1963.

He also worked in the team’s front office, spending 41 years with the franchise.

Mitchell once said he recognized he was alone as a Black football player in Washington.

“Bobby was an individual that was thrown into the arena of being a victim for no reason,” said NFL great Jim Brown, a former teammate. “He had to suffer for being Black more than any person I know that played football at the time I played. With that kind of ability, if he were white, everybody on this earth would know who he was.”