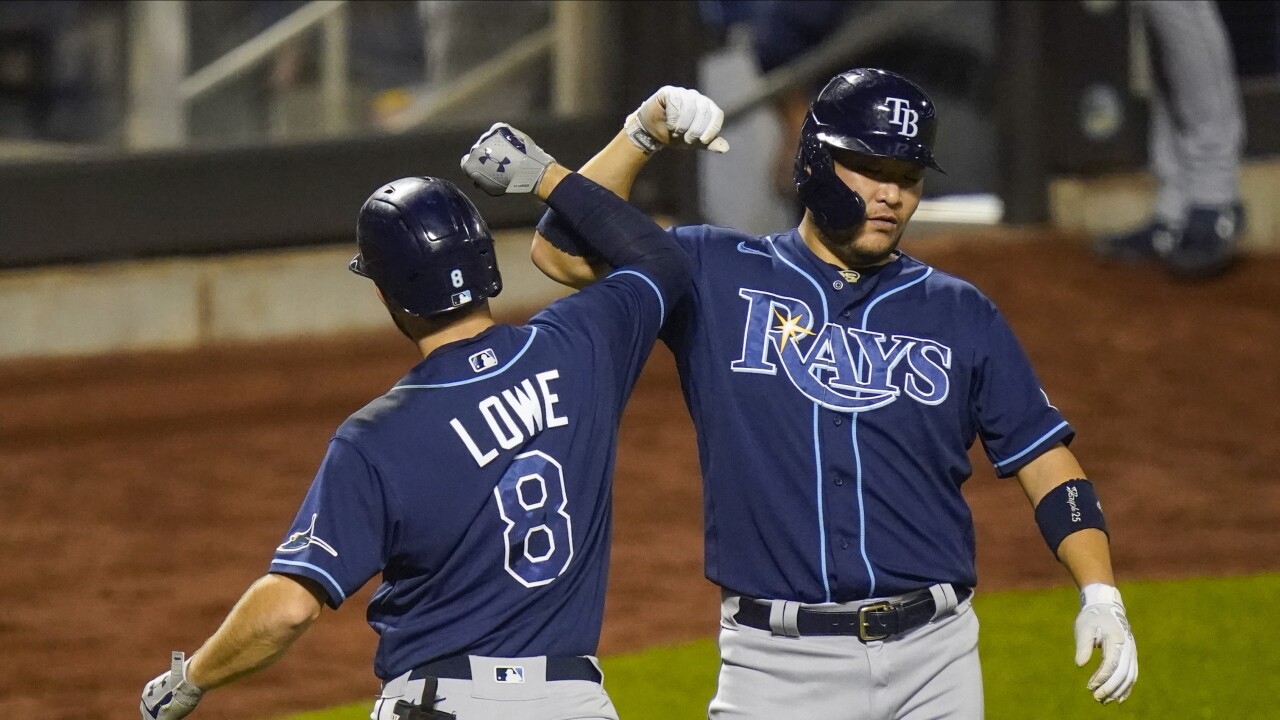 Joey Wendle and Brandon Lowe also went deep for the Rays to back Tyler Glasnow’s six solid innings. Tampa Bay will be home at quirky Tropicana Field for a best-of-three first-round playoff series beginning next Tuesday.

After missing a chance to clinch Tuesday, the Rays went into Wednesday again needing just a win or a New York Yankees loss against Toronto to lock up the division championship.

The Rays (37-20) broke a 2-all tie in the sixth on Arozarena’s two-run homer off Michael Wacha and pulled away, taking care of business themselves.

As has become customary during this pandemic-shortened season, the celebration was muted. After Nick Anderson fanned Andres Gimenez for the final out, the closer exchanged a hug with catcher Mike Zunino. The Rays filed out of the dugout and someone shot off a canister filled with confetti that eventually fluttered down onto the grass and dirt at Citi Field.

With one out in the sixth, Nansemond River High School alumnus Brandon Lowe singled off Wacha (1-4). Arozarena homered to center field on the next pitch.

Lowe, who had an RBI fielder’s choice in the third, hit a two-run homer in the eighth. Willy Adames added an RBI single later in the inning and Arozarena homered again in the ninth.

Wendle homered in the second.

The insurance came in handy for the Rays when the Mets scored three times off Oliver Drake in the ninth — via an RBI groundout by Robinson Cano and a two-run homer by Todd Frazier before Anderson closed the door.

Glasnow (5-1) allowed two runs on three hits and one walk with eight strikeouts.

Gimenez and Dominic Smith homered off Glasnow in the final home game of the season for the Mets, whose long-shot playoff hopes were further damaged with the loss. New York began the day 2 1/2 games out of an NL wild-card spot.

Rays pitcher Charlie Morton sported a T-shirt picturing a stable of horses as he spoke with reporters during a pregame Zoom call. Morton did little to discourage the notion the shirt was inspired by manager Kevin Cash’s viral rant earlier this month, when he declared the Rays have “a whole damn stable full of guys that throw 98 mph” after Yankees closer Aroldis Chapman threw near Mike Brousseau’s head in the ninth inning Sept. 4.

“The stable shirt?” Morton said. “It was in my locker last week and I like horses.”

With a grin obviously growing even behind his Rays mask, Morton said he rode horses as a kid.

“So I was ecstatic to see this shirt in my locker and I wore it,” he said.

As for the fireballers on the Rays’ pitching staff?

“We’ve got some guys that throw really hard,” Morton said.

Rays: LHP Jose Alvarado (shoulder, lat) is scheduled to throw batting practice to 3B Yandy Diaz (hamstring) and 1B Ji-Man Choi (hamstring) at Tropicana Field on Thursday. Cash said all three players are progressing and he hopes they are available for the playoffs. … Brousseau (oblique) missed a fourth consecutive game. Cash said he would have been available off the bench if needed

Mets: RF Michael Conforto (hamstring) returned to the lineup as the designated hitter after missing two games and went 0 for 4. … The Mets activated RHP Dellin Betances (lat), who last pitched Aug. 29, and optioned RHP Corey Oswalt to the alternate site.

Rays: After a day off Thursday, RHP Charlie Morton (2-2, 4.64 ERA) is scheduled to get his postseason tuneup in the opener of a series against the Phillies on Friday.