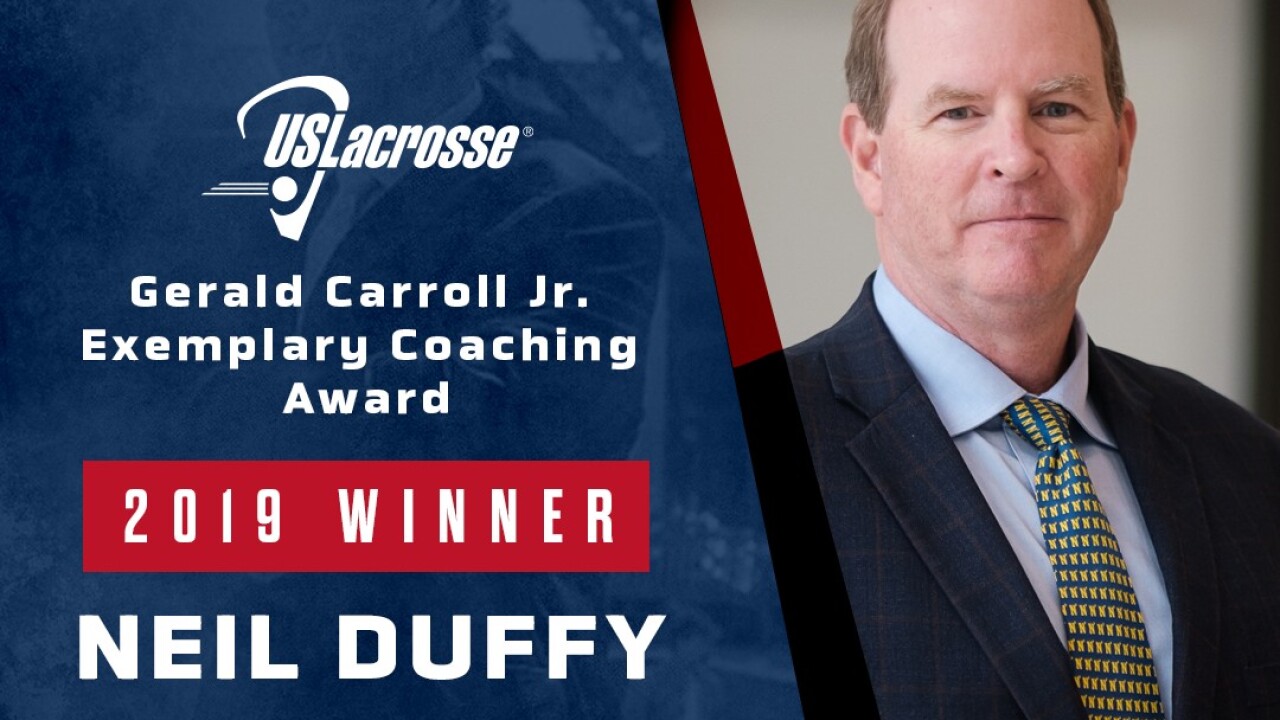 SPARKS, Md. (US Lacrosse Communications) — US Lacrosse has named Neil Duffy of Virginia Beach, Virginia as recipient of the organization’s 2019 Gerald J. Carroll, Jr. Exemplary Coaching Award. Duffy has served as a coach and teacher at Norfolk Academy since 1994, including service as the boys’ varsity lacrosse assistant coach and boys’ JV lacrosse head coach.

Established in 1994, the Gerald J. Carroll Award annually recognizes one high school boys' coach nationwide. The award measures the success of a coach not in victories but in the care and guidance he gives to the balanced development of the young men who play the game.

In addition to numerous coaching and teaching honors that he has received during his tenure, Duffy has helped to develop numerous athletes that have progressed into successful collegiate and professional lacrosse careers.

Among the letters of support submitted on Duffy’s behalf, Dennis Manning, headmaster of Norfolk Academy, wrote, “Neil is in the pantheon of great teachers in a three centuries-long tradition at Norfolk Academy -- he will go down in our school's annals as one of the greatest teachers, coaches, and role models our school has known. He is among the most selfless, caring, supportive, involved, tirelessly dedicated and engaged mentors, teachers, and coaches I have known in my career. Neil's students and players revere him.”

In addition to lacrosse, Duffy has also coached girls’ varsity basketball, middle school football, and middle school boys’ basketball at Norfolk Academy. He is a prior winner of the school’s Excellence in Coaching Award, and he has also served as vice president of the US Lacrosse Tidewater Chapter since 2012.

Originally from Massapequa, New York, Duffy is a 1984 graduate of the U.S. Naval Academy and served as co-captain of the Mids’ men’s lacrosse team. Duffy has a personal connection with Gerry Carroll, who served as an assistant coach at Navy during that time.

“It is a great honor to present the Carroll Award to Neil Duffy,” said Brian Carroll, one of Gerald’s son and a member of the award’s selection committee. “Coach Duffy has spent the better part of three decades working with and developing young men and women on and off the lacrosse field. As a graduate and lacrosse player at the U.S. Naval Academy, who was coached and taught by our dad, being able to present Coach Duffy with this award truly brings its meaning full circle.”

US Lacrosse, a 501(c)(3) nonprofit corporation, is the national governing body of lacrosse and the home of the nation’s fastest-growing team sport. US Lacrosse, which coordinates all activities of the U.S. National Teams Program, has nearly 450,000 members across the country. Through responsive and effective leadership, US Lacrosse provides programs and services to inspire participation while protecting the integrity of the sport.