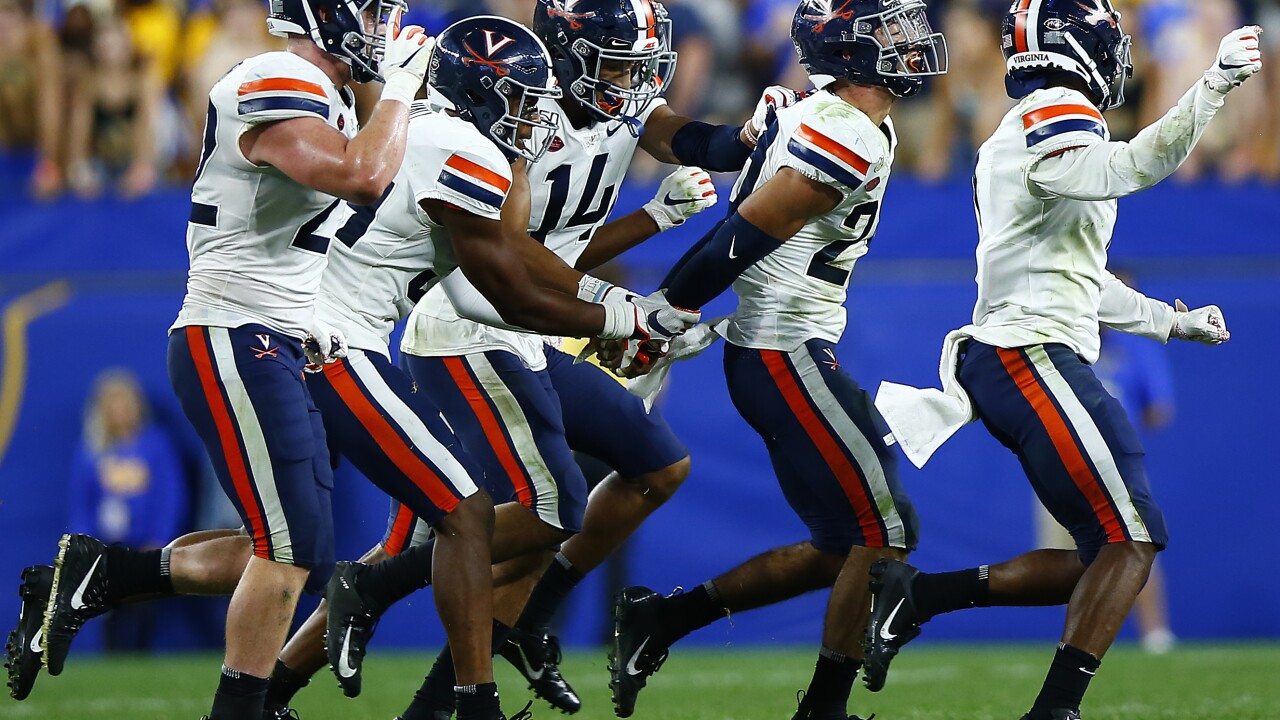 Jared Wickerham/AP
Brenton Nelson #28 of the Virginia Cavaliers celebrates with his teammates following an interception against the Pittsburgh Panthers during an NCAA football game on Saturday, Aug. 31, 2019 in Pittsburgh. (AP Photo/Jared Wickerham)

An unexpected week off gave Virginia’s players a break a little sooner than expected.

Now they begin a five-week stretch with games every week beginning with Louisville on Saturday.

The Cavaliers (2-4, 2-4 Atlantic Coast Conference) and Cardinals (2-5, 1-5) matchup had to be postponed a week after a COVID-19 outbreak within the Louisville program.

“I think it was helpful from, if nothing else, just from a routine break or freshness and then return to play for the final stretch,” Virginia coach Bronco Mendenhall said. “As few days as it was, it still helped.”

The Cardinals played without a number of starters in their loss to Virginia Tech two weeks ago, then paused all activities on Nov. 4. They returned to work Sunday, but will still be missing several key players due to ACC coronavirus protocols.

“We were excited about being able to get back out on the field yesterday, last night, and we waited really until we got all the results back before we even met with our guys,” coach Scott Satterfield said earlier this week. “... It is kind of unique situation.”

The one-week delay did make preparation easier, he said.

“Obviously, we game planned all last week for Virginia and then of course we hit pause and now you’re right back on and again this week that having most of all the work pretty much done. You’re kind of just refining the game plan and kind of moving forward with everything, so we’re back on schedule.”

In a series that routinely produces close games, those refinements could be key.

Some other things to watch when Louisville visits Virginia:

Malik Cunningham has been very effective, and ineffective, sometimes in the same game. He threw for 350 yards and three touchdowns in a 42-35 loss to Virginia Tech two weeks ago, but also threw three interceptions. He has 15 TDs passes and eight interceptions and will be operating against a Cavaliers secondary missing several key players.

Virginia has been effective mixing transfer Keytaon Thompson into the quarterback rotation with starter Brennan Armstrong, in part because Thompson also plays wide receiver for the Cavaliers. Thompson hasn’t completed either of his two pass attempts, but has run 25 times for 138 yards and a TD. The shuttle could be especially challenging for a defense that figures to use several reserves because of COVID-19-related absences.

The Cavaliers are last in the conference, allowing 312 passing yards per game, and have been susceptible to the long ball. They’ve allowed six TD passes of more than 20 yards. Cunningham connected on a 77-yard scoring pass to Tutu Atwell in Louisville’s 28-21 victory last season. The QB also got loose for a 25-yard TD run.

Virginia linebacker Charles Snowden has come on strong after a slow start to the season. He’s had 18 tackles, including 7 1/2 for losses, and five sacks in his last two games. He had four of those sacks in Virginia’s 44-41 victory against North Carolina two weeks ago.

The Cardinals were trailing Virginia Tech 21-0 two weeks ago before rallying, and Virginia has been outscored 65-23 in the first quarter, making that an emphasis for both teams.

“Once you get behind like we did, like we have a couple of games this year, now you’re just looking to try to force it and get the ball down the field and try to score quickly and try to get back in the game,” Satterfield said. “If we can get some stuff going early I think it helps our psyche, it obviously helps momentum, I think our kids play a lot better that way and it really, really changes the course of the game.”