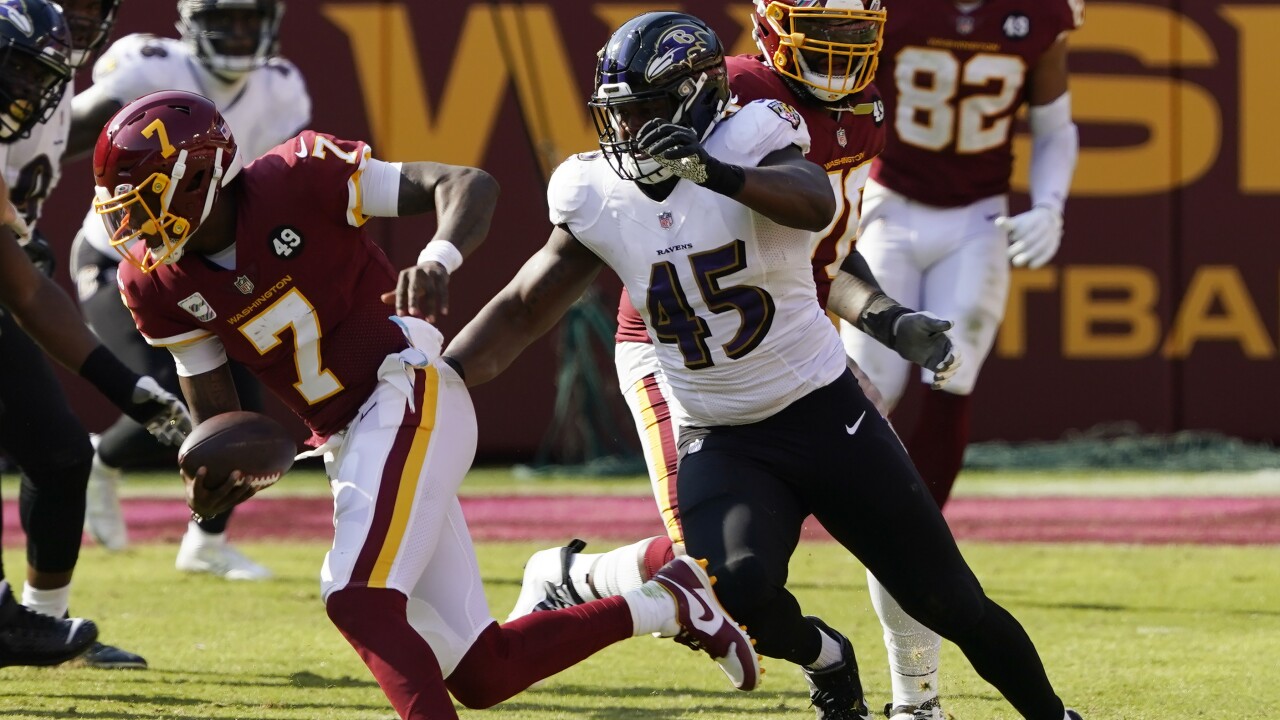 LANDOVER, Md. (AP) - Lamar Jackson ran for a 50-yard touchdown and threw for two scores in a bounce-back performance by the reigning NFL MVP and the Baltimore Ravens, who took control early against Washington in a 31-17 victory Sunday.

Coming off a humbling loss to Kansas City on Monday night, the Ravens (3-1) built a 21-10 halftime lead before opening the third quarter with a drive that ended with Mark Andrews’ second touchdown catch.

That was enough to hand Washington (1-3) its third straight defeat.

The game was tough to watch for Washington coach Ron Rivera, and not just because of the score. Weakened by treatment he received during the week for lymph node cancer, Rivera occasionally took a break by sitting on the bench.

Jackson’s numbers weren’t as big, but he managed the Baltimore offense as required while completing 14 of 21 passes for 193 yards.

Limited to 97 yards passing against the Chiefs, Jackson surpassed that total by halftime. He was backed by a strong defense looking for redemption after allowing Kansas City to amass 517 yards in a 34-20 victory.

The Ravens went up 7-0 when Mark Ingram scored from the 1 after cornerback Marlon Humphrey ripped the ball out of the grasp of J.D. McKissic and Marcus Peters recovered at the Washington 34.

Early in the second quarter, a 54-yard field goal try by Washington’s Dustin Hopkins clanged off the left upright. On third-and-4 from midfield, Jackson faked a handoff and took off down the middle of the field for a 50-yard score, shrugging off an attempted tackle by Kendall Fuller along the way. It was the longest run of his career, topping the 47-yarder last year against Cincinnati.

Washington closed to 14-7 with a 75-yard drive, capped by a 2-yard run by Antonio Gibson.

Facing a 4th-and-9 at the Washington 43, the Ravens pulled off a fake punt. Sam Koch threw a 15-yard completion to Mike Boykin, and Jackson cashed in with an on-the-run, 25-yard TD pass to Andrews just after the two-minute warning.

Late in the half, however, Jackson’s run of 159 straight passes without an interception ended when he was picked by Fuller. Washington cashed in with a field goal to make it 21-10.

Limited to three catches for 22 yards by Kansas City, Andrews hauled in a 22-yard touchdown pass to increase the lead to 18.

Three days after signing a five-year contract extension in the vicinity of $98 million, Humphrey began offering return on Baltimore’s investment with his second forced fumble of the season and fifth of his career to set up the Ravens’ first score.

It was the 17th straight game in which Baltimore forced at least one turnover, the longest current streak in the NFL.

Washington: Greg Stroman left in the first quarter with a right leg injury after being hit by two tacklers during an ill-advised punt return. ... DL Chase Young (groin) was inactive.

Ravens: host Cincinnati next Sunday in an AFC North matchup.