Washington's Haskins shows signs of growth as a leader 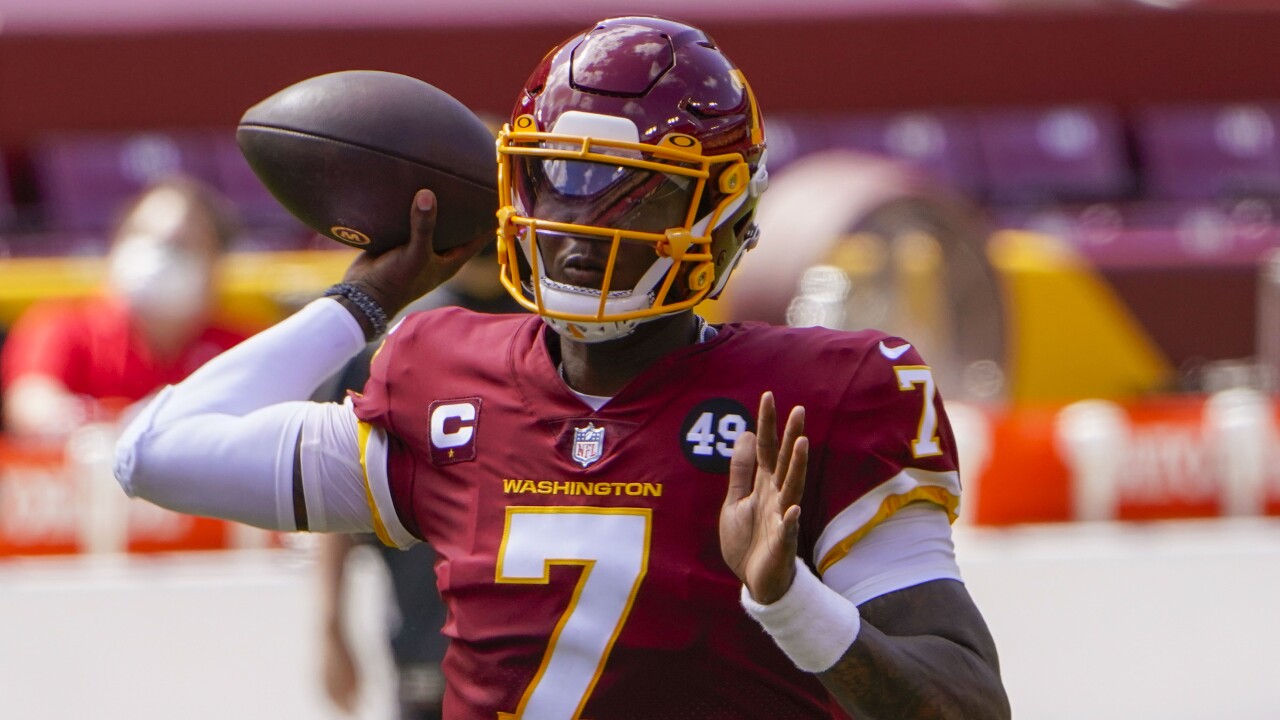 ASHBURN, Va. (AP) — During halftime of Washington’s season opener against Philadelphia, coach Ron Rivera stepped away to receive fluids through an IV as a planned treatment for his recently diagnosed skin cancer.

Rivera told one of his assistants to make sure somebody “steps up to the podium” if he didn’t return to the locker room in time.

The man who spoke turned out to be quarterback and newly minted captain Dwayne Haskins, whose motivation in the locker room and command in the second half played a vital role in a come-from-behind 27-17 victory.

“Dwayne stepped up and it was a pretty raucous (speech), from what I understand,” Rivera said.

After Haskins completed an uneven rookie year for a last-place team and an interim head coach in 2019, coaches and players can point to the strides he’s made as a leader as they hope he evolves into their franchise quarterback.

Haskins said he reminded his teammates of Week 1 of 2019, which also came against the Eagles.

The roles were flipped: It was Washington that grabbed an early 17-0 lead and the Eagles who stormed back to win.

Haskins told the group that they shouldn’t feel like “a little bro” to their NFC East rivals.

“I just grabbed the team up and got everybody going and (said), ‘This is what we’re going to do, and I’m going to lead you for the rest of the game,’” Haskins said Wednesday.

“I felt like it was on my shoulders to let these guys know that they have something to believe in and we’re going to make these plays in order for us to win, and we did. It felt great to know those guys went out there and went to war for me.”

One of the goals Haskins set for himself before the season was to be named a captain. It aligned with expectations Rivera and the front office had for him in his second season — not only to secure the No. 1 quarterback job over Kyle Allen and Alex Smith but to take charge of the team and be a more effective leader.

According to wide receiver Steven Sims Jr., also a second-year pro, Haskins’ halftime talk was emblematic of how he has been developing behind the scenes.

“It was big, but that was what we were seeing in Dwayne at the end of last season (and) all offseason,” Sims said.

“So that was expected of him to come speak. He was speaking at pretty much the beginning of every drive. He came in the huddle and gave us a quick little speech, like ‘Hey, this is what we’re about to do.’ Boom, we’d go out there and do it.”

Rivera sees how Haskins takes his responsibility seriously any time something goes awry during a drill in practice. Haskins tries to address what went wrong whenever there’s a missed pass, whether it means owning up to a bad throw or correcting a receiver’s route-running.

Rivera and offensive coordinator Scott Turner praised Haskins’ confidence, mobility and decision-making against the Eagles, while acknowledging he didn’t make every throw he could have.

Haskins finished 17 of 31 for 178 yards and one touchdown pass, a 6-yarder to tight end Logan Thomas just before halftime. He led four scoring drives in the second half while the defense tormented Carson Wentz and held Philadelphia scoreless.

No one in Washington was too pleased with their overall performance Sunday, given the slow start. The team is looking for more consistent rhythm on offense going into Week 2 at the Arizona Cardinals. But the players’ resilience against the Eagles, led by Haskins, gave them reason for hope.

“I definitely feel like halftime mattered,” Haskins said. “A couple guys just came up to me and said, ‘I know what you can do on the field. For you to step up and bring those guys together and have that conversation for us, and for it to resonate with a lot of players, just meant more as far as captainship or leadership or being a quarterback of this football team.’”