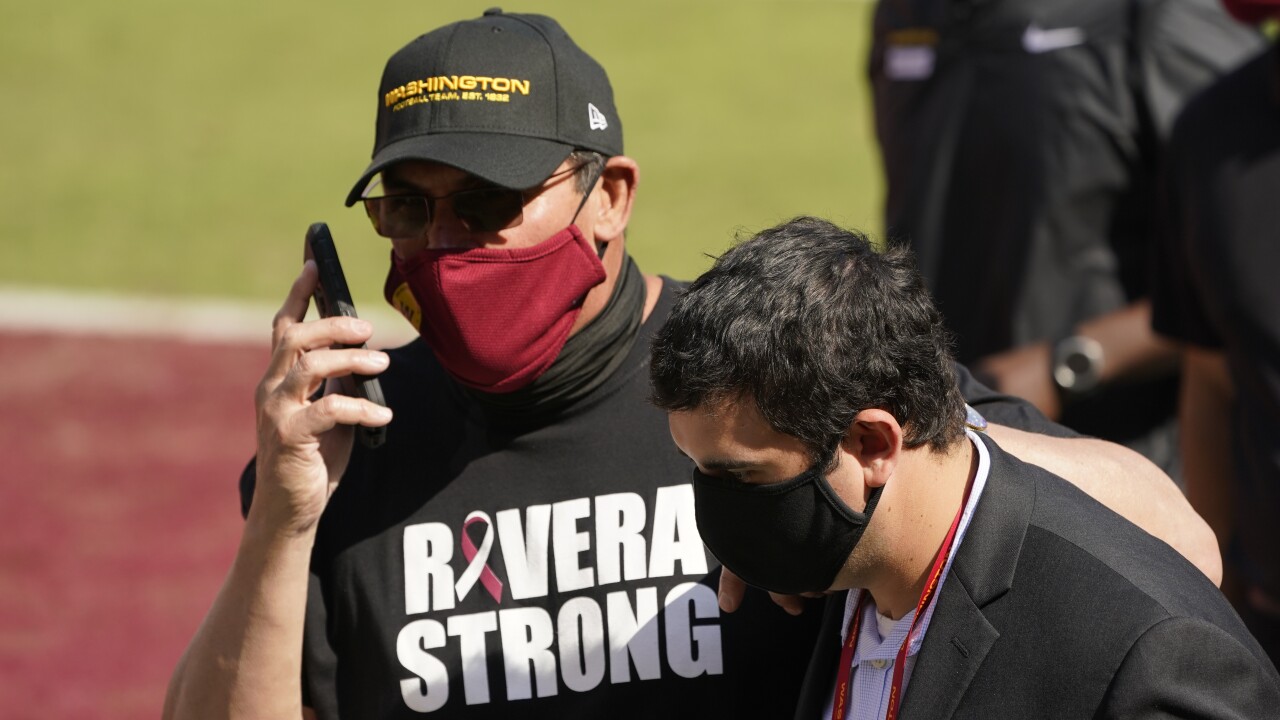 LANDOVER, Md. (AP) — Ron Rivera has found that his battle with cancer has something in common with the Washington Football Team he coaches.

To be sure, some days are better than others.

Rivera had plenty of ups and downs Sunday, and his team fared similarly in a 31-17 loss to the Baltimore Ravens.

Watching from the sideline took its toll on the coach, who felt alternately strong and a bit weary while trying to guide Washington against one of the best teams in the NFL.

“It’s interesting because I had my moments when I felt pretty strong and felt good enough to walk up and down the sidelines,” Rivera said. “There were other times where I waned a little bit, so I had to take a quick break and get some Gatorade in me. I was able to get back up and keep going.”

It’s been a struggle for Washington thus far this season, with three losses following a win over Philadelphia in the opener. Rivera has managed to stay upbeat through the defeats — and while receiving cancer treatment.

“Coach Rivera is very strong, and he is a genuine person,” wide receiver Isaiah Wright said. “He gives us a purpose. We all come from different places and we have different things going on, and to see coach going through what he’s going through and persevere and continue to do his job is only motivating.”

The 58-year-old Rivera is striving to beat cancer and make Washington a better team in his first year as its coach. Sometimes, it’s tough to do both at the same time because the disease and the treatment take so much out of him.

“I took two bags of IV fluid prior to the game,” he said. “I would sit down during TV timeouts — I normally don’t but I would, just trying to pace myself through it. I most certainly look forward to going home and going to bed early.”

During the game, Rivera wore a shirt that said, “RIVERA STRONG.” The players wore the same black shirt during warm-ups as a tribute to their coach and his strong will.

“It means a lot just to see him come fighting,” cornerback Kendall Fuller said. “Not just today, but seeing him on Wednesdays, Thursdays and Fridays. It motivates all of us to go out there and keep fighting and never quit.”

Washington may have difficulty winning this season, but the team will never stop working hard for its coach, who sets an example with his relentless effort and positive outlook. It was a struggle for Rivera on Sunday, but he was calling plays and rooting for his players all the way to the final whistle.

“It shows who he is as a person,” running back Antonio Gibson said. “For him to be going through what he’s going through and come out and still coach us through it, give us speeches, support us, it means a lot.”

But Haskins appreciates that guidance, especially from someone who’s got so much going on in his life besides football.

“He is somebody we see as our main leader and our head coach and we trust him,” Haskins said. “It’s hard to watch him struggle and hard to watch him go through chemo and then come in and bring a whole bunch of energy to practice and still coach. But he loves it, and we’re going to stay behind him and try to make his job as easy as possible.”

Rivera wants to help this team improve, and to do so he figures he’s going to be on the sideline. But, aren’t there some of his friends and family members who have kindly suggested that it might be wise for him to take a break?

“Oh yeah, certainly there are,” he acknowledged. “I will listen, too.”