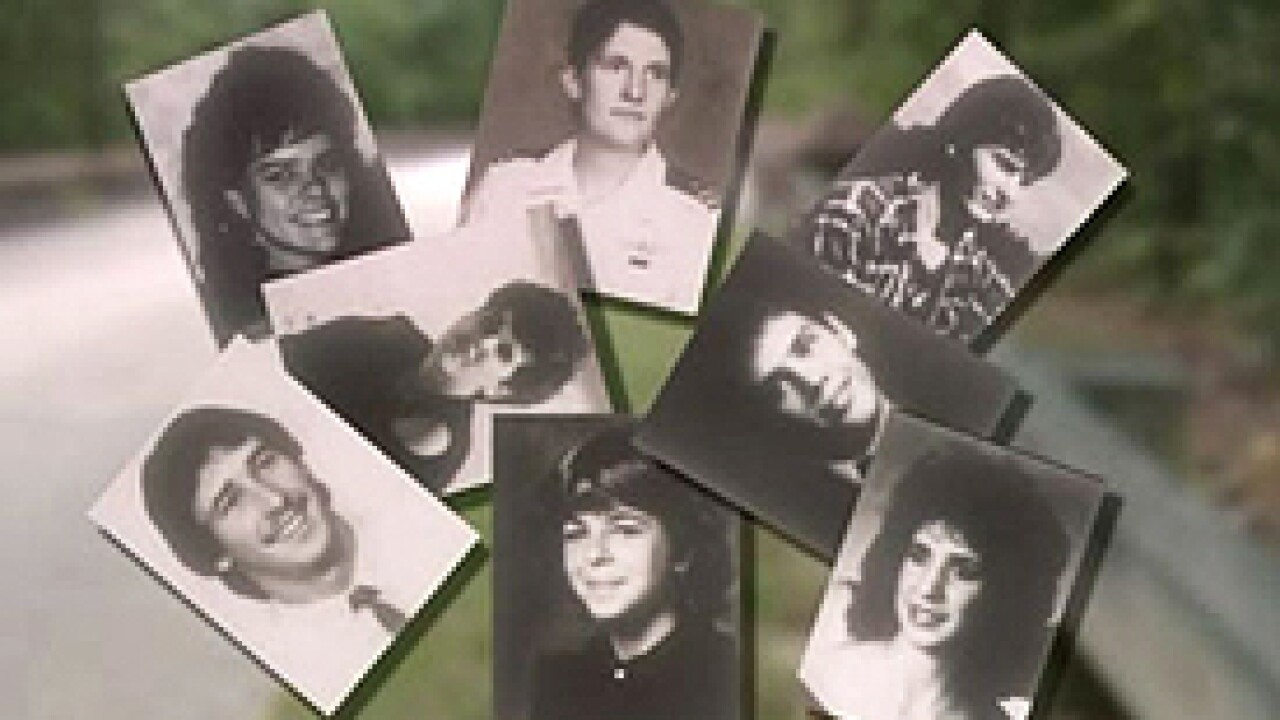 Someone has leaked graphic crime-scene photographs of the most notorious serial killings in Virginia history, the Colonial Parkway murders.

For two decades, the crime-scene pictures have been secret, critical evidence in the hunt for a serial murderer. They show how the Colonial Parkway Killer stalked couples in cars, stabbed some and shot others, and then discarded their bodies. And got away with it.

He shoved a Honda off a bluff with two bodies inside. He snatched a couple from their truck, leaving their clothes inside. He did it again with a Toyota, and one final time at a rest area with a Chevy Nova.

The rest of the leaked images depict more than can be shown on television. They detail where the knives slashed and the bullets struck. And they show exactly how the unknown killer left the bodies.

Joyce Call's brother was one of the victims.

"They took him and Sandra and they put his clothes back in the car, just tossed them. You know, all his belongings."

For more than 20 years, the Colonial Parkway Serial Killer has kept his secrets. But the police and federal agents trying to catch him have not. For at least a year, and maybe for many years, these pictures have circulated among civilians. How they got out is now the core of an FBI investigation, and source of disgust for the families who lost loved ones.

"These were human beings. They were brothers, sisters, sons, daughters,' says Joyce Call. "They were people and they were loved. Just to have the pictures floating around like that is very disrespectful."

Her brother Keith was killed on a first date with Cassandra Hailey. Keith took her for a drive down the Colonial Parkway in his red Toyota Celica. Her brother's car is in a crime-scene photo never meant to be public. Joyce says she found out about the leaked photos in a phone call, not from the FBI, but from a family friend.

Fred Atwell says this investigation into the leaked photos shouldn't be hard.

"It's an unsolved crime, number one. None of these murders have been solved, and the photographs are out in the public. I just don't think it's right."

He's a former Gloucester deputy, who, almost a year ago, says he told authorities who leaked the pictures, how they got out, and who has them. And, he says, he was ignored.

"I took them to the FBI and the state police, and nobody has done nothing."

Atwell says a friend of his, a security-company owner, asked him last year to teach a class about the killings. From 1986 to 1989, four couples were either shot or slashed on the Parkway or and in other secluded spots.

Fred Atwell was a deputy when the killer prowled this Parkway. But he didn't really know much about the case, or the couples, so he declined to teach the class. To change his mind, Atwell's friend told him he had crime-scene photos from the Parkway Murders. Atwell agreed to take a look - and he made copies.

"Well, we looked into it. I think we understand where it came from. I can tell you that we recovered all the copies from the folks that we've contacted that had them. They're no longer there."

But that's a recent development. After Atwell spoke to NewsChannel 3, we called the FBI. And only then, according to Atwell, FBI agents suddenly came knocking. Atwell says they asked for his copies, and seized photographs from the school, too. Atwell says he couldn't get a return call, until NewsChannel 3 got involved.

Hanlon declined to explain what happened between Atwell's first complaints, and this recent scramble to retrieve the photographs. To the Call family, the FBI did not do enough to protect the families from this indignity, and protect the evidence of such terrible crimes.

Keith Call's brother Chris is upset. "Incredibly intrusive. I don't know the law, but I hope it does not, in any way, jeopardize the case if they do find somebody."

Hanlon says he can't speculate how the leaked evidence might affect a prosecution because there's never been anyone to prosecute. But he says he says the FBI did take this breach seriously, even if they didn't take action until a few days ago.

"I think any time you have things out there in the public domain of somebody's loved one, and this is still an open case, that yeah, that's a serious matter."

So much time has passed the families have just about given up hope for any resolution.

But the FBI isn't giving up, and is now using new science to search for an old killer.