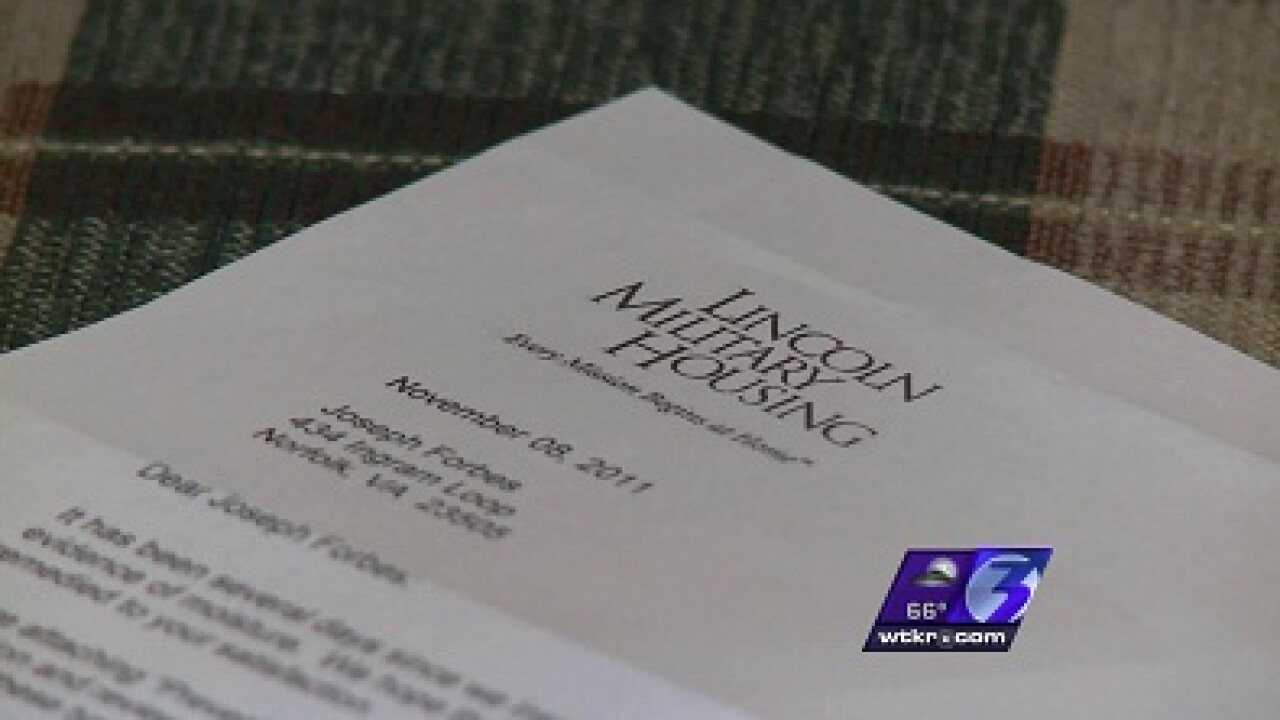 After airing the story about mold in military housing, NewsChannel 3 was thrown out of Lincoln Military Housing offices. They did not want to answer questions about reports of mold in their homes.

After our first story aired about Shelley Federico and Sabrina Baxter, two military wives living with mold, more than 40 families living in Lincoln Housing came forward to NewsChannel 3 and they shared photos and invited us into their homes. But Lincoln did not make this an easy task.

During our first visit of the day to a home in Norwich Manor, Lincoln’s security company, Signal 88, showed up. They told us to leave the property immediately because we didn’t have permission from Lincoln to be there.

We were visiting Cristina Deetz. She showed us what she thinks is mold growing on the ceiling of her son’s bedroom.

“They told me this was dust, nothing to worry about. It’s obviously mold. This is what they breathe when they sleep at night,” says Christina. “I see my son suffering, and I know there is nothing I can do.”

Krystal Forbes also worries about her son. He has cerebral palsy and is confined to a wheelchair.

She was our second visit of the day. Her home is in the Ben Morrell Housing Complex.

This Navy wife says not only was mold found in their front wall by contractors, but she also found what appears to be mold in the elevator that her son uses every day.

“I’ve been told by two or three contractors that it’s been mold, but Lincoln won’t admit to that,” says Forbes.

NewsChannel 3 received images from yet another home in Ben Morrell where they opened up one of the walls after the tenant complained of water damage. The pictures plainly show what looks like mold growing on the wooden boards, but none of these wives know for sure. Lincoln Military won’t test for mold, and these families don’t have the money to pay for it.

Like Angela Baxter who tells us mold and water damage caused her ceiling to fall in twice while she lived at Sandpiper Crescent.

“They told me I was seeing things and that if it was mold, the contractors would have told them it was mold,” says Baxter.

Throughout our day of traveling, several Lincoln residents called us saying that company managers were going door-to-door to everyone who commented on our Facebook page about the story.

Still, Lincoln Military regional managers would not return our phone calls or agree to go on camera.

We showed up at one of their corporate offices on Windsor Oaks Blvd. in Virginia Beach and no one would talk to us.

Forty families have come to us with mold issues so far.

Even though the Navy tells us they sold all of these homes to Lincoln years ago, is the military taking responsibility for these sailors, soldiers, marines and airmen who live there?

The investigation here at NewsChannel 3 will continue until we get results.