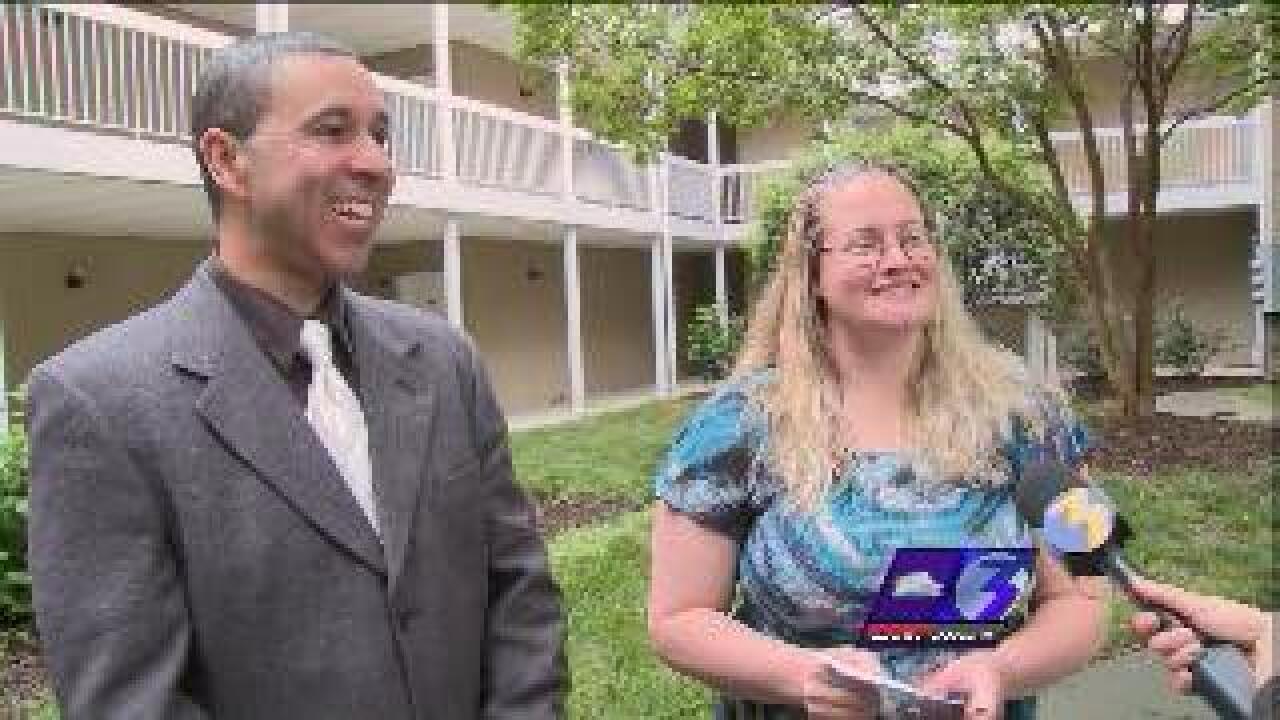 You would never know it by looking at him now, but just a few weeks ago, Jose Febres was a homeless man.

“Not every homeless person has a substance abuse problem, alcohol or even mental illness—some of us have just fallen on hard times,” said Febres.

In June of 2011, Jose was laid off from his job as a supervisor at an AT&T call center in Atlanta, so he decided to move to Virginia Beach, to be near NAS Oceana, where his military career began.

He applied to hundreds of jobs, but just couldn't get hired.

“I’ve done everything from government jobs all the way to dishwashers, and the dishwashers aren’t even hiring,” said Febres.

The only things that kept him going were his two Jack Russell Terriers, Lady and Copper.

“Those dogs are the only things I have. They are my companions, my family. I’ve lost a lot of things in my life, and I am trying to hang on for dear life of the last things I have, which are two little creatures who love me unconditionally,” said Febres.

But after a few months, Jose says a disagreement with his hosts forced him to choose between having a roof over his head and his beloved pets.

“When I was presented with that situation, I said to myself, ‘This is a tough decision but it’s not that tough.’”

So Jose left, with Lady and Copper.

After five years in the military and another 25 years in the work force, Jose suddenly became a statistic; just another unemployed veteran living on the streets, sleeping on wooden benches along the Virginia Beach boardwalk.

“What really got me were the nights. With the cold wind blowing off the ocean, my dogs were shivering, and it was really sad,” said Febres.

Little did Jose know, his fortunes would begin to turn around when he reached out to the local Veterans Affairs department for help—he was able to reach employment specialist Kathy Herring.

“He called the 800 crisis hotline, and during the assessment, he said he didn’t want a hand-out, but he wanted a job,” said Herring.

Kathy also happens to be a NewsChannel 3 viewer, and after talking to Jose, she immediately thought about a WTKR story that aired back in February about Dogs on Deployment.

“I saw a Channel Three news clip, and it mentioned dogs, deployment, veterans, out of the country,” said Herring.

The non-profit's mission is to find temporary homes for the pets of active duty military and veterans in need, so Kathy thought it would be perfect for Jose.

She contacted Dogs on Deployment, and they posted Jose's story on their Facebook page.

The response was overwhelming. Their supporters raised over 400 dollars for Jose, and many volunteered to take in Copper and Lady until Jose found a place to live.

One of those who responded was Yvette LaChute, yet another dedicated NewsChannel 3 viewer.

“Once I started watching Channel 3, I saw the Dogs on Deployment news clip, and I joined,” said LaChute.

Yvette was also deployed to Afghanistan a few years ago as a Captain in the Army Reserves.

“Really, the only way I’ve survived thus far other than God is through student loans and VA benefits. It’s the only reason I’ve been able to keep a roof over my head, so I empathize with Jose,” said LaChute.

At first, Yvette only planned on taking care of Copper and Lady--but after meeting the veteran in person, she decided to take Jose in as well.

“When she surprised me and told me that, I was shocked! I was like, whoa, what is this?” said Febres.

“For moral reasons, it’s the right thing to do, to help other people, that’s really what it’s all about,” said LaChute.

But now, with two mouths to feed, paying the bills is harder than ever.

“It’s been difficult long before I met Jose, in terms of getting stuff paid every month,” said LaChute.

“We are just statistics of the economy, but I’m optimistic it’s going to get better really soon,” said Febres.

They had no clue how soon that good news would come, courtesy of NewsChannel 3.

We surprised the pair with money orders—enough to pay their entire May month’s rent.

“I’m just surprised, awed and shocked that someone would be so nice,” said LaChute.

“We are truly grateful for this, I really do appreciate it. It’s NewsChannel 3 that gets all the credit!”

Even though Yvette took Jose and his dogs in, its only temporary--Jose still needs a permanent apartment, means of transportation, and money and to get all that, he needs a job!

If you want to take action to help hire a vet, Jose, Yvette and so many other military vets have great skills to bring to employers. They just need a chance, and hopefully, someone will give that to Jose.

If you want to volunteer for Dogs on Deployment, just go to their website, www.dogsondeployment.org