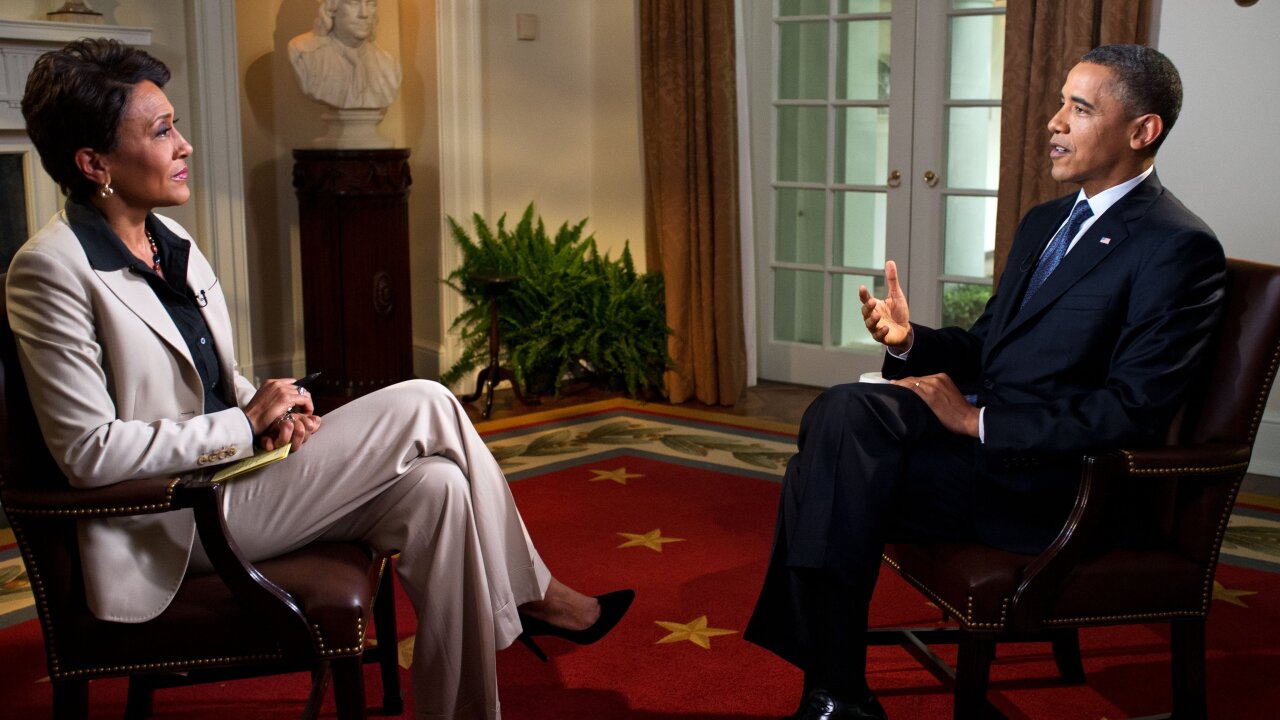 President Barack Obama sits down for an interview with Robin Roberts of ABC’s Good Morning America, in the Cabinet Room of the White House, May 9, 2012. In the interview he expresses his view that gay couples should be allowed to get married.

“I’ve always been a fighter, and with all of your prayers and support, a winner,” Roberts said in a online message Monday.

Roberts, 51, was diagnosed with myelodysplastic syndrome, also called MDS, on the same day in April that her show beat out NBC’s “Today Show” in the ratings for the first time in nearly 16 years, she said. “Talk about your highs and lows!”

“Then a few weeks ago, during a rather unpleasant procedure to extract bone marrow for testing, I received word that I would interview President Obama the next day,” Roberts said. “The combination of landing the biggest interview of my career and having a drill in my back reminds me that God only gives us what we can handle and that it helps to have a good sense of humor when we run smack into the absurdity of life.”

MDS is “a disease of the blood and bone marrow and was once known as preleukemia,” Roberts said in her message on the ABC News website.

It can be brought on by chemotherapy and radiation, treatments that Roberts underwent after her breast cancer diagnosis. “Sometimes the treatment for cancer can cause other serious medical problems,” She said.

“My doctors tell me I’m going to beat this — and I know it’s true,” Roberts said.

While information found online about MDS can be “some scary stuff,” Roberts said her doctors told her it doesn’t apply to her. “They say I’m younger and fitter than most people who confront this disease and will be cured.”

One big advantage for Roberts is her older sister, Sally-Ann Roberts, will donate bone marrow for a transplant later this year, she said.

“Bone marrow donors are scarce and particularly for African-American women,” she said. “I am very fortunate to have a sister who is an excellent match, and this greatly improves my chances for a cure.”

The announcement, made online and on her ABC show, came Monday because she is starting chemotherapy treatments in preparation for the transplant, she said.

Roberts will “miss a day here or there,” but she will continue to work through her treatments, she said. “I love what I do and the people with whom I do it. Along with my faith, family and friends, all of you at ABC News give me the motivation and energy to face this challenge.”

She will “miss a chunk of time” when she has her bone marrow transplant, she said.

When I faced breast cancer, your prayers and good wishes sustained me, gave me such hope and played a major role in my recovery,” she said. “In facing this new challenge, I ask humbly for more of your prayers and love — as I will keep you in mine and update you regularly on my condition.”

Roberts began contributing to “Good Morning America” in 1995 and was promoted to co-anchor in 2005. She previously was a sports reporter for ESPN and television stations in Atlanta, Nashville and Mississippi.

She was a star player on the Southeastern Louisiana University women’s basketball team, where she earned a communications degree in 1983.