Heat wave causing deaths across the US 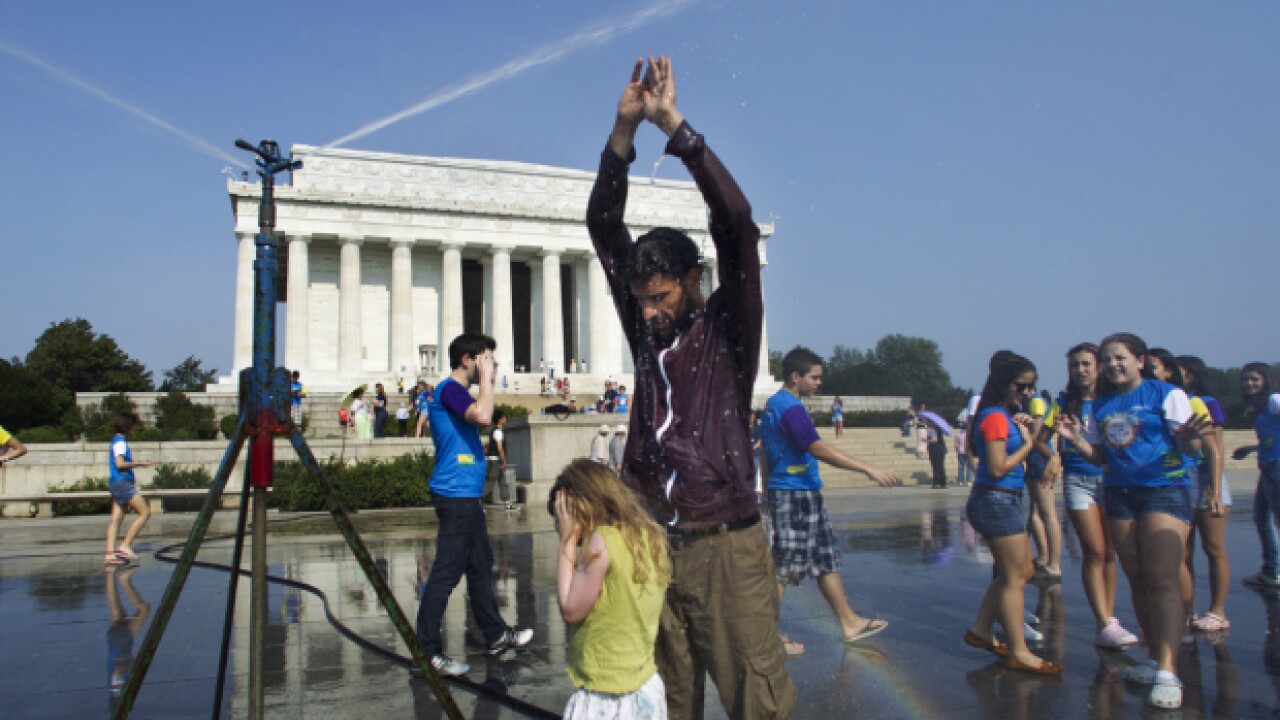 Highways buckled across the country, the waters of Lake Michigan were unusually warm for this time of year and even a minor train derailment outside Washington was blamed on heat as the hot weather gripping much of the country only worsened Saturday.

Temperatures of more than 100 degrees were forecast in Philadelphia and excessive heat warnings were issued for several states in the Midwest as the days of smothering heat piled on, accompanied by severe storms that have knocked out power in spots from Michigan to the East Coast.

Most notable was last weekend’s sudden and severe storm that drenched the mid-Atlantic region, where thousands remained without electricity a week later.

At least 24 deaths have been blamed on the heat and several others on the weather or a combination of the two. Hundreds of thousands remained without power Saturday, mostly in West Virginia, Ohio and Michigan.

One man figured out a way to beat the heat: stay in the car.

That was the plan for 60-year-old Roger Sinclair of Batavia, Ill., who was headed home Saturday from Detroit, where he’d spent a few days visiting an old friend and catching Friday night’s Tigers game.

While he enjoyed the game, a 4-2 Tigers win, the conditions were less than ideal.

Before heading home, though, Sinclair wanted to see a Great Lakes ore carrier make its way through the city’s waterways. So, he tracked one down the Detroit River, driving ahead of it and parking on Belle Isle, which sits in the middle of the river between the city and Windsor, Ontario.

Sinclair, standing along the riverbank and shielding his eyes from the sun, watched the Algomarine slowly head west.

“You just don’t see this in Chicago,” said Sinclair, a dispatcher at a plumbing company’s call center.

As the vessel traveled out of sight, he walked to his car.

“This is how I’ve dealt with it the last couple of days,” he said. “A lot of time in the car.”

At New York City’s Penn Station, the air conditioning was falling short of full capacity. Amtrak officials have said for weeks that they’ve been trying to adjust it. The doors were left wide open at a half dozen locations around the two-block-wide underground station.

“It’s so hot I feel like I want to faint,” said Betty De la Rosa, 19, of the Bronx, who was working at a station doughnut shop.

The heat was also blamed for at least 24 deaths.

Nine people in Maryland have died of heat-related causes in recent days, the state said. Authorities in Chicago said heat was a factor in six deaths there, mostly among older people. Three deaths in Wisconsin, two in Tennessee and one in Pennsylvania were also reported to be heat-related.

In Ohio, a man in his 70s and two women — one in her late 60s, the other in her 80s — were found dead this week, said Dr. Jeff Lee, a deputy county coroner in the central part of the state. He said all three were suffering from heart disease but died from stress caused by high temperatures in their houses. Temperatures inside were stifling, recorded in the 90s in two cases, with windows shut and no ventilation. The houses lacked electricity because of recent power outages.

“If they had gotten cooling, we would have expected them to survive,” he said.

Relief was on the way in the form of a cold front as the weekend ends, but forecasters expected it to bring more severe weather, too.

The rain should help dry spells in many places. Much of Arkansas is enduring brown grass and seeing trees lose their green, and farmers in Ohio are growing concerned about the dry conditions, considered among the worst of the past decade.

In Chicago, perspiration beaded on the face of street magician Jeremy Pitt-Payne, whose black top hat and Union Jack leather vest weighed heavily as he waited to board a Chicago River water taxi that would take him to his sidewalk stage downtown.

“This is part of the character. I’m a magician from Britain,” Pitt-Payne said in a British accent. “I may lose the vest by the end of the day.”

Pitt-Payne has worked throughout Chicago’s three-day stretch of triple-digit temperatures. His shows have been shorter and crowds have dwindled from his usual of 50 to about 20 people.

His trick for beating the heat? He starts his shows at about 2 p.m. “when the Trump Tower is gracious enough to block out the sun” along his stretch of sidewalk. “That’s when I start.”