Have you seen this python in York County?

York County, Va. - York County officials are looking for a Burmese Python in the Blackwell Trailer Court area of Oriana Road in the Grafton section of York County.

The pet snake is unaccounted for and may have escaped its enclosure and residence.

Animal Control Officers are currently canvassing the area trying to locate the snake. The snake is described as being approximately 10 feet in length with numerous dark-colored areas and brown blotches bordered in black down its back.

Captain Paul Long with Yorktown Emergency Management says they have received conflicting reports on the snake.

"The initial reports were received third party. So we didn't actually get the reports from the owner or the caretaker," Long said.

The snake's owner, Scott Butz, told NewsChannel 3 that the snake was being cared for by a tenant living in a trailer.

Part of the rent agreement was to care for the python, named Pepper. 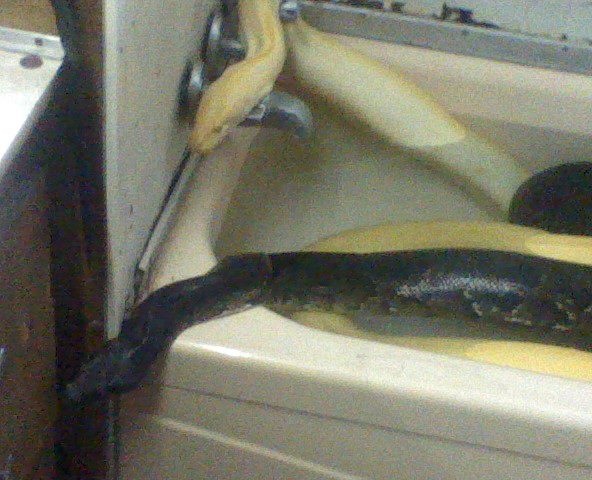 Butz says he thinks his tenant may have sold the snake for cash, angry about being evicted.

According to Butz the snake is worth $500.

While Yorktown officials continue to sort out whether the snake escaped or if it was sold, Long says they will continue to search for it as though it did escape.

"We are airing on the side of caution for public safety purposes. Just making folks in the neighborhood aware why we are out here."

That includes neighbors like Michelle Martin who are on edge with the thought of the snake being loose in their area.

"The snake could be anywhere out there in those weeds, anywhere! And it could come up here, it could come in anybody's yard. Everybody has small dogs here. There are kids everywhere in the neighborhood," Martin said.

Pepper the python escaped about a month ago and was found by animal control officers.

Captain Long says it is not illegal to own a python as a pet in Yorktown.

Although pythons are typically afraid of people and will generally avoid them, special care is still required when handling them.

Residents are cautioned not to approach the snake if they see it, to remain a safe distance from the snake and to immediately call Animal Control at 757-890-3621. That number is active day and night.

Residents are warned not to attempt to follow, attract, pick up, handle, feed and/or antagonize the snake.