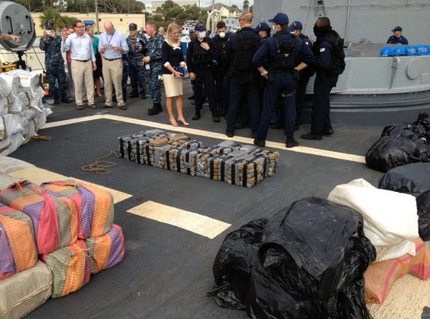 NewsChannel 3 is about to get an exclusive look at the tons of cocaine local sailors seized in the Caribbean.

Last month, NewsChannel 3 showed you the pictures of the more than two tons of cocaine seized by the USS Nicholas.

The crew worked with the Coast Guard – and even the Colombian Navy – to intercept a boat carrying the illegal drugs.

It’s considered the largest drug bust for the Nicholas.

The ship, and all of those drugs, arrived in Mayport, Florida yesterday.

Look for his report starting on NewsChannel 3 First at Four.

Navy and Coast Guard crews with bales of cocaine and marijuana seized on deployment. http://t.co/3TQKQvqH

Some of the 10,000 pounds of cocaine and marijuana being unloaded from the Nicholas. http://t.co/qGwqJOrt