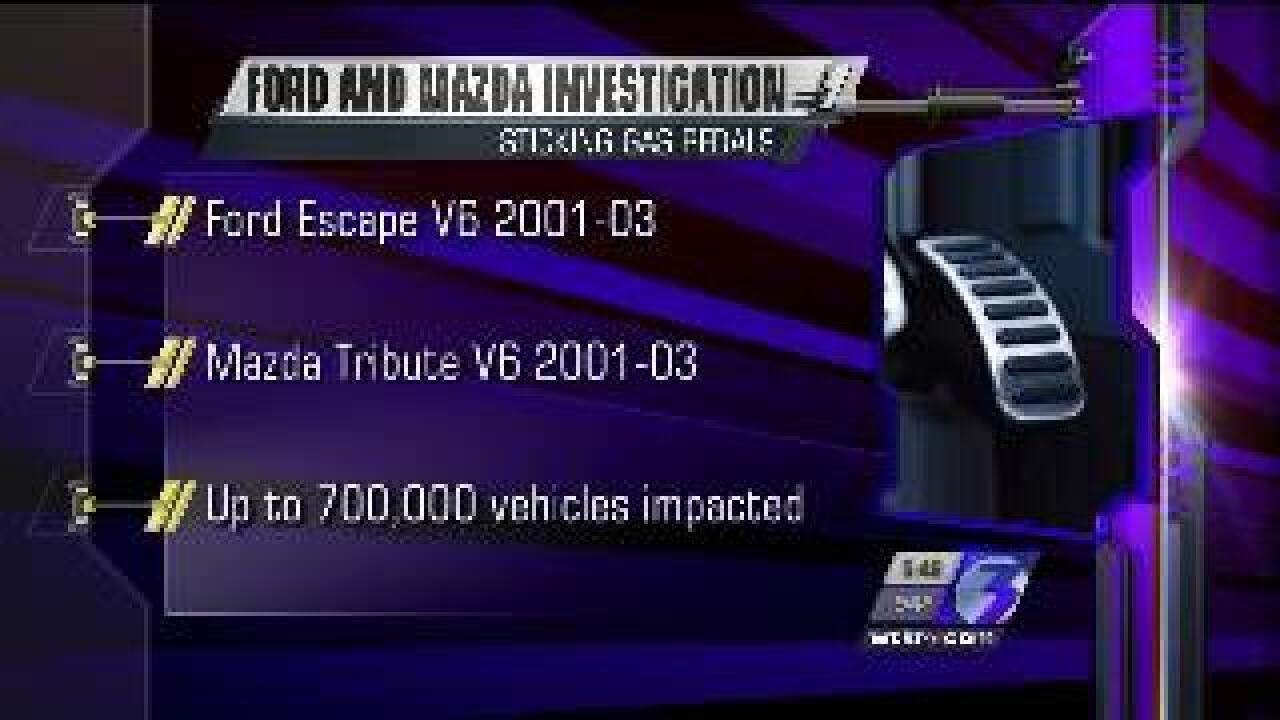 (CNN) -- After receiving nearly 100 reports of stuck gas pedals in Ford and Mazda vehicles, federal regulators said Tuesday they have launched an investigation into the problem, which is a suspected cause of one death and nine injuries.

The stuck accelerators are being investigated for their possible role in one fatal accident, 13 nonfatal crashes or fires and eight injury accidents, according to the National Highway Transportation Safety Administration.

The NHTSA now has identified 730,000 vehicles potentially affected, expanding the scope of vehicles in question. All 730,000 are 2001-2004 Ford Escape and Mazda Tribute SUVs with V6 engines, according to the NHTSA.

Mazda and Ford issued recalls in 2004 on models of the sport utility vehicles that had 3.0 liter six cylinder engines. Several of the reports to the NHTSA involve vehicles not covered by previous recalls, the agency said in a letter to Ford's Environmental and Safety Compliance Global Director on Thursday.

One complaint is based on a fatal crash that occurred in January 2012, the NHTSA said. Some of the complaints allege that failures may have been related to repairs made in response to safety recalls initiated in 2004, the investigation summary said.

The 2004 Ford and Mazda recalls were for the vehicle speed control cables in their affected vehicles. Letters were also sent to dealers and customers, according to filings on the NHTSA website.

"On your vehicle, it is possible that the accelerator cable may prevent the throttle from returning to the idle position, possibly resulting in elevated engine speeds while driving," Ford's letter to customers read. "An unexpected increase in engine idle speed may increase stopping distance and may result in a vehicle crash without warning."

The Center for Auto Safety petitioned the NHTSA to open a similar investigation on July 8. The petition was denied Thursday because part of the request is being covered by the agency's newly opened investigation.

The NHTSA has opened the investigation to assess "the scope, frequency and safety-related consequences of the alleged defect," the agency said.

Neither Ford nor Mazda responded to CNN's requests for comment.