What is that thing swimming in the James River?

Folks riding the Jamestown-Scotland Ferry Monday night got a surprise: a mystery creature swimming in the James River.

Vivienne McDaniel and Nat Elliott were both on the ferry around 8 p.m. when they spotted something swimming nearby. 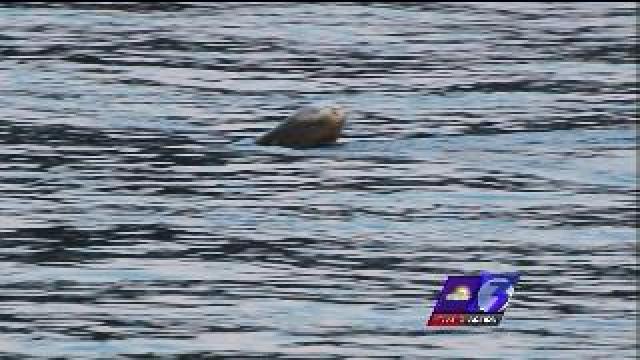 "I said, 'Hey, what in the world is that thing in the water?'" Elliott explained.

McDaniel went to her car to grab her camera and started snapping photos of the creature.

"When I looked at the pictures, I was like, 'Oh my goodness what is this?'" McDaniel commented.

Elliott says he has seen plenty of animals swimming in the James, including snakes, birds and even deer, but whatever was in the water Monday night was definitely a first for him.

"It was like a big, bald-like fleshy head shining and stuff. It was just bizarre. It was really weird," Elliott said.

Theories on what it could be have run rampant.

"Maybe it was the Loch Ness Monster come over to Virginia," Elliott joked.

McDaniel thinks it might have been a sea manatee that they saw from the ferry.

"I went and looked at pictures of it and it looked just like that to me now that it was a manatee," McDaniel commented.

Staff there say it's impossible to tell if the creature is a manatee just based on the photos; however, manatees are known to frequent Virginia's waterways this time of year.

Five to six are seen in Virginia each year and one has already been spotted in the Rudee Inlet area of Virginia Beach.

Manatee or not, McDaniel and Elliott say whatever was swimming in the river Monday night was something they had never seen before.