Mike Mather has been with the crew all week. Watch the video as Mike speaks with members of the crew about their drug seizing operations.

The USS Nicholas is just hours from home after patrolling both the Caribbean Sea and the Eastern Pacific Ocean for six months.

This ship and the men and women aboard have something to be proud of.

Their mission: to keep drugs out of Central America and the US - accomplished.

"I will tell you there is nothing like the feeling of watching contraband be hoisted onto the ship after 24 hours of either searching for them or chasing a vessel for 12 hours through the night."

"You're on call 24-7, so you might get a phone call at three in the morning and launch the helicopter because there is a suspicious vessel."

NewsChannel 3 was the only local station in Mayport, Flordia as more than 7,000 kilos of cocaine and 500 pounds of marijuana were taken off the ship. That's over $515 million worth of drugs.

This was a proud day for the USS Nicholas and her crew - a day some sailors got to share with their families.

"Proud of him, me and my wife are very proud of him."

For the last leg of their journey home, three dozen families celebrated an early homecoming.

"He asked me: Dad, how would you like to go on the ship? And I said, what are you talking about? He said my ship, the USS Nicholas and I said, yeah! And these fathers, mothers, sons, and daughters get to see firsthand life on a guided missile frigate with their sailors."

"It's actually great. He's never been on a war ship, his father was in the Army, but Navy and Army is a completely different world so he's enjoying it." 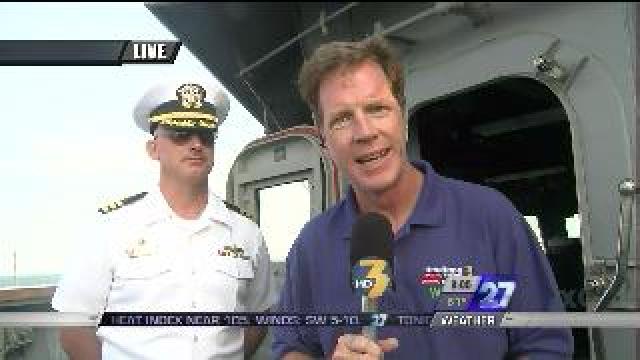