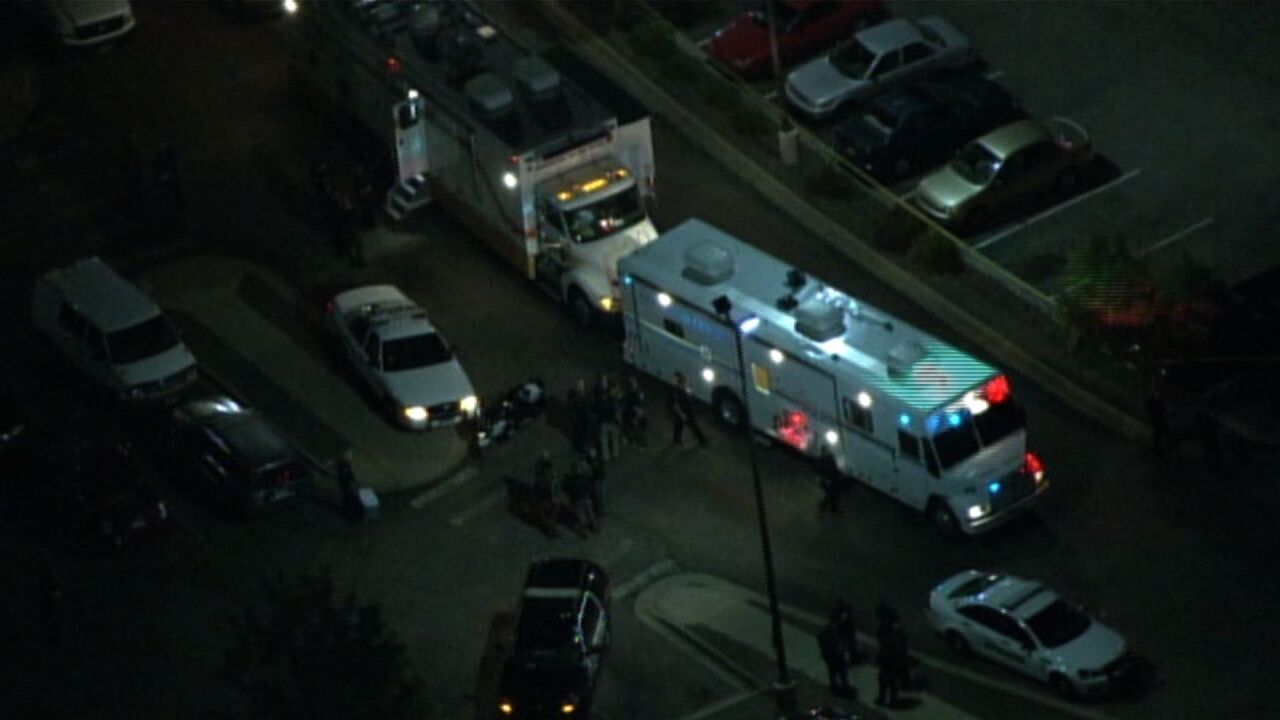 **EMBARGO: DENVER** A gunman opened fire at the Century 16 movie theater in Aurora, CO killing at least 12 people and injuring 50. The suspected gunman is in custody.

UPDATE: During a press conference at 9 p.m. Friday night, Police Chief Dan Oates told reporters that he will not release any details regarding a possible motive in the mass shooting at an Aurora, Colorado, movie theater, saying the details will be released as part of the criminal investigation.

The next briefing will be Saturday at 2 p.m.

According to CNN, James Holmes, the suspect in the shooting at a screening of the newest Batman movie, had colored his hair red and told police he was "the Joker," according to a federal law enforcement source with knowledge of the investigation.

According to a report from KDVR, Holmes purchased a ticket to the movie then went to his car through the back exit then came back.

They also say a reporter went to the dumpster at Holmes' apartment complex and pulled out human-shaped targets that had bullet holes in them.

The Pentagon says 3 U.S. troops were wounded in the Aurora shooting, and one sailor who was at the theater remains unaccounted for.

According to a release from the Department of Defense, one sailor was injured in the attack and another sailor known to have been at the theater is currently unaccounted for.

Two airmen were injured in the incident.

The Navy and the Air Force are working with the families of these service members to ensure they have the care and attention they need.

The release also says that the alleged gunman James Holmes is not a past or current member of any branch or component of the U.S. Armed Forces.

KDVR reports that Buckley Air Force Base confirms that the three casualties reported earlier by the Pentagon are actually injuries, not fatalities. No word on the further condition of those individuals.

Buckley AFB in Aurora, Colorado, is the closest military base to the scene of the shootings.

About 10,000 troops -- including members of the Air Force, Army and Marine Corps -- are stationed at Buckley. Soon after the shooting, the base initiated a head count, Lavoie said.

One of the units on base is the 743rd Military Intelligence Battalion.

A post Friday on its Facebook page said that the Traumatic Stress Response Team (Mental Health Support) and Emergency Family Assistance Control Center (EFACC) had been activated at the base chapel. "If you or family members need assistance or counseling following the aftermath of the Aurora Movie Theater shooting, you can meet with the teams standing by to help you," the posting says.