After day of agony, families in Colorado get tragic confirmation 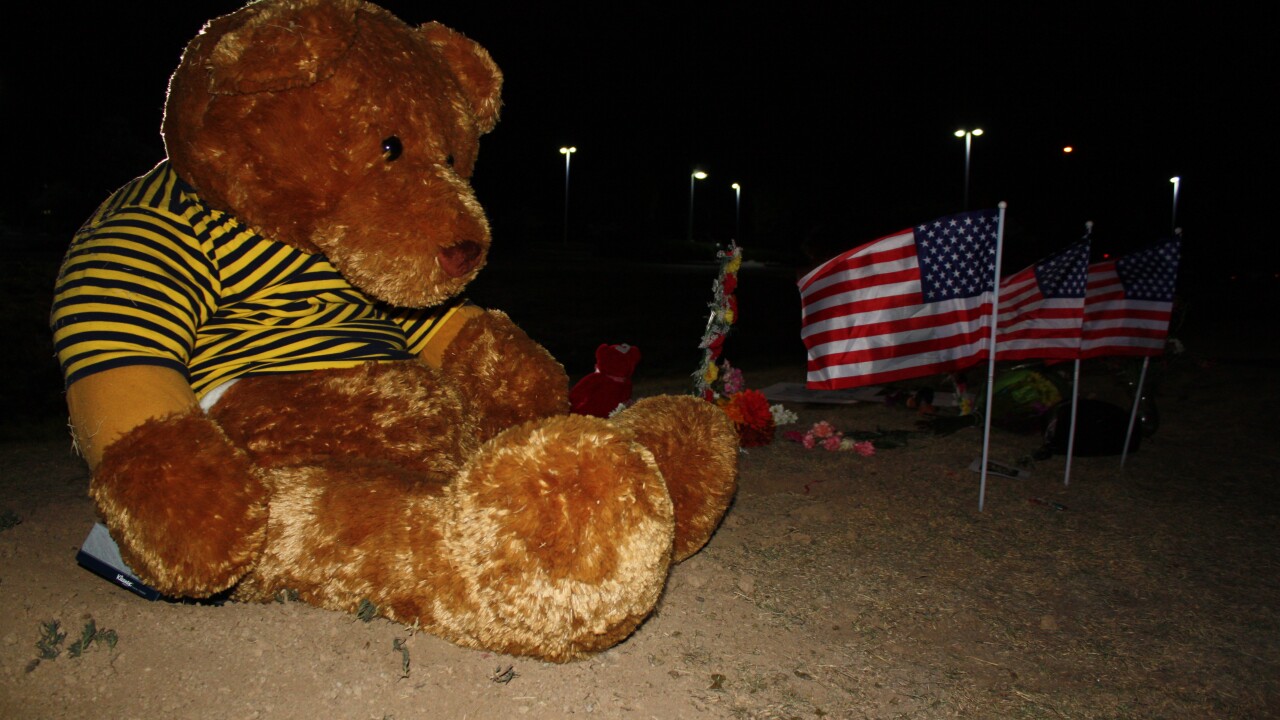 Candle and flower memorials sprout up outside the perimeter of the Century 16 movie theater where a deadly mass shooting took place at a midnight showing of the “Dark Knight Rises.”

AURORA, Colorado (CNN) — Amidst the terror and fear inside the movie theater as a gunman sprayed bullets, there were also moments of heroism, as emerging stories show.

Matt McQuinn was one of the 12 killed in the mass shooting in Aurora.

McQuinn was attempting to provide cover for his girlfriend when he was hit, said a family attorney, Robert L. Scott.

He saved Samantha Yowler’s life, though she was hit by a bullet, Scott said. She is recovering at the hospital.

More stories are expected to surface Saturday morning when police publicly release a list of the victims.

Grief counselors were available Saturday to help the bereaved in the Colorado shooting, hours after authorities started the dreadful task of notifying relatives of the victims of the movie theater massacre.

“It took about 19 hours to hear from law enforcement, which was agonizing and I thought just outright cruel to all the victims’ families,” said Anita Busch, who said her cousin, Micayla Medek, was among those killed. “We had been desperately trying to find her.”

Families of the deceased had not been notified until Friday night because an active investigation was under way at the crime scene in Aurora, police said.

Alex Sullivan’s relatives were also among those who got the dreaded news.

“The Sullivan family lost a cherished member of their family,” a representative for the family said in a statement. “Alex was smart, funny, and above all loved dearly by his friends and family. Today was his 27th birthday.”

His uncle, Jim Loewenguth, said Sullivan was an employee at the theater, but was off that night.

Sullivan was married and loved to cook, Loewenguth said.

He was “full of joy” and “never had a bad chip on his shoulder,” he said.

Another of the fatal victims was John Thomas Larimer, a service member in the Navy who was serving at his first post, said his father, Scott Larimer.

A Navy notification team officially informed the family in Crystal Lake, Illinois, around midnight Saturday, a statement from the family said.

“I am incredibly saddened by the loss of Petty Officer John Larimer–he was an outstanding shipmate, “said Cmdr. Jeffrey Jakuboski, Larimer’s commanding officer. “A valued member of our Navy team, he will be missed by all who knew him. My heart goes out to John’s family, friends and loved ones, as well as to all victims of this horrible tragedy.”

Childress was an Air Force reservist on active duty with the 310 Force Support Squadron.

As the news of the victims’ names spread, online tributes were created.

A Facebook page was created in memory of A.J. Boik, who had been in the theater with his girlfriend and another friend.

The father of Boik’s friend said that his son “was the first to hightail it to the lobby,” where he reunited with Boik’s girlfriend, but they couldn’t find Boik.

There was blood on the girlfriend’s clothes, but it wasn’t hers, James Crofter said.

While relatives endured a day of anguish Friday, racing between Denver-area hospitals and trying to learn the fate of their loved ones, some already knew the answer.

Aspiring sports reporter Jessica Ghawi was among those killed, her brother Jordan said on his blog, citing the coroner’s office.

Ghawi, in her mid-20s, narrowly avoided another mass shooting in Toronto just last month — an incident that prompted her to reflect on life on her blog.

“I can’t get this odd feeling out of my chest,” Ghawi wrote in a June 5 post. “This empty, almost sickening feeling won’t go away. I noticed this feeling when I was in the Eaton Center in Toronto just seconds before someone opened fire in the food court. An odd feeling which led me to go outside and unknowingly out of harm’s way. It’s hard for me to wrap my mind around how a weird feeling saved me from being in the middle of a deadly shooting.”

The Toronto shooting left one person dead and seven others injured.

“I was shown how fragile life was on Saturday. I saw the terror on bystanders’ faces. I saw the victims of a senseless crime. I saw lives change,” she wrote at the time. “I was reminded that we don’t know when or where our time on Earth will end. When or where we will breathe our last breath.”

Some families found relief at the end of an emotional roller coaster.

Patricia Legarreta, who went to the new Batman movie with her fiance, their 4-month-old baby and 4-year-old daughter, tearfully recalled what happened when the shooting took place.

Legarreta, who suffered leg wounds, said she grabbed her son and daughter and headed for the door. “There was a moment where my daughter tripped. I pulled her up and I was just dragging her and I was just thinking we’ve just got to get out.”

Legarreta and her fiance, Jamie Rohrs, spoke about their ordeal on CNN’s “Piers Morgan Tonight.”

“I’m trying to get out of the way, but people are falling next to me,” Rohrs said. Then he thought, “this is it.”

In the chaos, the couple became separated. Rohrs eventually learned Legarreta and their children made it out of the theater.

At the hospital, the couple had an unexpected conversation.

“He had gone to the restroom and came out,” Legarreta said of Rohrs. “And he just looked at me and he said, ‘I know this is not the time and place, but will you marry me?’ And I said, ‘yes.’ Going through 10 minutes of thinking he was dead and I would never see him again, you never want that feeling again.”

The youngest of the injured, a 4-month-old boy, was treated and released.

Some victims of the shooting said they cannot believe they survived the hail of gunfire.

Stephen Barton was shot in the neck and recovering in his hospital bed when he described the “cold and calculated” assault at the Century 16 movie theater.

For residents of Aurora, a chaotic and harrowing day ended with a search for solace. The community lit candles and prayed Friday night to honor the victims of the rampage.