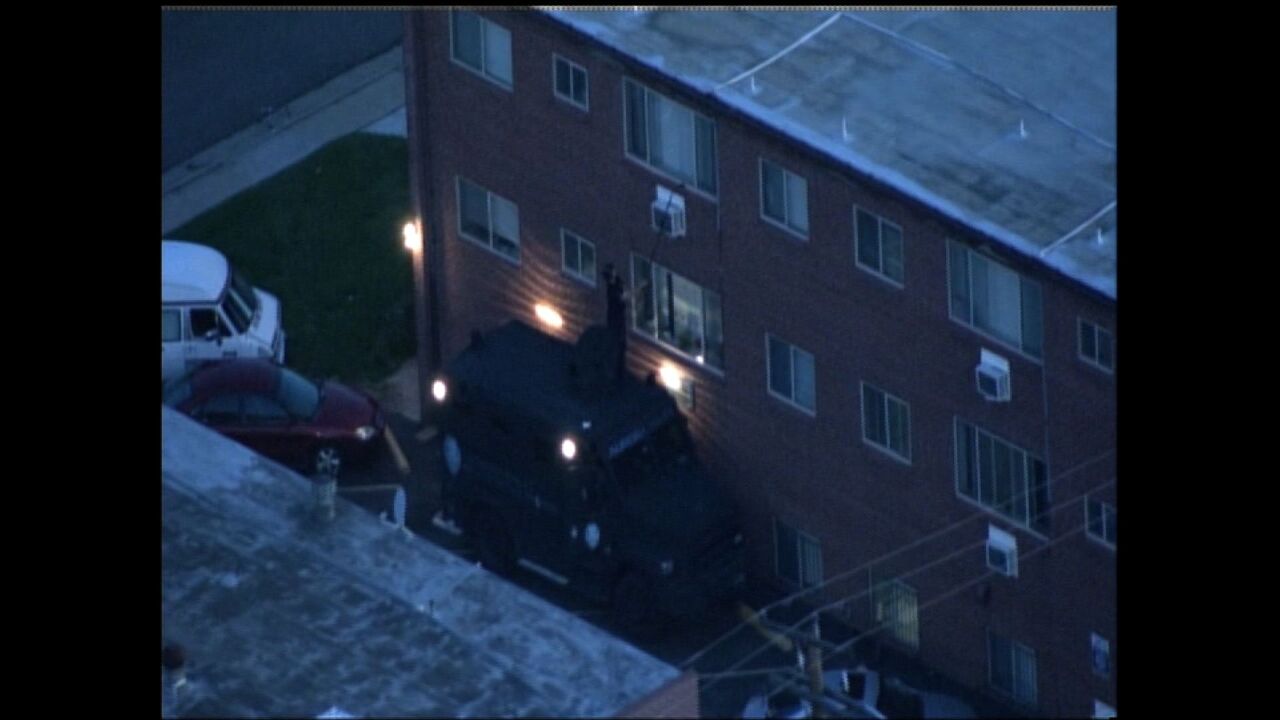 **EMBARGO: DENVER** A gunman opened fire at the Century 16 movie theater in Aurora, CO killing at least 12 people and injuring 50. The suspected gunman is in custody.

AURORA, Colorado (CNN) — Investigators carried out a “controlled detonation” Saturday inside the booby-trapped apartment of movie-theater shooting suspect James E. Holmes, the latest move in a three-step effort to enter the apartment.

“We have been successful in disabling a second triggering device,” said police spokeswoman Sgt. Cassidee Carlson. “Although not certain, we are hopeful we have eliminated the remaining major threats. However, we will not know this until we enter the apartment.”

Inside Apartment 10 remained “all kinds of hazards” that would take hours to collect and mitigate, she said. “In the event another triggering device is found, we will do another controlled detonation.”

The blast came after a policeman yelled, “Fire in the hole!” three times.

After day of agony, families in Colorado get tragic confirmation

Live video from our sister station KDVR in Denver

‘I see people walking out with blood on them’

Fire officials were on standby, but there was no immediate indication of a fire.

The detonation was carried out by a robot at 11:40 a.m. (1:40 p.m. ET). The official said the fact that little smoke was visible after the incident was a good sign. Officials were deciding whether to send people inside, the law enforcement official said.

Earlier, a trip wire and an incendiary device had both been dealt with, Carlson told reporters. “This trip wire was set up to clearly detonate when somebody entered the apartment, and it was set up to kill that person,” she said. “That could have been a police officer executing a search warrant. This is some serious stuff our team is dealing with.”

It was not clear where all the explosives had been located, though many have been seen in the living area with circuitry reaching into the kitchen, a law enforcement official with direct knowledge of the operation told CNN.

One of the incendiary devices appeared to be improvised napalm and others appeared to be mixtures that, if combined with other materials, could cause an explosion, the official said.

Approximately 30 aerial shells are in the 850 square foot apartment, Carlson said. They will be placed on sand trucks and taken to a disposal site for controlled detonation, she said.

Officials had been hoping to avoid detonations to limit any loss of evidence, she said.

“Jars of black powder” and what appear to be “liquid accelerants” attached to the explosive devices are also inside Apartment 10, another law enforcement official said. “He placed other chemicals to enhance fire/thermal effect of IEDs,” the official added about Holmes’ apartment.

“He has a level of expertise, not crude,” the official said.

About 100 officials were called in to oversee the entrance into Apartment 10 at 1690 Paris Street. Federal personnel flown here from out of state include bomb technicians from the Bureau of Alcohol, Tobacco, Firearms and Explosives and Explosive Ordnance Disposal specialists. Police evacuated five buildings Friday, including the one where Holmes lived, after he told them he had rigged his apartment with explosives.

Shortly after police apprehended Holmes in the rear parking lot of the Century Aurora 16 movie complex, where dozens of people had been shot, he told them that he had rigged his apartment, Police Chief Daniel Oates said Friday.

After the shootings, police arrived at Holmes’ apartment to find “techno-music” blaring from the bedroom, according to a law enforcement source, who spoke on condition of anonymity.

The music was on a timer and apparently started once he left for the movie theater, said the source, who was not authorized to release details of the investigation to the media.

Kaitlyn Fonzi, a 20-year-old graduate student at University Hospital who lives in the apartment beneath Holmes’, said she heard the deep-bass, reverberating music crank up around midnight Thursday, just as a sold-out crowd was settling into its seats at the Batman premiere a few miles away.

Fonzi said she walked upstairs to confront Holmes. She put her hand on the door handle to his apartment — it felt unlocked, she said, but she did not open it.

“I yelled out and told him I was going to call the cops and went back to my apartment,” she said.

Fonzi’s call got little attention — police said they were busy with the shooting and did not have time to respond to a noise disturbance, she said.

What she has learned about the booby-trap has left her shaken. “I am concerned if I had opened the door, I would have set it off,” she said.

Oates said Friday that it could take days to work through the apartment safely. While authorities did not say how many residents were evacuated from nearby buildings, the number is estimated to be in the hundreds.

Authorities began Friday night to allow families in four of the five evacuated buildings to return to their residences briefly to retrieve personal items, such as medication, identification cards and clothing.

A shelter was set up at Aurora Central High School for those forced from their apartments.