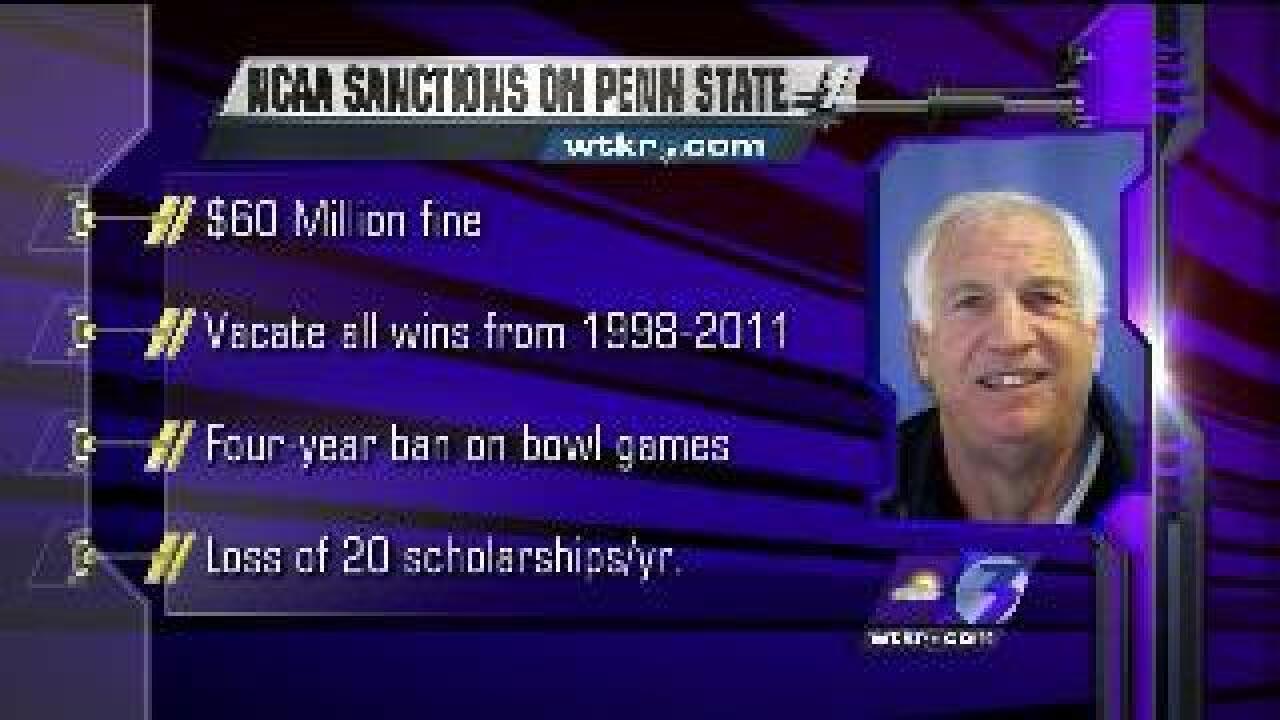 (CNN) — The National Collegiate Athletic Association announced a $60 million fine against Penn State University on Monday and banned its football team from the postseason for four years.

The school will also forfeit all football wins from 1998, NCAA President Mark Emmert said. That decision strips the late Joe Paterno of the title of winningest coach in major football college history.

While the school’s football program will not face the so-called “death penalty” that would have prevented the team from playing in the fall, the school might have preferred a one-year suspension because of the severity of the scholarship losses, a four-year postseason sanctions and other penalties, a source familiar with the case told CNN on Sunday.

The punishment is part of the continued fallout from the child sex abuse scandal involving former assistant football coach Jerry Sandusky, who was convicted in late June of 45 of the 48 counts he faced involving 10 young victims.

Emmert wrote a letter to Penn State President Rodney Erickson in November that included four questions he wanted the university to answer.

The NCAA felt the questions were answered by the Freeh report and therefore it could act before the university responded, a source familiar with the case said.

On Sunday, in State College, Pennsylvania, the 900-pound bronze statue of Paterno was removed from its place outside the 106,000-seat football stadium. Erickson said in a statement the statue is being stored in a “secure location.”

The statue was removed exactly six months after Paterno died of lung cancer. He died less than three months after he coached his last game, an October 29 victory over Illinois that gave him a major college record 409 wins, 111 of which came after 1998. Under Paterno’s 46-season tenure as head coach, the Nittany Lions won two national championships, went undefeated five times, and finished in the top 25 national rankings 35 times.

The tribute to the coach had become an object of contention after the child rape scandal involving Sandusky.

However, Paterno’s relatives said they believe taking down the statue serves no purpose.

“Tearing down the statue of Joe Paterno does not serve the victims of Jerry Sandusky’s horrible crimes or help heal the Penn State community. We believe the only way to help the victims is to uncover the full truth,” the family said in a statement.

“It is not the university’s responsibility to defend or protect Joe Paterno. But they at least should have acknowledged that important legal cases are still pending and that the record on Joe Paterno, the board and other key players is far from complete,” it added.

Dan Vecellio, a staff writer for the blog Black Shoe Diaries, said there were about 100 people who watched the statue taken down, put on a forklift and driven into the stadium through a loading-dock door.

“I now believe that, contrary to its original intention, coach Paterno’s statue has become a source of division and an obstacle to healing in our university and beyond,” Erickson said.

“I believe that, were it to remain, the statue will be a recurring wound to the multitude of individuals across the nation and beyond who have been the victims of child abuse,” he added.

Another tribute to Paterno — the university library that bears his name — will remain as it is, Erickson said.

The Survivors Network of those Abused by Priests (SNAP) called Paterno “a powerful man who acted selfishly” who “deserves no public honors whatsoever.”

“We’re glad the statue is gone but that’s just a tiny step forward,” SNAP spokesman David Clohessy said in a statement. “We as a society must learn that a good way to deter child sex cover-ups is to punish, not praise, those who instigate such cover-ups.”

Sandusky is expected to be sentenced in September. His legal team has said it will appeal the convictions.

Two former university administrators are awaiting trial for their role in the scandal, and more charges are possible as the state’s attorney general investigates what Penn State may have known about Sandusky’s behavior.

CNN’s Ross Levitt and Susan Candiotti contributed to this story.