Hundreds of jobs, millions of dollars coming to Southampton Co.

Hundreds of jobs and millions of dollars will soon be coming to Southampton County, Va.

A groundbreaking ceremony for Enviva was held Wednesday afternoon at the facility’s future location just outside of Franklin on Rose Valley Road.

Enviva manufactures wood pellets which are used as a renewable fuel source.

“It's a great, clean, renewable way to reduce emissions and generate the same amount of electricity,” said John Keppler, CEO of Enviva. 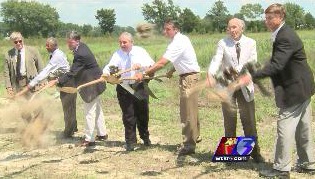 The company will be hiring about 300 construction workers to build the facility and about 70 employees to work at the plant.

“This is probably the biggest economic development announcement we've had in the last 20 years,” said Michael Johnson, county administrator.

Most of the wood pellets will be exported to Europe, traveling through the company's port in Chesapeake and creating more new jobs along the way.

“The ripples from this project are really broad,” said Johnson.

They expect several hundred supply chain jobs to be created as a result, from forestry to trucking.

Along with jobs, the new plant will also be bringing money to Southampton County.

“This particular project will generate, over the next 10 years, over 7 million dollars in direct revenue for Southampton County, so that's big,” said Johnson.

Especially for a community that took a big hit a few years ago when the International Paper Mill closed.

“I can't overstate it, I mean, I think when you looked at the attendance of this groundbreaking today, you see a community that is just absolutely hungry for good news,” said Johnson.

Keppler says they have not filled the positions at their new facility yet, and they are looking to hire people locally.

They’ll be releasing more information about how to apply as they begin the process.

You can also find some information on their website.