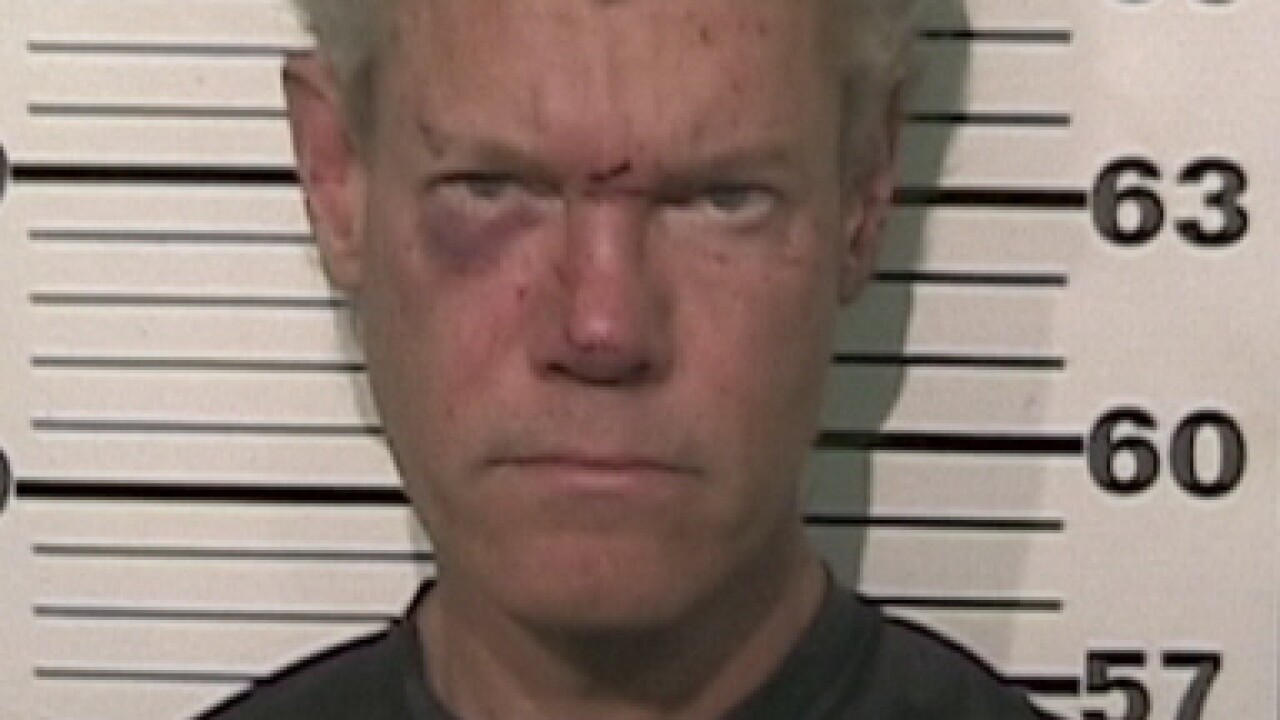 Musician Randy Travis was arrested Tuesday night, August 7, 2012 in Grayson County, Texas for Driving While Intoxicated and Retaliation, which is a felony.

(CNN) — Country music star Randy Travis, who pleaded no contest to public intoxication following the Super Bowl in February, was arrested again Tuesday after being found naked, smelling apparently of alcohol and lying on a remote stretch of roadway in northern Texas just before midnight, authorities said.

He was arrested for driving while intoxicated and felony retaliation, after allegedly threatening to fatally shoot highway patrol troopers who responded to a concerned caller who notified authorities of “a man lying in the roadway” Tuesday. The DWI offense is a misdemeanor, authorities said.

While in custody, Travis allegedly threatened “to shoot and kill the troopers working the case,” Sgt. Rickey Wheeler of the Grayson County Sheriff’s Office said Wednesday.

Travis allegedly refused to take a blood and breath test, and was later forced to submit to a judge’s order for a blood specimen taken at a nearby hospital, Wheeler said.

Authorities said he had been in a one-vehicle accident and was released on bond Wednesday morning.

It’s not clear whether Travis was injured in the accident, though his mug shot revealed a bruised right eye and several abrasions on his face.

Neither Travis nor his representative could be immediately reached for comment.

Travis has a star on the Hollywood Walk of Fame and has been a member of the Grand Ole Opry since 1986, his website says.

Adds the site: “Through it all, he has retained his humility, politeness and graciousness. His gentle dignity and low-key sense of humor have also remained with him.”

In February, Travis was arrested for public intoxication while sitting in his car in front of a church in Sanger, Texas.

Travis paid a $264 fine and was placed on a 90-day deferred, or probationary, status, Punches said. “It’s like a 90-day probation,” she said.

The 90-day probation period expires September 23, when the ticket violation will be erased from his record as long as Travis doesn’t commit another offense in Denton County, Punches said.

Travis’ alleged offense this week won’t impact his probation in Sanger because the incident occurred in another county in Texas, Punches said.

Public intoxication, a class C violation of the municipal code, is an offense typically disposed of by the Sanger courts with a fine and a 90-day probation, Punches said.

In February, Sanger police found a vehicle parked in front of a Baptist church in the very early morning hours and, upon investigation, discovered Travis in the car with an open bottle of wine, the Denton County Sheriff’s Office told CNN.

The police say the 52-year-old singer smelled of alcohol, the sheriff’s office said.

Travis was arrested at 1:31 a.m. on February 6 and taken to the Denton County jail, sheriff’s spokeman Tom Reedy told CNN on Wednesday.

Travis was given a citation and held because of intoxication until 7:44 a.m. the same day, at which time he was released, Reedy told CNN.

“When somebody is intoxicated, you just don’t let them go,” Reedy said. “They have to come in and be here for so many hours. It was a citation. It wasn’t a DWI. It was public intoxication.”

“I apologize for what resulted following an evening of celebrating the Super Bowl,” Travis told CNN in a statement after the February arrest. “I’m committed to being responsible and accountable, and apologize for my actions.”