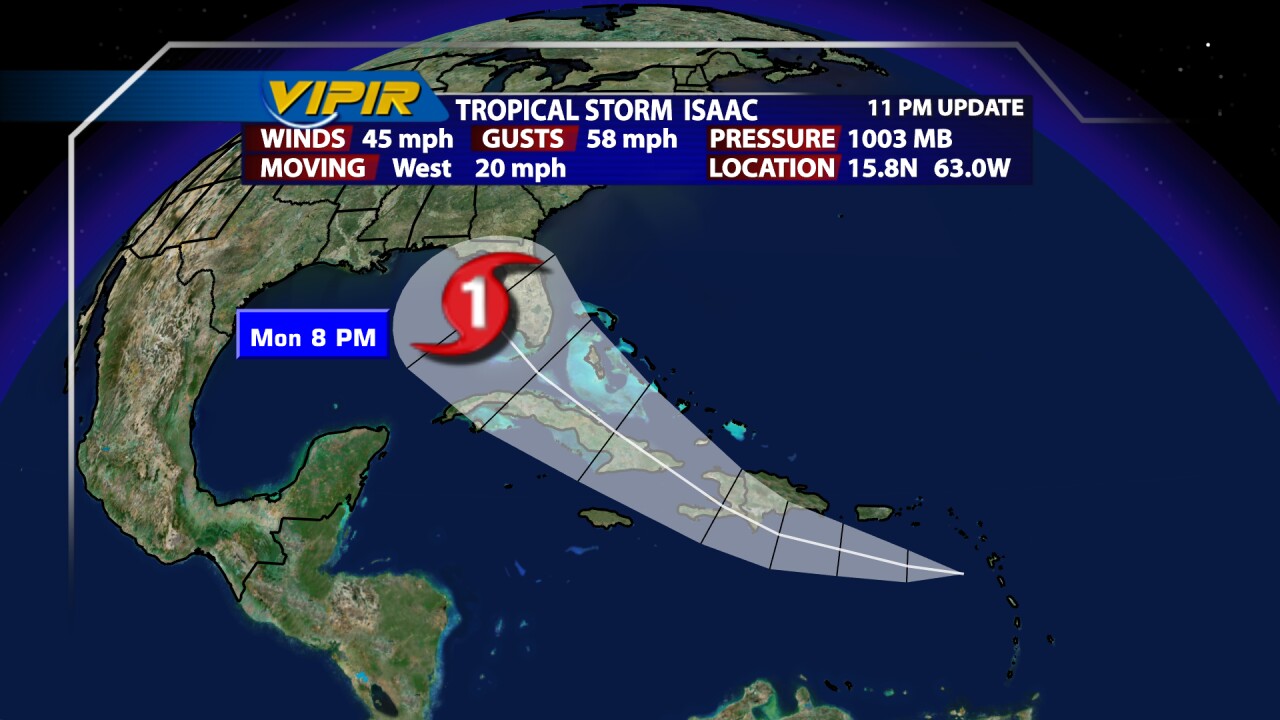 The 11pm update from the National Hurricane Center should have folks in Florida on pins and needles.

Tropical Storm Isaac looks like it’s still on a path to threaten the sunshine state early next week.  Isaac’s maximum sustained winds remain at 45 mph with some higher gusts.  The storm is moving west through the Leeward Islands at 20 mph.  Isaac is forecast to become  a category one hurricane before making landfall in Haiti Friday afternoon.  It’s expected to be downgraded to a tropical storm before moving across eastern Cuba.  Isaac will likely re-intensify into a hurricane in the very warm waters between Cuba and south Florida and skirt the west coast of Florida as a category one hurricane on Monday.  But the storm’s cone of uncertainly stretches from the Bahamas into the Gulf of Mexico, meaning it could go in either direction.  There’s a good chance that the storm could have some impact on our area no matter which path it takes.  Stay tuned.

Track the storms with our interactive hurricane tracker
Get the latest weather updates with our Live VIPIR and NewsChannel 3 apps!
Tropical Storm Isaac is a concern as GOP convention nears
Isaac prompts U.S. to cancel 9/11 hearing at Guantanamo

Tropical Depression Ten is about 1000 miles behind Isaac and moving WNW. TD 10 is expected to gradually strengthen and continue moving WNW over the next few days.

It’s too early to tell what effects Isaac will have on the U.S. mainland. But several computer models bring the storm into the Gulf of Mexico, while others move it farther east over Florida.

With roughly 50,000 people headed to Tampa for the Republican National Convention starting Monday, there is heightened interest in the path of the storm.

“We’re monitoring the situation very closely,” convention spokesman Kyle Downey said. “We are working closely with state, federal and local officials and plan on putting on a great convention.”

Tampa Mayor Bob Buckhorn said his city is prepared in case the storm comes its way.

At the U.S. naval base at Guantanamo Bay, Cuba, officials canceled the pretrial arguments scheduled to get under way in the trial of Khalid Sheikh Mohammed and four others.

Mohammed — who has been held since 2006 — is facing charges related to the September 11 attacks.

Pentagon officials said all court events at Guantanamo were canceled because of the potential hurricane. All detainees have been moved to buildings that can withstand such a storm, and those who flew in for the hearing went back home.

At 11 a.m. ET, Isaac was about 140 miles (225 kilometers) east of Guadeloupe in the Leeward Islands, with maximum sustained winds of 45 mph (72 kph) — a slight increase from earlier in the morning — and was moving west at 21 mph, the National Hurricane Center in Miami said.

Tropical storm warnings cover much of the Leeward Islands as well as Puerto Rico and the Virgin Islands.

A hurricane watch is in effect for Puerto Rico, the U.S. Virgin Islands and the Dominican Republic, which means hurricane conditions are possible within 48 hours.

“Strengthening is forecast during the next 48 hours … and Isaac could become a hurricane by Thursday,” the hurricane center said.

The center of the storm was forecast to move through the Leeward Islands on Wednesday evening and to pass south of the Virgin Islands and Puerto Rico on Thursday, before approaching the Dominican Republic on Thursday night and into Friday, the hurricane center said.

On the island of Hispaniola, home to the Dominican Republic and Haiti, 8 to 12 inches of rain, with maximum amounts of 20 inches, are possible, the center said.

Puerto Rico Gov. Luis Fortuno said the U.S. commonwealth has as many as 433 shelters ready to be activated by local mayors as the storm approaches. He said he expects rain from the system to reach Puerto Rico on Wednesday afternoon.

Aid organizations were keeping an eye on Haiti, where hundreds of thousands still live in camps after the deadly 2010 earthquake.

According to the United Nations High Commissioner for Refugees, 421,000 people are in camps in and around Port-au-Prince.

Isaac could be the first significant storm to hit Haiti since the devastating earthquake. Tropical Storm Emily threatened in 2011, but it weakened before hitting western Haiti.

“We watch those storms every single time they come near because Haiti is so vulnerable,” said Amy Parodi, a spokeswoman for the Christian humanitarian organization World Vision.

The agency has met with the government in previous summers to discuss contingency plans for major storms, and pre-positioned relief items are available, she said.

Forecasters caution that the forecast track is uncertain and the storm could be anywhere from the Bahamas to the north and the Cayman Islands to the south on Sunday.