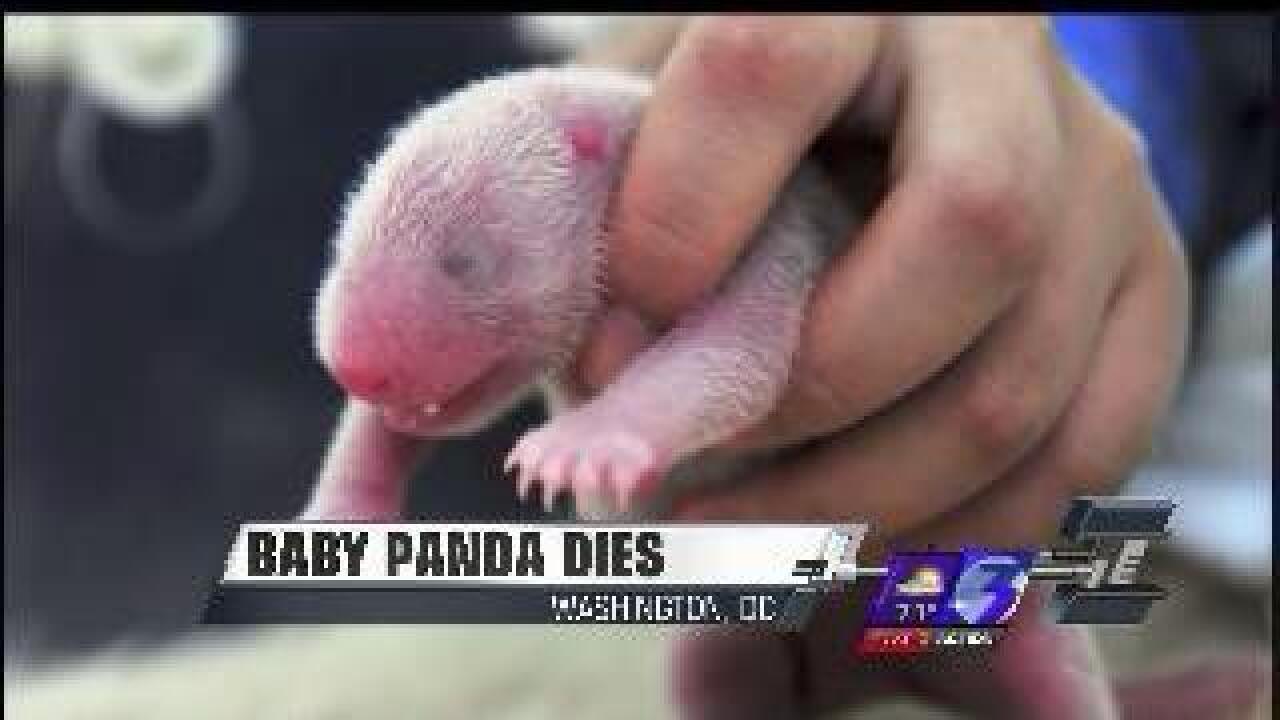 (CNN) -- Veterinarians at the Smithsonian's National Zoo in Washington have ruled out the possibility that a newborn giant panda cub was crushed by its mother, but an initial necropsy on the 4-ounce cub failed to provide a clear cause of death, officials said Monday.

The cub, believed to be a female, died Sunday, just six days after its widely celebrated birth. Just the size of a stick of butter, it had not yet been named.

The necropsy -- the animal version of an autopsy -- revealed the cub had some potentially unusual fluid in its abdomen and its liver was discolored and was hard in spots, said Dr. Suzan Murray, the zoo's chief veterinarian.

But investigators won't know if those findings are significant until lab tests and a full necropsy report come back in two weeks, she said. The initial exam revealed no obvious cause of death, zoo officials said. The cub had nursed, the exam showed, but it was unclear how well, Murray said.

The cub's mother, Mei Xiang, cradled a toy throughout the night in place of her newborn cub, but she appeared to be healthy -- eating and moving toward normal activity.

"I visited the keepers last night and early this morning," National Zoo Director Dennis Kelly said. "They have reported to me that Mei is slowly returning to her routine, she has taken water, she has begun eating both bamboo and biscuits and was offered fruit. I'm cautiously optimistic, based upon what the keepers and curators have told me, that she will slowly return to normal."

The death of the cub brought a crushing end to a joyous time at the zoo, where the birth of a new member of the highly endangered species was cause for celebration.

Public interest was also intense. In addition to a camera set up to view mother and cub, zoo officials had predicted the baby panda would push up attendance by a half-million people this year.

Keepers were alerted that something was wrong when they heard Mei Xiang honk in distress shortly after 9 a.m. Sunday. The panda cam was turned off as keepers rushed to retrieve the cub from the den. A veterinarian examined the cub and observed that it was not breathing and had no heartbeat, said Murray. CPR and other life-saving measures were not successful, officials said.

While Murray said it's hard to find anything positive in the death, she said zoo officials hope that it will help them learn more about panda reproduction and health as they strive to protect the species.

Among pandas born in captivity, about one in four males and one in four females die in the year following their birth, according to the National Zoo.

Kelly said the inquiry so far has found nothing that would indicate changes are necessary to the zoo's breeding or care program.

"Nothing suggests that, in hindsight, we would do anything differently," he said.

With a population of about 1,900, the giant panda is one of the most endangered species in the world. Kelly said investigators will carefully look at all the information associated with the cub's death in an effort to learn lessons that could help in efforts to preserve the species.

"We're going to learn from this," he said.