“I can remember putting his boots on and running around the house,” she recalled.

But that`s where her memories end.  Jimmie Stanley faced two harrowing tours in Vietnam, but it wasn`t combat that killed him.

While back in the United States, he died behind the wheel of his Ford Mustang. It was 1977 and Tina was only seven.

All she had from her father were two photographs. Long ago, her mother, maybe still struggling with grief, took all of Sergeant Stanley`s war medals, pins and photographs. She cut ties with her daughters and left Arkansas for a fresh start in Virginia. Not long after, everything was lost.

“Two days before I talked to you was the anniversary of Jim`s death. And I had stood there talking to the picture. And as I was walking away, I actually asked, I wonder what happened to his stuff,” says Tina.

So as she stood there in front of her father`s photograph, she had no idea NewsChannel 3’s Mike Mather actually had his stuff, and that he had been trying for six weeks to solve a mystery brought to him by Ryan Andrews.

For 35 years, Ryan Andrews` grandmother owned an antique shop on Military Highway in Chesapeake. One day long ago, someone sold her the abandoned contents of a storage unit, including a shadowbox.

“We believe she probably paid about $5 for this piece,” says Ryan.

So Ryan set out to find the owner. He had a name, a picture, some dog tags, but not much more. With a name as common as Jimmie Stanley, he hit a dead end.

He turned to the Investigators at NewsChannel 3.

The first stop of the investigation was Fort Eustis, and Army Transportation Museum curator Marc Sammis. He explained every medal, pin and patch in the shadowbox.

This helped Mike to figure out what the soldier had done, and where he had served, but not how to find his family. So the investigation continued.

Over several weeks, Mike Mather located military records, archived newspaper articles from Texas and Missouri and a relative`s obituary.  All of that eventually led Mike halfway across the country to a street in El Dorado, Arkansas.

His daughter told Mike Mather that all the souvenirs of her father's service vanished long ago.

“That it was placed in a storage building and that she didn`t pay rent on it. And from there, I just assume it just disappeared. Whoever got their hands on it kept it, or maybe even threw it away not knowing what it was,” says Tina.

But it was never thrown away. And now two decades after this heirloom disappeared, she was about to get it back.

To find Jimmie Stanley`s daughter, Mike Mather needed to learn about Jimmie Stanley, and his investigation uncovered stories of her father`s combat that Tina never knew, stories tucked in his file at the National Archives.  She`d never seen the Army portrait until now. The scar on his face, absent in the pictures she has, shows he was wounded in combat twice, according to his medals and military records. She had no idea what he faced in Vietnam, until Mike read to her his commendations.

“At one time, hostile fire was so intense he was forced to play dead in full view of the enemy until he could reload his weapon, fire a burst, and dash for a covered position."

Seven of the nine men in Stanley`s squad were killed or wounded that day. He earned the Army Commendation medal for his heroism. And just weeks later, he earned another medal, a Bronze Star with a 'V' for valor. He was credited with saving his entire platoon.

The shadowbox we returned to her is a little tattered from decades in storage. But she doesn`t care. It`s what`s inside - her father`s story - that is now a little more clear.

“Slowly and surely, I am collecting memories of him,” says Tina.

“Did you ever think you would have this back?” asked Mike Mather.

“No sir, not at all. Not at all. It is amazing,” says Tina. “It`s a miracle. It is an absolute miracle. I am so grateful to have it back.” 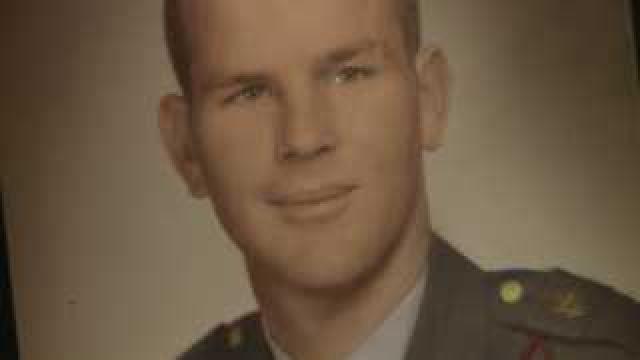