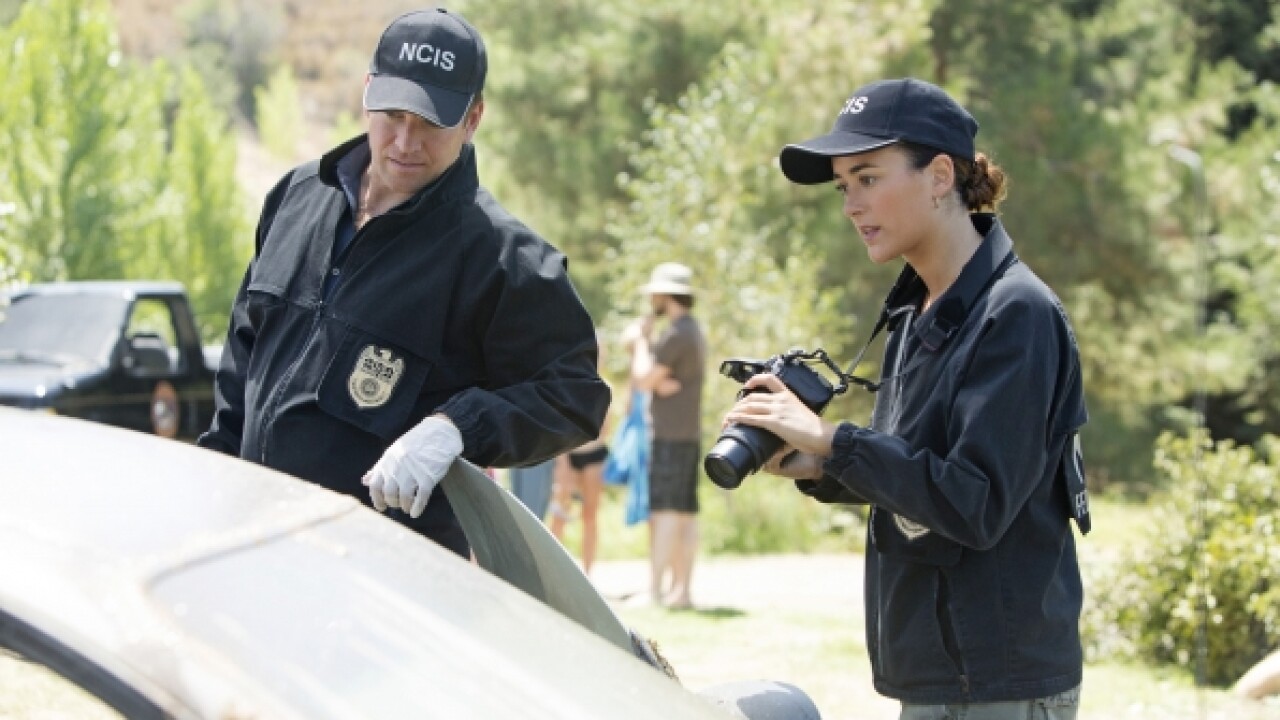 DiNozzo and Ziva look for clues after the body of a missing NCIS facilities manager is found.

DiNozzo and Ziva look for clues after the body of a missing NCIS facilities manager is found.

It took an episode but Abby is back to her old self on “NCIS.” Despite her terror, I still thought she was coping better than Vance. But the beginning of the show confused me. How does someone who sleeps in a coffin have nightmares about death?

Dad: I wondered that too. I mean she dresses in black and sleeps in a coffin. You’d think she’d be used to tight spaces.

DiNozzo wasted no time getting back to flirting. He really couldn’t pick up on the “no” vibe the decorator was giving him. I think she was brushing him off more because she was the killer, not because she had a boyfriend. Yes, that’s right. Tony tried to pick up the killer. One of the people from the NCIS armory disappeared after evacuating for the bombing. They knew she got home, so she wasn’t killed in the blast. Turns out she used to date the boyfriend of the woman who was redecorating the office. Apparently, he wouldn’t stop talking about her after he was hurt in the explosion. So the decorator killed the ex-girlfriend in jealousy.

Dad: I did not see that one coming. I just thought she was someone for Tony to flirt with.

Me: I thought she was involved.

Dad: Oh, and I was impressed with Palmer for a second tonight.

Dad: Yeah, when he snapped at them in autopsy. It was like he grew a pair and then immediately lost them when he asked if that was too harsh.

Palmer tried to get Ducky back to work by faking a need for help. In the end, it just backfired and Ducky snapped at him. It seems like a lot of the things Palmer does backfire. Like when he made the joke about Ducky almost dying. Too soon dude, too soon.

They did give us two false suspects this week. Both seemed obvious to me so I knew neither was the killer. But the guy who threatened the victim when she wouldn’t hire him did provide some entertainment for Dad.

Dad: I like when Ziva took a flying leap at the guy and tackled him to the ground. It was like she had the pair Palmer was missing.

Me: I have no words.

There was a nice bit throughout the episode with a psychiatrist who was there to evaluate the team (Side Note: I love Steve Valentine. It was nice to see him in this role. I hope he returns). You can imagine Gibbs didn’t take to that idea easily. He was more concerned about Abby than himself. In the end it was Vance who had the most problems after the explosion. But, I think what the shrink told him was right; Dearing would have found some way to get that bomb in the building. Vance’s car or not, he would have found a way.

Dad: I thought the beginning was silly. It was too touchy feely with Abby freaking out.

Me: Everyone copes differently. You should know that by now, I’m your daughter.

Dad: True. Abby is always the emotional one. I did like the reunion moment with her brother. I’d forgotten all about him. It was a nice scene.

I liked how this episode flowed. It had plenty of humor, action, and that touchy feely stuff, as Dad says. What did you think?

Dad: I liked that one part where the guy… you know the guy was….

Me: What are you talking about?

Dad: Why can’t I remember these people’s names?! I see their faces.

Dad: That could be it.

I also wanted to take a moment and offer my congrats to Mark Harmon. He got his own start on the Hollywood Walk of Fame this week. Go Gibbs!

Mark Harmon, Gibbs, receives a star on the Hollywood Walk of Fame