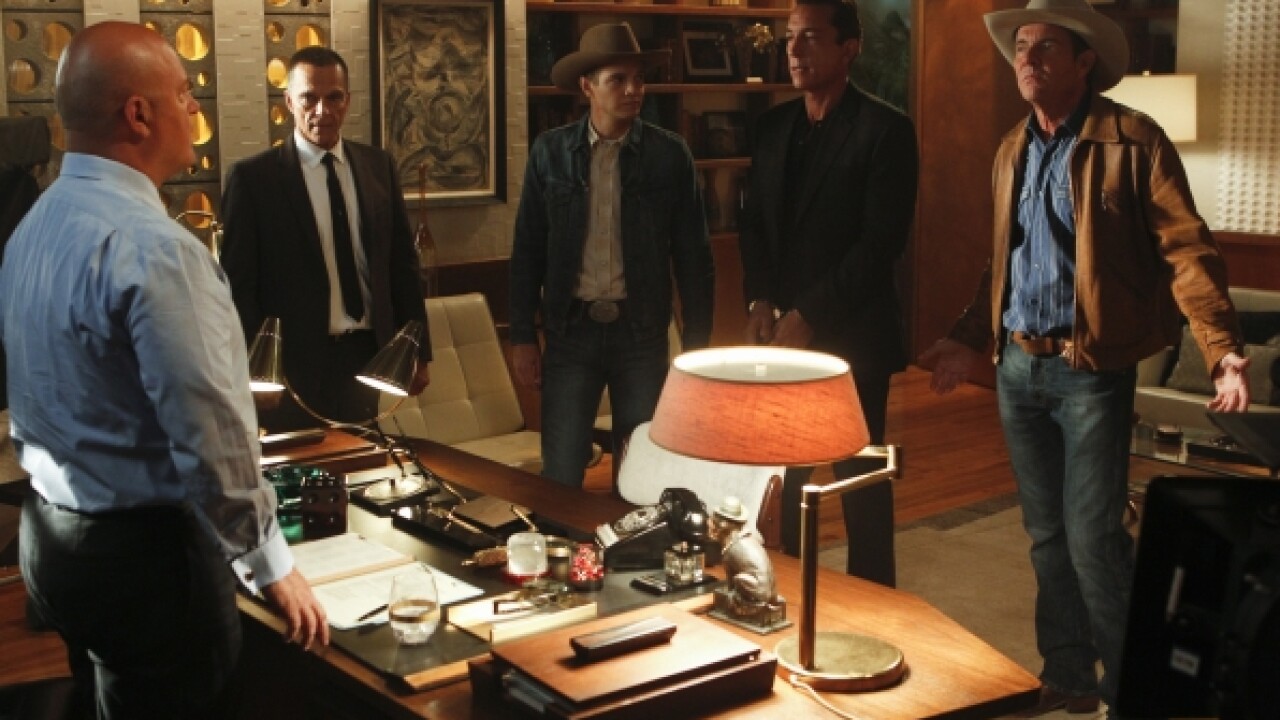 The sheriff returns Savino’s man to him after he’s caught trying to kill the accountant in jail.

The sheriff returns Savino’s man to him after he’s caught trying to kill the accountant in jail.

I think “Vegas” may be growing on me, but there are still too many cowboy hats. After the season premiere, I wasn’t sure I was going to keep watching the show. I’m still on the fence but the balance has slightly shifted. As for Dad, it’s a Western. He was hoping to like it just on the premise alone.

Me: Were cops really that violent in the 60s? I mean I know of violence during protest but this seems a little too wild, wild west for me.

Dad: That’s exactly how it was. It was the same in Jersey too. Cops handled things differently.

Me: I just thought Las Vegas would have been a bit more cosmopolitan than that.

Dad: I was around 17 when the 1960s started. Back then, Vegas was just a spot in the middle of the desert. It still is.

I did like that Episode Two featured more of the mobsters. In the premiere, I thought Michael Chiklis was going to be some sort of nice mobster, which was disappointing for a fan of the shield. Now I can see that’s not the case.

Dad: I like how he’s managing the sheriff (Dennis Quaid) instead of just getting rid of him.

Me: Did you catch the shark swimming around in his office? It was such subtle symbolism.

Dad: Yeah, but even he has a boss, so let’s see how he responds to that. I did like how he took that girl down a notch.

After losing several employees, he gave them a chance to walk out after cheating the casino, Vincent Savino gets a new money manager. I like her right off the bat. She uses her own weight to show how much extra money was skimmed off the top, after the casino’s take of course. But later, she’s put in her place when she goes over Savino and gets her Dad to change how the casino handles a “soft 17” in blackjack. Savino tells her that the idea will make them money in the beginning. She’s feeling proud of herself when he quickly flips the narrative. He explains they will end up losing even more than they make because true blackjack players won’t want to play in a casino that hits on the “soft 17.”

Dad: Here this young girl comes thinking she knows better and he quickly shoots her down. Ha, ha, ha.

Me: She does need to learn who the boss is and how things work in the real world. There’s no crying to Daddy when you don’t get your way.

Dad: If you did that I’d just laugh at you.

Dennis Quaid’s character, Ralph Lamb, fell into the sheriff’s seat when the real one disappeared. We found out he was actually being paid off by Savino. Oh, and the D.A. is dirty too, naturally. Lamb deputized his brother and troublesome son to help him hunt down killers. This is where it got too predictable for me in the second episode. The killer was obvious and so was the son coming to the rescue after his Dad told him to stay in the car.

Dad: I just watch the show. I don’t sit there and try to find the killer. I think you just like figuring it out before the show reveals it to us.

Dad: You need to just go with the flow.

Dad and I do agree Dennis Quaid needs to loosen up a bit. His character is based on the real Ralph Lamb, who served as the sheriff during the 60s and 70s. I think maybe Quaid is trying too much to be like him and is coming across very wooden. We’ll see how it plays out. There was one plot point that Dad and I don’t agree on.

Me: Did you pick up on the beginning of the love triangle?

Dad: What are you talking about?

Me: When the sheriff walked the A.D.A. to her car and the brother was staring at him. Then he said something about thinking the Sheriff ate alone.

Dad: I thought that was just meant to be a brother being happy someone took a shine to the sheriff.

We’ll see who was right… What did you think about “Vegas?” Will you add it to your must see list?