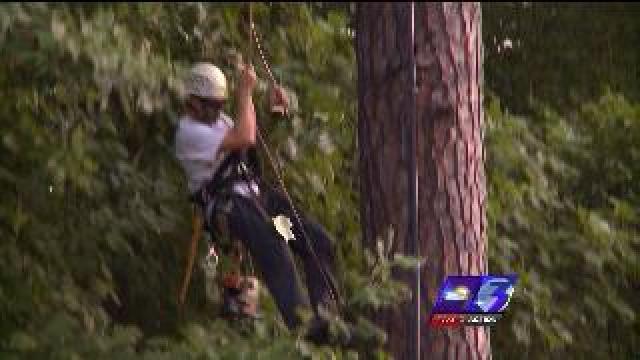 Thursday morning, the city of Norfolk removed an eagle nest from the Norfolk Botanical Garden.

NewsChannel 3 was there as the removal took place.

According to the City of Norfolk, “The eagle’s nest was not as large or intertwined as thought, tree climbers removed it by hand in less than an hour.”

It was expected to take several hours – but it only took this tree company several minutes to take down the Bald Eagle’s nest.

The garden’s board and the City of Norfolk decided to take the Eagles nest down because of its close proximity to the airport’s runway.

In the last ten years, four Bald Eagles have collided with aircraft from the Norfolk airport.

Just last year – a mother Eagle died and several Eaglets had to be removed and raised by hand before being released back into the wild.

“If the Eagle nest is farther away from the airport, they are in safer nesting situation there, lives are being preserved. It’s not that we’re getting rid of the Eagles, it’s that we’re helping preserve the Eagles.”

Many opposed the decision to remove the Eagles’ home.

James Ellis, who has been tracking local Bald Eagles for nearly a decade, feels his concerns were ignored.

“I think it’s a tragic failure of the city and the gardens to communicate with the citizens and the taxpayers.”

“I’m not worried that the Eagles will come back, I’m just hoping that the eagles find a location not as close to the airport that is going to put them in danger the way it has in the past.”