Group tries to save the rusting SS United States

She was longer than the Titanic and much quicker. Few knew her secret. Her engines and propellers were developed as Cold-War weapons. She was a luxury liner, but in one sense, that was a disguise. She was built for speed. If the Soviets grew restless, she could race troops across the ocean at more than 44 miles an hour.

And on her record-breaking maiden voyage in 1952, no one knew she`d be the last of her kind.

She carried presidents and Hollywood celebrities and immigrants to this country. After serving just 17 years, she was abandoned.

She rusted in Norfolk for decades and now she bobs idle in Philadelphia. The nation`s flagship is junked. She`s a ghostly relic, barely a step ahead of the scrappers.

"This is living history. Once this ship is gone, it will never be replaced. It is the last of the American ocean liners. It was built in Newport News. We cannot lose this ship," says Dan McSweeney.

Deep in the once-secret engine room where neither sunlight nor electricity penetrates, gauges are frozen in time. Many are missing. An outdated CPR poster has sat untouched 40 years. The rest of the once-mighty United States has been gutted, the valuables sold at auction.

Rosalyn McPherson was a young girl when her family sailed the United States to Europe. Decades later, she stumbled upon the ship again.

"When I first moved to Philadelphia 12 years ago, I was riding to the airport and looked up and saw the ship out here, and it broke my heart, seeing the condition it was in and knowing how beautiful a vessel it had been when I traveled it," says McPherson.

Now she is part of a charity trying to re-invent and redevelop the United States. To dock her in a waterfront city. To remake her as apartments for young professionals, ballrooms for holiday parties, retail stores, restaurants, office space, and a museum.

Maybe even a Mad-Men themed hotel, a nod to the ship`s heyday in the 50s and 60s.

So where would she go, this ocean liner that was once the pride of local shipbuilders? How about right here, back to the rivers where she first floated.

"The three areas that have expressed an interest in this are Miami, New York, and greater Philadelphia. However, we recently heard from a group that is very preliminarily interested in looking at the ship in Norfolk," says Dan McSweeney, commercial developer. 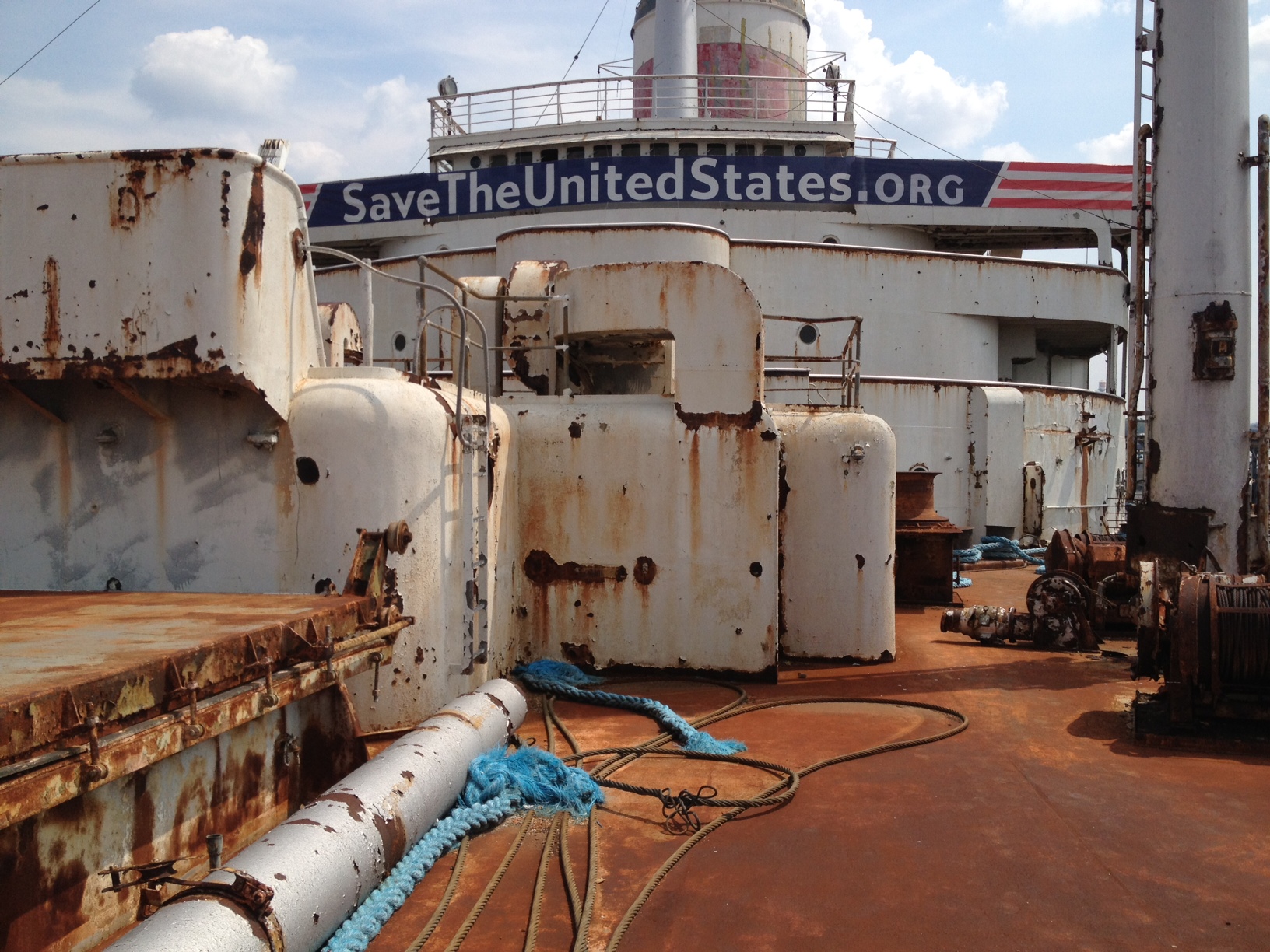 The United States could come back to Hampton Roads. She would be the largest commercial structure in the region, 500,000 square feet for just about any use. It`s Dan McSweeney`s job to convince investors.

"We already have the bare bones. All we have to do is augment them. That`s not an impossible task at all," says McSweeney.

This charity is probably the last chance for the nation`s flagship, built with pride in Newport News. Before the United States Conservancy bought her, a series of owners announced big plans that all fell short. And every year she sits here, she crumbles. Flaking paint flutters on the promenade`s walkway.

The decks where passengers once played games are peeling. The ballroom with its circular dance floor is empty and dusty. The bridge is bare, save for a single original table. The kitchens and the bars are vacant and neglected. The first-class staterooms are now just outlines on the main deck. But to Susan Gibbs, granddaughter of the architect, this ship is solid, and ready for a rebirth.

"Yes, the paint is peeling. But her hull strength is still 92 percent of original," says Gibbs.

It will cost $25 million just to restore her decks and metal skin. So, on the 60th anniversary of her record-breaking voyage, the charity is launching a massive fundraising effort, called "Save The United States."

They`re wooing the deep pockets of philanthropists, and also dollar-a-pop donors through Facebook. The Mariners' Museum in Newport News, home to many of her artifacts, has unfurled for the first time in 60 years the massive pennant called the Blue Riband. It`s the prize awarded to the Atlantic`s fastest ship. It still belongs to the United States.

There is some precedence for a project like this. The Queen Mary, once a luxury liner, is now a hotel in Long Beach, California. McSweeney, the man charged with cultivating businesses, says the United States, docked maybe in Norfolk, could do just as well.

"It`s a patriotic effort, but it is also one that is very practical. We can create several thousand jobs, we can help generate tax revenue, and we can help redevelop a waterfront district," says McSweeney

If this doesn`t work, The United States will probably head to a scrapper- a fate the charity is doing everything to avoid.

"We have to do our part to make sure people understand this is something you can`t just get rid of. You can`t just scrap this ship. It`s tantamount to scrapping the Spirit of St. Louis," says McSweeney"

PHOTOS: Save the SS United States